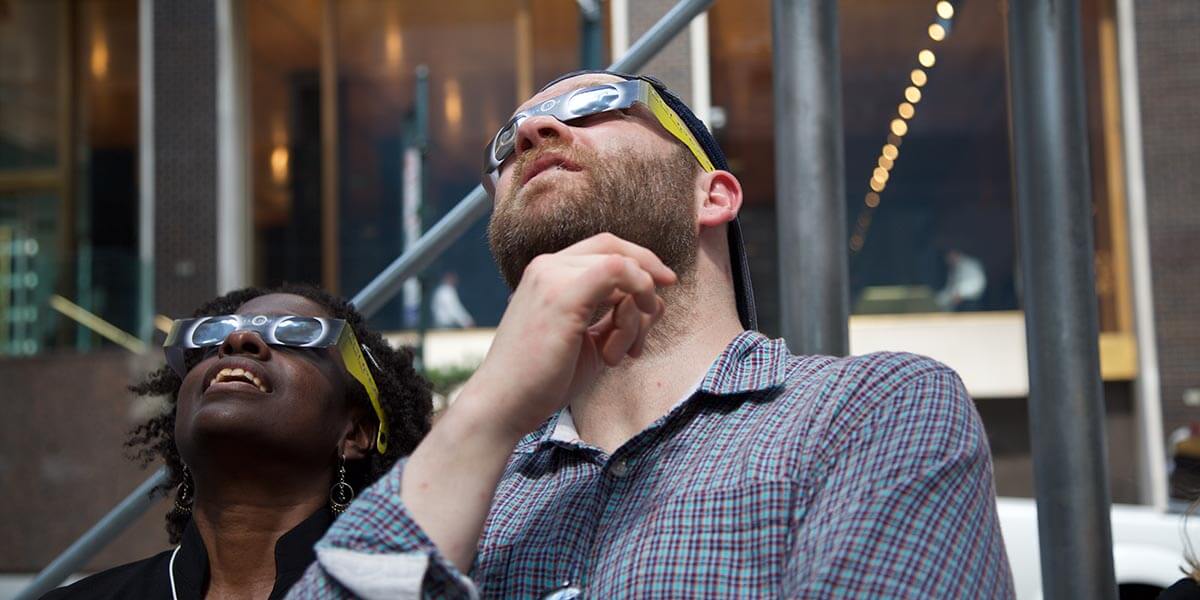 Angelica Kerr, Publishing Support Insights Specialist, and Michael Weston, Executive Publisher, Ophthalmology and Pathology, watch the exclipse outside Elsevier's New York Office. Michael came with plenty of glasses for those of us who waited too long to buy them. (Photos of New York by Alison Bert) 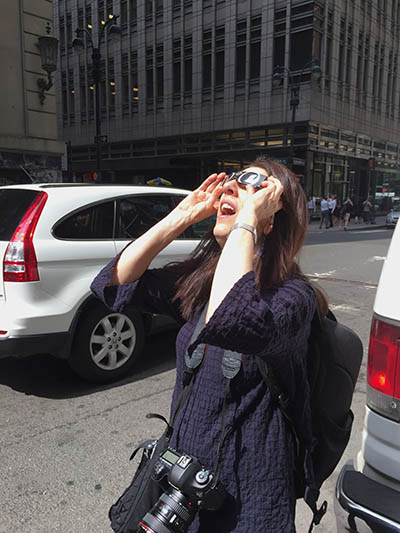 In the hour before the eclipse would begin in New York, Michael Weston's desk was a popular spot. You see, those of us who waited too long to buy eclipse glasses were out of luck. Stores were sold out, and people were selling them on the street for $40.

But Michael had a stash. As Executive Publisher of Elsevier's Ophthalmology journals, he had asked our partners at the American Academy of Ophthalmology where he could buy safe glasses. He bought 25 pairs. Now, word spread around the office that he was selling them at cost for just $6 each.

So with our glasses in tow, we headed downstairs to witness a partial solar eclipse, where the moon would cover about 70 percent of the sun. That's me to the right getting my first glimpse.

Here, are the photos I took of my colleagues and the fellow New Yorkers we shared the experience with — followed by photos from St. Louis, where our colleagues witnessed a total eclipse. We'll post more pics as we get them from other offices.

Eloisa Weitner, 6, just moved to New York from the Netherlands with her family last week. As they were strolling on Park Avenue, she spied our team of eclipse observers. Soon, she got a lesson from Rebecca Capone, a Publisher for Elsevier's Computer Science portfolio, who showed her how to use a pinhole projector crafted from two sheets of paper. 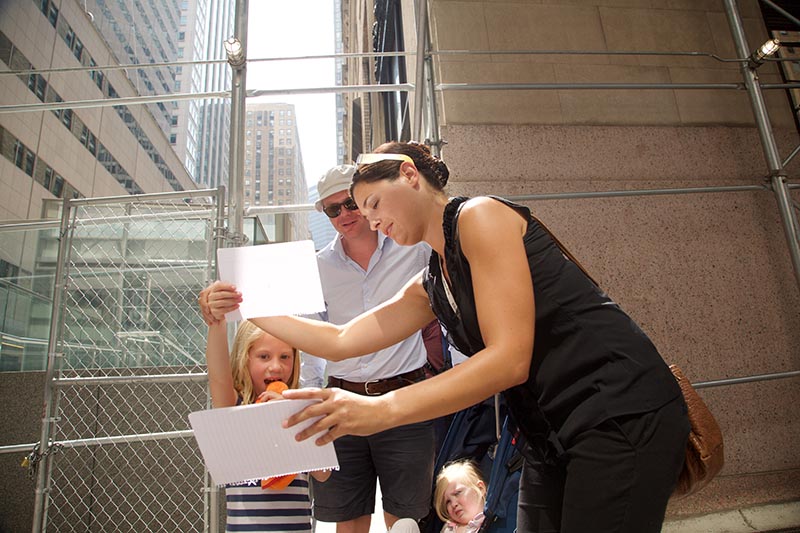 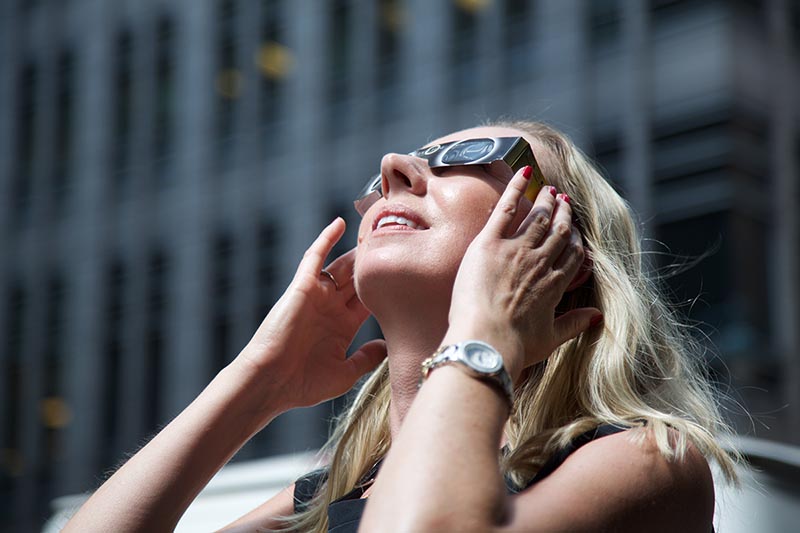 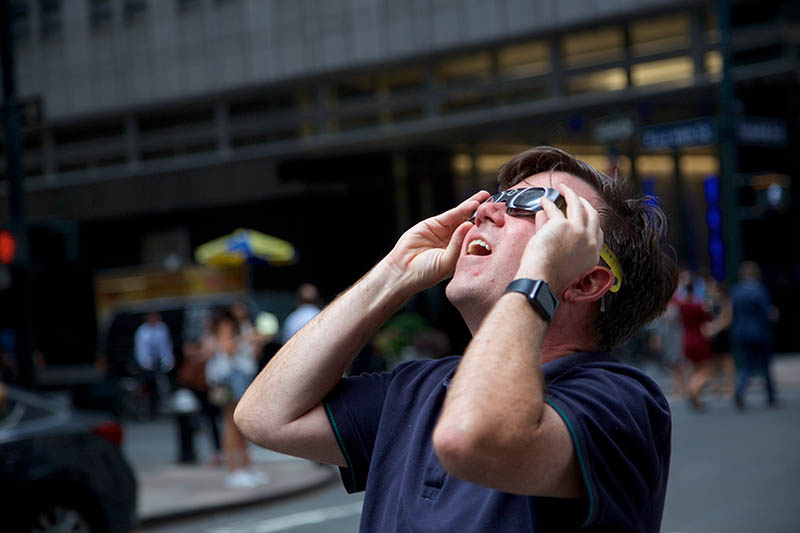 Carol Elias, who works in our building, came out to experience the eclipse, but she didn't have eclipse glasses. So we gave her a spare pair. After having a look ... 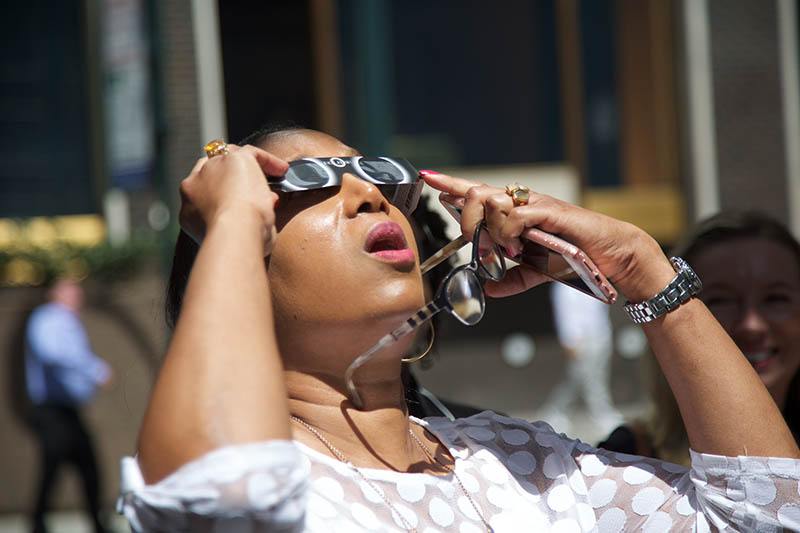 ... she shared them with her colleagues. 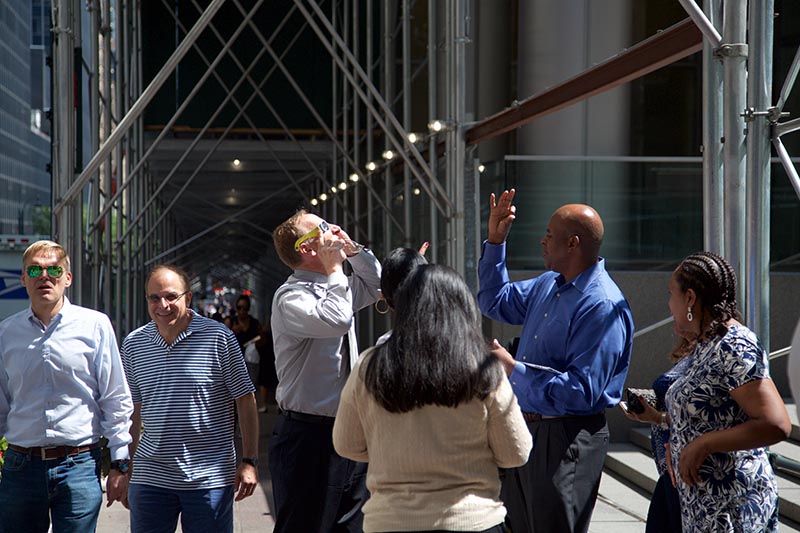 Don't try this at home!

Angelica Kerr consulted the NASA website for instructions on how to photograph the eclipse with her smartphone — without ruining the phone or her eyes. Here she is with three of our colleagues (and a guy who thinks it's OK to watch the eclipse if he squints and shades his eyes). 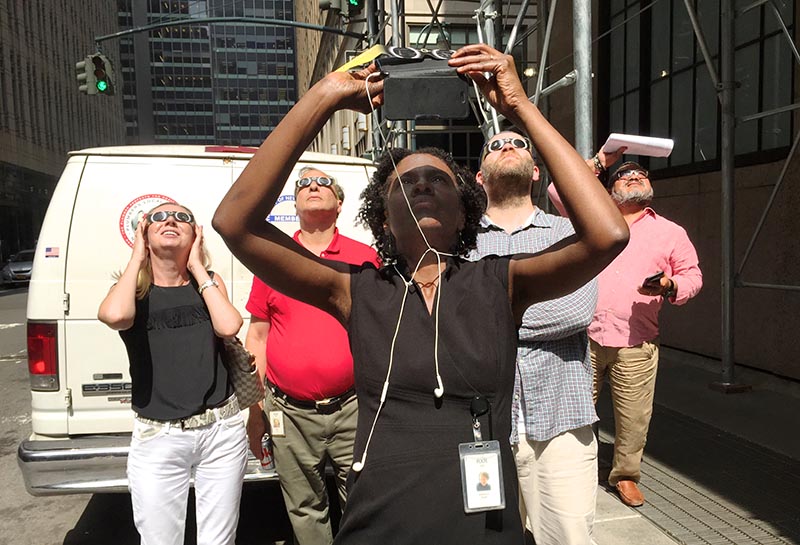 "You can feel the shadow on you"

With minutes until peak eclipse time, Michael handed his glasses to Suzanne Thompson, an Account Support Coordinator at Elsevier. "I'm a science geek anyway, so I love this," she said, after seeing the moon cover nearly 70 percent of the sun. 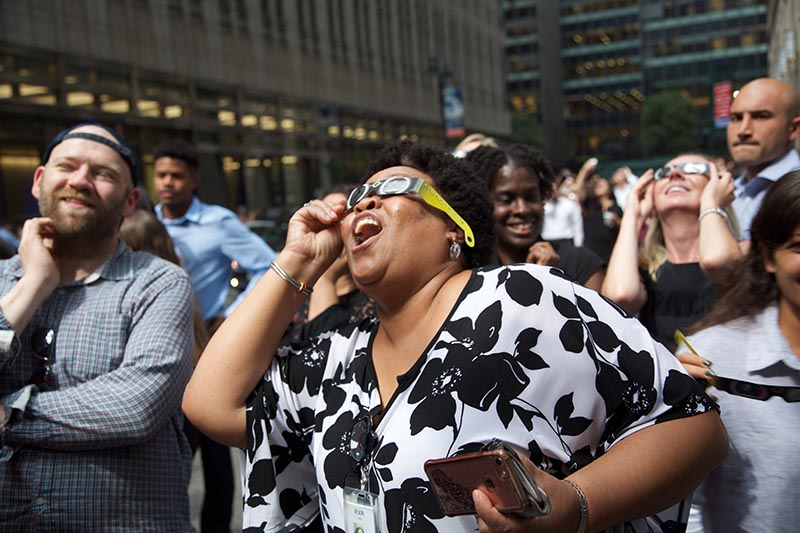 Suzanne said she could sense the eclipse even before seeing it in the sky:

Waking around, you can feel it — you can feel the shadow on you. It's approaching dusk but not really. I think it's because intellectually I know it's daytime.

Meanwhile, the crowds continued to grow until peak eclipse time of 2:44 p.m. 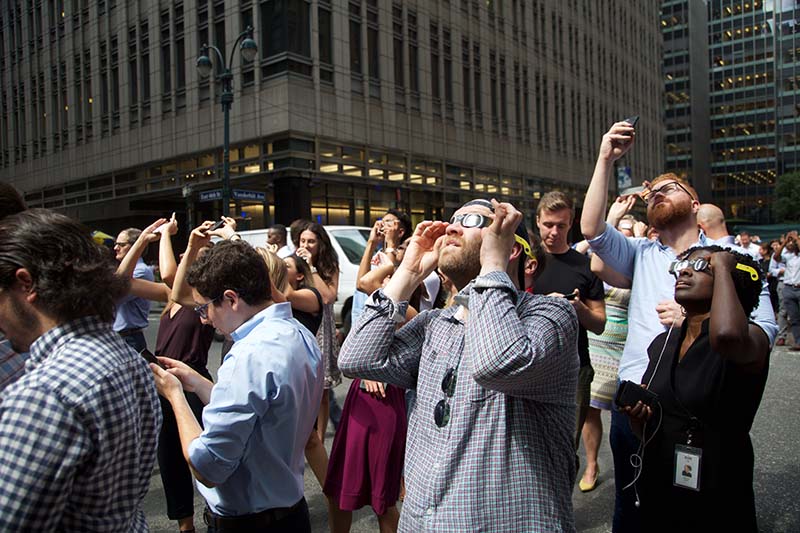 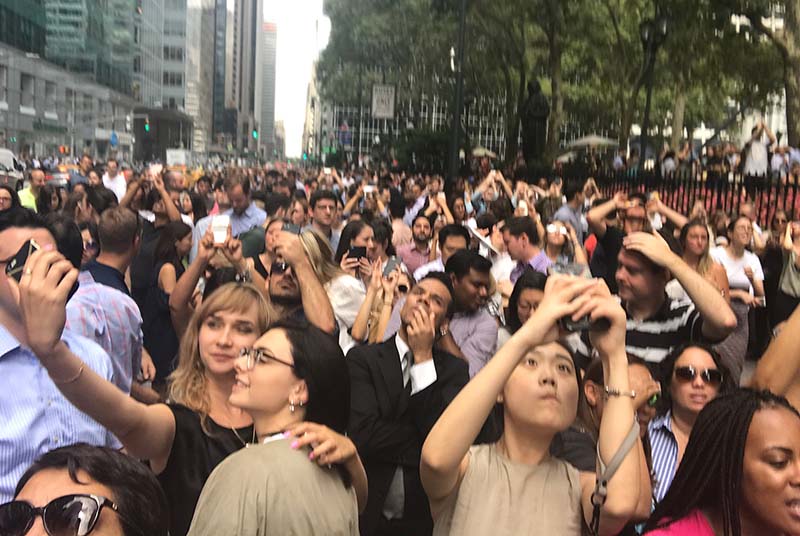 And in St. Louis — totality!

Employees in St. Louis were fortunate to be able to witness a total eclipse. While some took the day off to experience this historic occasion, others gathered outside with their glasses. Jeffery Bryant, Manager and Technical Support Consultant for Operations, photographed the eclipse and his colleagues watching it. 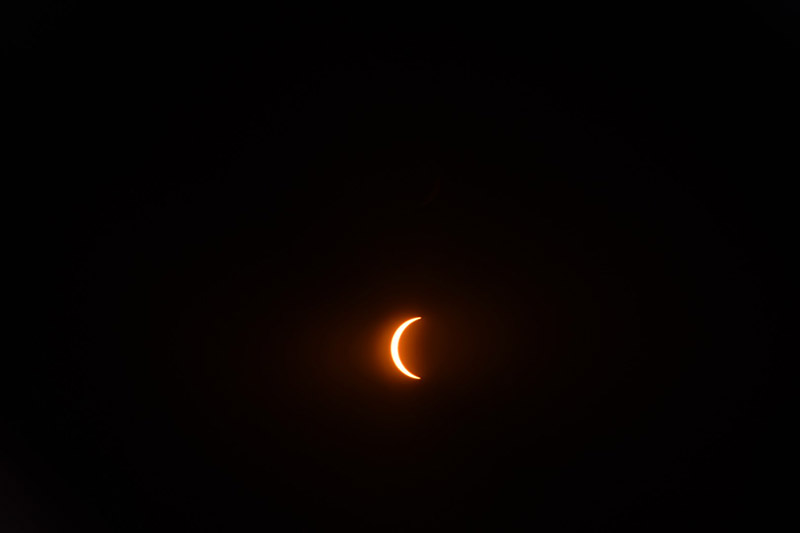 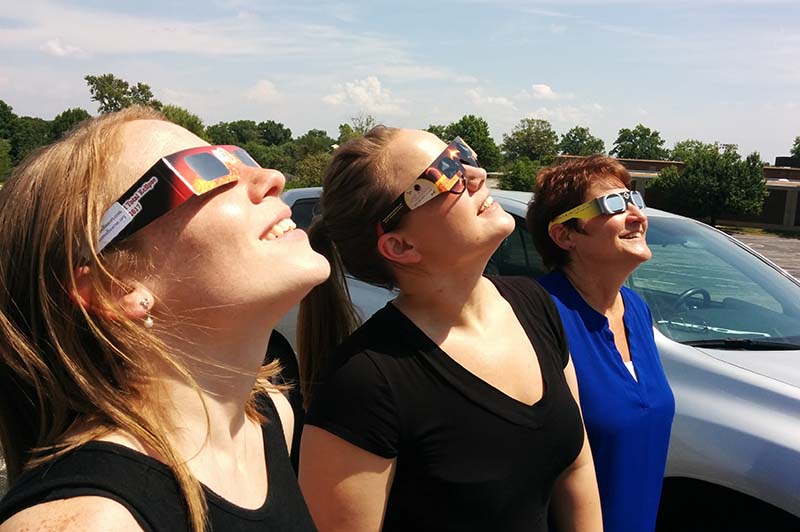 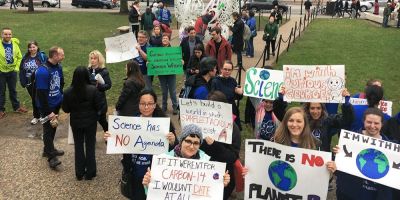 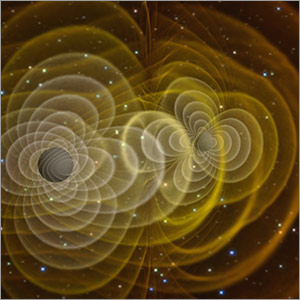