Ice explorers in Tibet use chemistry to gaze into the past

The ice core is a fascinating source of information about the earth’s history; scientists have studied ice samples from around the world for decades to get a glimpse into our past. By analyzing the chemicals in the ice core, scientists can look back over the last 800,000 years at our climate and better understand climate change.

One such source of ice core samples is the Tibetan Plateau. One of the cleanest regions in the world, it is a huge area that covers about 1,000 kilometers north to south and 2,500 kilometers west to east in western China and India. The glaciers provide vital water for people in the region, but they’re retreating at an alarming rate, putting the water supply in jeopardy for more than 1 billion people. 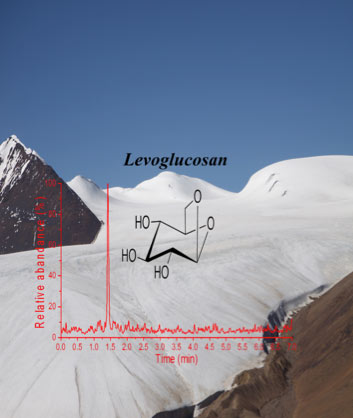 It’s a familiar picture: glaciers melting and crashing into the sea or feeding rivers. Rising global temperatures are contributing to this, and previous research has pointed to molecules in the air called carbonaceous aerosols as another cause. Carbonaceous aerosols are commonly produced by burning fossil fuels. However, almost half of the carbonaceous aerosols in south Asia that are affecting the Tibetan ice are produced when people burn biomass, such as trees.

Studying the aerosols trapped in the ice of the glaciers can give scientists insights into the history of biomass burning and how it is related to climate change and glacial melting.

In a new study published in Talanta, researchers developed a method to help scientists identify a molecule called levoglucosan, which can identify carbonaceous aerosols that came from biomass burning.

The researchers behind the new method, from the Institute of Tibetan Plateau Research, Chinese Academy of Sciences, say their work will enable scientists to spot the molecules produced by burning forests more easily. This will help them understand the history of fires in the region, adding to the picture of how humans are contributing to climate change.

Lead author Chao You, a PhD candidate at the Institute of Tibetan Plateau Research, part of the Chinese Academy of Sciences in Beijing, explained:

Carbonaceous aerosols can tell the story of biomass burning in a region, helping us understand more about how human activity has shaped glaciers over time. But it’s quite difficult to identify the molecules that tell us when these aerosols were released, so we wanted to come up with a better method to use in Tibet.

Researchers often look for levoglucosan in snow and ice in Antarctica and the Arctic. However, ice from the Tibetan Plateau contains many more complex molecules, such as sugar and sugar alcohol, making it much harder to spot the levoglucosan.

Usually researchers use a technique called High Performance Liquid Chromatography (HPLC) to identify levoglucosan in snow and ice samples. However, because of the insoluble particles in the Tibetan ice, using this method without pre-treating the samples can actually harm the system. Furthermore, levoglucosan is present at such low concentrations in the Tibetan ice that standard methods often can’t identify the molecules.

Mr. You and his colleagues developed a method that can detect levoglucosan at tiny concentrations in snow and ice samples. The researchers first melted the ice, filtered it and mixed it with acetonitrile. They then analyzed the mixture using chemistry analysis called ultra-performance liquid chromatography combined with triple tandem quadrupole mass spectrometry. They then analyzed the levoglucosan in the sample.

The method is very sensitive: the team could identify levoglucosan at a concentration of only 110 nanograms per liter of ice. They could use the method with small samples of only 0.5ml. Also, the method is not just suitable for Tibetan ice, but for samples from any low and middle latitude glaciers around the world. Mr. You explained:

I am interested in finding more evidence of biomass burning in Tibetan glacier snow and ice. To do this, we improved and tested this new method for identifying levoglucosan quickly and accurately in Tibetan ice and snow. Our method can reveal more detailed information about the environmental process and changes that happened in Tibetan glaciers.

Since they can come from burning fossil fuels, organic aerosols in the ice can also paint a picture of past industrial activity. In a study published in Atmospheric Environment, researchers at Hokkaido University in Japan and the Institute of Atmospheric Physics, Chinese Academy of Sciences tested ice core samples from Alaska.

They looked for evidence of two types of chemicals, called monoterpene and isoprene organic aerosols. The team found a link between the presence of the two chemicals over time in the ice core, with both reflecting the same trends since the 1660s.

Organic aerosols can also come from plant debris, fungal spores and other biological sources. The researchers found that the concentrations of one substance – called C5-alkene triols – have increased since the Great Pacific Climate Shift of the 1970s, when the climate changed abruptly. They believe this is due to increased emissions from biological processes in the ocean, linked to changes in the climate.

Elsevier has made the following articles freely available until 14 March 2016:

Chao You graduated from Sichuan University in China in 2009 with a Bachelor of Engineering degree. He is currently a PhD candidate at the Institute of Tibetan Plateau Research, part of the Chinese Academy of Sciences in Beijing, China. His supervisor is Prof. Yao Tandong, who is well known for glacier and climate change on the Tibetan Plateau.

Talanta is the International Journal of Pure and Applied Analytical Chemistry. The journal publishes research from all branches of pure and applied analytical chemistry, including original research papers on fundamental studies, novel sensor and instrumentation development, novel or improved applications in areas such as clinical and biological chemistry, environmental analysis, geochemistry, and materials science and engineering.

After a few accidents, Lucy Goodchild van Hilten discovered that she’s a much better writer than a scientist. Following an MSc in the History of  Science, Medicine and Technology at Imperial College London, she became Assistant Editor of Microbiology Today. A stint in the press office at Imperial saw her stories on the front pages, and she moved to Amsterdam to work at Elsevier as Senior Marketing Communications Manager for Life Sciences. She’s now a freelance writer at Tell Lucy. Tweet her @LucyGoodchild.