How science is changing our relationship with peanuts

They’re nuts, but not actually nuts. They put the crunch in your Snickers and the protein on your toast. But they’re also the source of millions of allergic reactions, and even deaths, worldwide.

Peanuts: love them or hate them, they have a big impact on the world. March is National Peanut Month in the United States, so we’re taking a look at what’s new in peanut allergy research – and what else peanuts are useful for in 2015. 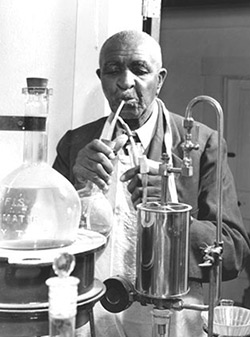 The peanut – Arachis hypogaea – is actually a legume, more closely related to the pea than its more distant cousin the nut. Originally the product of two different species, the peanut was domesticated in South America thousands of years ago. It was mainly grown for use in animal feed until the early 20th Century, when people like botanist George Washington Carver started to recognize its potential.

More people eating peanuts meant more people suffering from allergic reactions and, more seriously, anaphylactic shock. Around 0.6% of people in the US are allergic to peanuts, with reactions ranging from itchiness and minor swelling to anaphylaxis and death.

As with many other allergies, the advice has changed over the years on how to best prevent the development of a peanut allergy. Recent press coverage of new scientific research surprised parents around the world, suggesting that feeding infants small amounts of food containing peanuts could actually help prevent the children form developing peanut allergies.

The New England Journal of Medicine study was reported widely, “turning what was once conventional wisdom on its head,” according to the New York Times. But what else is research telling us about avoiding peanut allergy?

New research published in the Journal of Allergy and Clinical Immunology suggests that almost a quarter of peanut allergies in infants resolve themselves by the age of 4. For the first time, researchers determined the test result thresholds that predict whether an infant allergy will remain into childhood.

By pricking the skin with a small amount of peanut allergen, the researchers could test whether infants were allergic to peanuts. The size of the wheal – the red spot around the prick test – predicted whether the infants would still be allergic to peanuts several years later, with larger wheals predicting persistent allergy.

Scientists are also looking at the causes of peanut allergies, and a new study published in the Journal of Allergy and Clinical Immunology says that for babies with a skin condition, even dust could be a risk factor.

Eating peanuts, or food containing peanuts, can result in tiny amounts of peanut sticking to dust particles. Those particles are dispersed in the air, landing on the skin of people living in the house. The researchers found that babies with atopic dermatitis react to these peanut-laden dust particles, being more likely to develop a peanut allergy.

Peanuts are allergenic – they induce allergic reactions – because of certain molecules they contain: to date, 13 different allergenic molecules have been discovered in peanuts (Ara h1-Ara h13). Since these molecules cause an allergic reaction in some people, one approach to avoiding allergies is to alter the molecules so that they no longer cause a reaction. 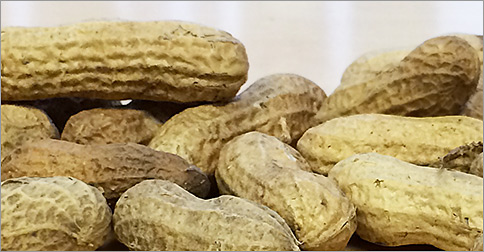 Botanist George Washington Carver allegedly compiled an extensive list of as many as 300 peanut byproducts and uses in the early 20th Century. The list covered everything from dyes to medicines; here are five that may surprise you:

Boiled peanuts are a favorite in the American South. Here's a simple recipe.

Peanuts of the future

Much of our peanut-related attention goes to their role in allergies, and their use in food. But in the future, peanuts may play an increasingly important role in other aspects of our lives. For example:

New research published in Food Chemistry shows that coating peanuts in olive oil could make them less likely to cause an allergic reaction. Oleic acid is a fatty acid found in many oils, including olive oil. Oils containing oleic acid are increasingly popular in the food industry due to their health benefits. Oleic acid binds to different proteins, including peanut proteins, changing the way they behave.

The researchers found that the oleic acid stopped the peanut allergens from binding to a human immune molecule, indicating that the acid would stop the peanut molecules from causing an allergic reaction.

Another way to alter the allergy-inducing peanut proteins is using enzymes. A study in Food Research International suggests that treating peanuts with a digestive enzyme could make them less allergenic. The researchers first treated the peanut kernels with sound waves – a process called sonication – and then incubated them with an enzyme that can break down allergenic proteins.

The results showed that after treatment the proteins no longer bind to immune molecules. The researchers also tested this further with a skin prick test, showing that the peanuts did not induce an allergic reaction.

Despite the exciting developments in treating peanuts to make them less allergenic, and the new knowledge we have about how to prevent the development of allergies, many people are still dangerously allergic to peanuts. For them, detection is key.

A recent study in Regulatory Toxicology and Pharmacology underlines the importance of setting thresholds for peanut protein concentrations in food. Researchers undertook the biggest study to date of people with peanut allergies, investigating their food buying habits and how this related to their anxiety levels. The researchers are now analyzing the results of the study further.

Tiny amounts of peanut proteins can cause serious allergic reactions, so being able to detect trace amounts of peanut in foods is vital for food safety, and required for labeling. New research published in Food Control shows that the success of detection techniques depends on many factors, including the nature of the test, the protein being looked for, and the way the food being tested has been processed.

The researchers tested cookies that contained peanut butter and found that the way the peanut butter was manufactured had a significant effect on the test: if peanuts were roasted before being made into butter, the proteins were more difficult to detect. This was also the case after baking. Significantly, roasting and baking has been shown to worsen the allergic responses to peanut proteins, so combined with lower detection rates this can have serious consequences.

Elsevier has made these articles freely available until June 25, 2015: