How much exercise is too much?

There is strong epidemiological evidence of the importance of regular physical activity, such as brisk walking and jogging, in the management and rehabilitation of cardiovascular disease and in lowering the risk of death from other diseases such as hypertension, stroke and type 2 diabetes. The Physical Activity Guidelines for Americans recommends about 150 minutes per week of moderate-intensity exercise or about 75 minutes of vigorous-intensity exercise. 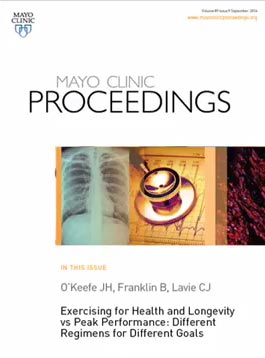 But there is clear evidence of an increase in cardiovascular deaths in heart attack survivors who exercise to excess, according to a new study published in Mayo Clinic Proceedings.

[pullquote align="right"]"Results suggest that the benefits of running or walking do not accrue indefinitely and that above some level — perhaps 30 miles per week of running — there is a significant increase in risk."[/pullquote]

This study confirmed previous reports indicating that the cardiovascular benefits for walking and running were equivalent, as long as the energy expenditures were the same (although when walking, as compared to running, it will take about twice as long to burn the same number of calories).

Remarkable dose-dependent reductions in deaths from cardiovascular events of up to 65 percent were seen among patients who were running less than 30 miles or walking less than 46 miles per week. Beyond this point, however, much of the benefit of exercise was lost in what is described as a reverse J-curve pattern.

"These analyses provide what is to our knowledge the first data in humans demonstrating a statistically significant increase in cardiovascular risk with the highest levels of exercise," Drs. Williams and Thompson wrote. "Results suggest that the benefits of running or walking do not accrue indefinitely and that above some level, perhaps 30 miles per week of running, there is a significant increase in risk. Competitive running events also appear to increase the risk of an acute event."

However, they point out that "our study population consisted of heart attack survivors and so the findings cannot be readily generalized to the entire population of heavy exercisers."

Exercise for elite athletes — and the rest of us

In the same issue, investigators in Spain report on a meta-analysis of 10 cohort studies aimed at providing an accurate overview of mortality in elite athletes. The studies included over 42,000 top athletes (707 women) who had participated in a range of sports including football, baseball, track and field, and cycling, including Olympic level athletes and participants in the Tour de France.

"What we found on the evidence available was that elite athletes (mostly men) live longer than the general population, which suggests that the beneficial health effects of exercise, particularly in decreasing cardiovascular disease and cancer risk, are not necessarily confined to moderate doses," comments senior investigator Dr. Alejandro Lucia of the European University Madrid. "More research is needed however, using more homogeneous cohorts and a more proportional representation of both sexes."

"Extrapolation of the data from the current Williams and Thompson study to the general population would suggest that approximately one out of 20 people is overdoing exercise," said Dr. James H. O'Keefe, a cardiologist at St. Luke's Mid America Heart Institute in Kansas City, Missouri, and first author of an editorial on "Exercising for Health and Longevity versus Peak Performance: Different Regimens for Different Goals," which appears in the same issue. Along with co-authors Carl "Chip" Lavie, MD, and Barry Franklin, PhD, he explains that "we have suggested the term 'cardiac overuse injury' for this increasingly common consequence of the 'more exercise is better' strategy."

Even so, these authors state that about 10 out of every 20 people are not getting the minimum recommended amount of physical activity (>150 minutes/week of moderate exercise).[divider]

How much exercise is safe?

Drs. O'Keefe, Franklin and Lavie point out that a weekly cumulative dose of vigorous exercise of not more than about five hours has been identified in several studies to be the safe upper range for long-term cardiovascular health and life expectancy, and that it may also be beneficial to take one or two days a week off from vigorous exercise, and to refrain from high-intensity exercise on an everyday basis. They propose that individuals from either end of the exercise spectrum (sedentary people and over-exercisers) would probably reap long-term health benefits by changing their physical activity levels to be in the moderate range.

Dr. Lavie, a cardiologist at the John Ochsner Heart and Vascular Institute in New Orleans, summed up their findings:

For patients with heart disease, almost all should be exercising, and generally most should be exercising 30 to 40 minutes most days, but from a health standpoint, there is no reason to exercise much longer than that and especially not more than 60 minutes on most days. As Hippocrates said more than 2,000 years ago, 'If we could give every individual the right amount of nourishment and exercise, not too little and not too much, we would have found the safest way to health.'

"I and my co-authors believe this assessment continues to provide wise guidance," he concluded.

All three articles are freely available online in Mayo Clinic Proceedings in advance of Volume 89, Issue 9 (September, 2014), published by Elsevier: