Honoring a luminary in advance of #NuMat2014 Nuclear Materials Conference

Dr. Claudio Ronchi was presented the Robert Cahn Award in a special ceremony in Karlsruhe, Germany

When Dr. Claudio Ronchi was selected as the 2014 winner of the Third Robert Cahn Award for a lifetime of achievements in the field of nuclear materials, a problem arose. The retired researcher's physical condition would not allow him to travel to NuMAT — the nuclear materials conference run by Elsevier that will be held in Clearwater, Florida, in October.

I immediately contacted the scientific advisor to the conference, Dr. Rudy Konings, head of the Materials Research unit at the Institute for Transuranium Elements in Karlsruhe, Germany, and we worked together to organize an award ceremony there on May 22.

Created in 2010 and named after the editor who helped Elsevier launch the Journal of Nuclear Materials, the Robert Cahn Award recognizes people with a high scientific profile in the field of nuclear materials who can also to communicate science to a broad audience and are committed to breaking down barriers between scientific disciplines. It's also an opportunity for Elsevier to reward achievement in a field that doesn't often get the attention it merits.

NuMat 2014 – The Nuclear Materials Conference, created in association with Elsevier's Journal of Nuclear Materials, serves as a forum for the presentation of high-impact research results related to nearly all aspects of nuclear materials science.

Dr. Ronchi specializes in nuclear fuel research. He has had a long and varied research career at the Institute For Transuranium Elements, Joint Research Centre of the European Commission. The institute epitomizes what Europe can achieve when all its participating countries join forces to advance fundamental knowledge. There, research on highly radioactive materials has been performed for decades with the goal of protecting European citizens against the risks inherent to these materials key to nuclear power generation but also to a number of medical treatment and imaging techniques. It is one of the most international laboratories I have ever visited, and as such it allows researchers and institutions across Europe to connect and collaborate.

Over more than 40 years in the institute, Dr. Ronchi's contribution spans pioneering experimental and modelling work. Understanding the interplay between the structure of materials and their physical properties is core to materials research. As these materials are highly radioactive, characterizing these properties and their evolution becomes hugely challenging. Much of Dr Ronchi's research had to be conducted behind almost two meters of concrete, for protection against the radiation, and using mechanical arms to handle samples not bigger than a matchstick. Dr. Ronchi was also among the first to use numerical simulation to shed light on how the products of the radioactivity or nuclear reaction, which believe it or not, include gas such as hydrogen or helium. These affect the structure of such materials, in particular via the creation of defects that can be just a few atoms displaced from their original location.

Of particular interest to Dr Ronchi was the capacity of uranium oxides – the main constituent of most nuclear fuels – to conduct heat at very elevated temperatures. We're talking about solids with melting points around 2700°C (almost 5000°F) and liquid of almost 7500° (13000°F)! Dr Ronchi has overcome numerous experimental hurdles that prevented advancing our capacity to characterize these materials, and his unique body of work has real-world implications in addition to its scientific value. Only by furthering our understanding of processes such as, for instance, how oxygen makes the fuel melt faster at very high temperatures, will we be able to better control the outcomes of an accident, which in the aftermath of Fukushima appears more crucial than ever. 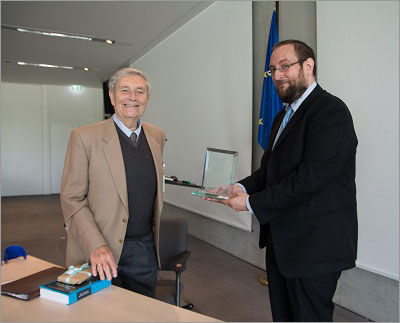 At the award ceremony, Dr. Ronchi gave a 90-minute overview of his life's work, emphasizing how important a forum the Journal of Nuclear Materials has been for this research field, its community and consequently the nuclear industry. At the end of the ceremony, when I handed him the prize, Dr Ronchi seemed deeply affected. After the event, he commented:

I should like to express again my gratitude for the award and also for the kindness you have used in organizing with Rudy an encounter with ex-colleagues and with the young generation of ITU scientists. I have been indeed deeply affected by their attentive participation and by their final, long applause.

Elsevier has been a prime partner of the nuclear materials and nuclear energy communities for a long time. The Journal of Nuclear Materials has been the main forum for this type of research. We will soon further our support by launching a new open access journal, Nuclear Materials and Energy, which will publish short communications on nuclear materials with an emphasis on fusion energy, which holds much potential for a clean and sustainable energy, as recently conveyed by Jorge Cham, creator of the geeky and widely popular PhD Comics. This is timely as the international project called ITER, which aims to design a fusion reactor, is becoming a reality in the South of France.

Along with the plaque, I gave Dr Ronchi The Coming of Materials Science, one of Robert Cahn's books, as well as a summary of Aristotle's work on the human body – a first edition from the 17th Century. History of science, and Aristotle in particular, are passions of Dr. Ronchi. He recently authored a trans-disciplinary book, The Tree of Knowledge: The Bright and the Dark Sides of Science, which takes us through the history of science to convey how science has and will influence humanity.

I wish to conclude with two statements, first, from one of his nominators for the Robert Cahn Award: "There are only few scientists in the world who have performed the kind of pioneering work on nuclear fuels that Claudio has, and especially over such a long period of time."

And second, with the words of one of the members of the Robert Cahn Award committee who, when I read out Claudio's name as one of the nominees at our meeting, proclaimed: "Yes! Ronchi! Yes, of course Ronchi!" 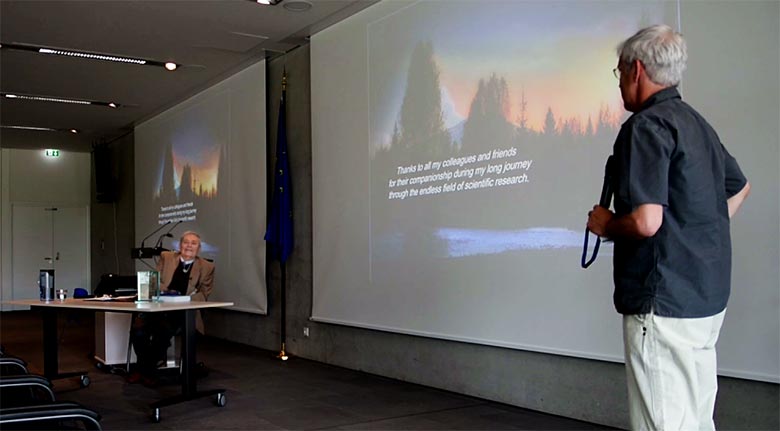 A video of Dr. Ronchi's presentation at the Robert Cahn Award ceremony is available via Materials Today.

After completing a PhD in physics at the University of Rouen in France (2006), Dr. Baptiste Gault (@bat__go) was an atom probe scientist and a nuclear materials scientist at the University of Sydney, a Marie Curie postdoctoral fellow in the Department of Materials of the University of Oxford. After a brief stint as an Assistant Professor at McMaster University (Canada) in 2012, he became a Publisher in the Materials Science group at Elsevier, based in Oxford. He has published over 60 research articles and peer-reviewed more than 50.