‘Guns do not make a nation safer,’ say doctors in new study

A new study reports that countries with lower gun ownership are safer than those with higher gun ownership, debunking the widely quoted hypothesis that guns make a nation safer. Researchers evaluated the possible associations between gun ownership rates, mental illness, and the risk of firearm-related death by studying the data for 27 developed countries.

Their findings were just published in The American Journal of Medicine.

Gun ownership in the US has been a hotly debated issue for more than 200 years. A popular notion in the US, where there are almost as many guns as people, is that “guns make a nation safer,” although there has been little evidence either way. The shootings in Aurora, Tucson, Oak Creek, at Virginia Tech, among others in recent years, have demonstrated that there may be a relationship between mental illness and easy access to guns, and that lack of treatment for mental illness may be more of a pressing problem than mere availability of guns.

Ever since the Second Amendment to the US Constitution – which states that “a well-regulated militia being necessary to the security of a free State, the right of the people to keep and bear arms shall not be infringed” – was passed in 1791, there has been a fierce debate over guns in the US. At one end is the argument that gun control laws are an infringement on the right to self-defense and on constitutional rights, and that there is no evidence that banning assault weapons would reduce crime. At the other end is the view that fewer firearms would reduce crime rates and overall lead to greater safety.

The gun ownership data were obtained from the Small Arms Survey, and the data for firearm-related deaths were obtained from a European detailed mortality database (World Health Organization), the National Center for Health Statistics, and others. The crime rate was used as an indicator of safety of the nation and was obtained from the United Nations Surveys on Crime Trends.

“The gun ownership rate was a strong and independent predictor of firearm-related death,” said Dr. Bangalore. He illustrated this point with highlights from their findings:[caption align="alignright" width="392"] 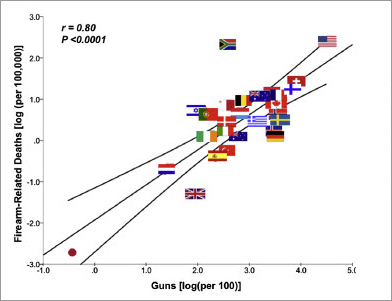 Guns per capital per country and firearm-related deaths (Source: "Gun Ownership and Firearm-related Deaths,” by Sripal Bangalore, MD, MHA, and Franz H. Messerli, MD, in The American Journal of Medicine)[/caption]

The investigators also evaluated whether mental illness, and not merely the access to guns, is the driving force for criminal activities. They used age-standardized disability-adjusted life-year rates due to major depressive disorder per 100,000 inhabitants with data obtained from the World Health Organization database as a presumed indicator for mental illness burden in each country to assess whether there was a correlation between mental illness burden of a country and the crime rate in a country, but found no significant correlation between mental illness and crime rate.

In the article, they write:

Although correlation is not the same as causation, it seems conceivable that abundant gun availability facilitates firearm-related deaths. Conversely, high crime rates may instigate widespread anxiety and fear, thereby motivating people to arm themselves and give rise to increased gun ownership, which, in turn, increases availability. The resulting vicious cycle could, bit by bit, lead to the polarized status that is now the case with the US.

They conclude that, “Regardless of exact cause and effect, the current study debunks the widely quoted hypothesis that countries with higher gun ownership are safer than those with low gun ownership.” [divider]

"Gun Ownership and Firearm-related Deaths,” by Sripal Bangalore, MD, MHA, and Franz H. Messerli, MD (DOI: 10.1016/j.amjmed.2013.04.012), is freely available as a PDF on the homepage of The American Journal of Medicine . AJM, published by Elsevier, is the official journal of the Association of Professors of Medicine. [divider]

Eileen Leahy has handled media outreach for 14 years for a portfolio of Elsevier Health Sciences journals, including theAmerican Journal of Preventive Medicine,Mayo Clinic ProceedingsandThe American Journal of Medicine. An experienced STM journal marketer, Eileen was responsible for the launches of numerous journals while on staff at Elsevier, most notably, theJournal of the American College of CardiologyandGastroenterology. She continues working as an independent consultant specializing in the development and marketing of innovative online full-text publications.

There are still more people killed with fire arms that are Non-registrated than at legal fire arms.

So the studie is not relevant for what is saver; Promote to gut down registrated fire arms, than there will be more Non-registrated guns ? Its a vage studie and I am not strusfull ont the figures

It is not possible that guns may save man's life because guns are for destruction not for safety, It always destroy the life even it is a thief while he is a man and belongs to humanity................

Ketty-The life saved would be the one doing the shooting NOT the one being shot. IF the gun was not present, it could easily be the other way around.

I would like to see the same study done on the number of knives, machetes, etc. I'm betting the more one has of these, the more people are killed w/ one of these.

The conclusion sounds obvious -- more guns; therefore, more gun-related deaths. I would also not be surprised by a conclusion that countries with more cars per capita would lead to more car accidents and more auto-related deaths. But I do not hear people calling for increasing mass transportation and/or legislating how many vehicles someone can own. What would be a more telling statistic is what the homicide rates are in each of these countries studied and how those rates compare to each other and then see which countries are &quot;safer.&quot; If they are countries with higher gun ownership, then THAT is something to talk about.

Also, it is important to keep in mind that the 2nd Amendment was put into place as a means of citizens to protect themselves from an over-reaching government; as a way to defend against military might used imappropriately against its citizens. Yes, it is horrible that there are citizens who think it is necessary to use them to intimidate fellow citizens -- there are evil people out there.

This study/article is merely a sensationalistic way to support an agenda. Tell me something new and relevant. Give me a REAL solution to the gun violence -- ways to better deal with mental illness? ways to return to a less egocentric society? economic/financial stability? alternatives to violence? promoting the values of education?

I think that you missed the other half of the author's conclusion; that is "regardless of exact cause and effect, however, the current study debunks the widely quoted hypothesis purporting to show that countries with the higher gun ownership are safer than those with low gun ownership." To that extent, I think there is insufficient evidence to support that conclusion based solely on what is in the article; I think you rightly point out that more information would be required to draw such a conclusion. However, using your quoted statistic of homicide rates, the US still suffers from some unfortunate truths; that is the ninth highest absolute homicide rate (~14,500 annually according to a 2012 UNODC study) and the highest ‘per 100,000’ rate in the developed world (~5). Something is wrong here; and I struggle to accept that the extremely high rates of gun ownership aren’t a major reason for that (~12,000 of the homicides are via firearm). I also struggle to accept that the second amendment (A well-regulated Militia, being necessary to the security of a free State, the right of the people to keep and bear Arms, shall not be infringed) somehow still applies today or can be used to justify the ownership of over 300 million firearms in the US. This amendment was ratified December 15th 1791; since then there have been many other changes and amendments (some would say corrections) to the constitution (women the right to vote – 1920) – why can’t we take a similar, pragmatic and logical view towards firearms?

Thank you, Monique, for referencing mental illness. It is often difficult for patients with a mental illness to get a job, keep a job, get reasonable healthcare, keep friends, or even have a support system or means for managing their illness. Combine that with employers who don't want to hire someone with a documented mental illness background, and you have a recipe for disaster. Who is going to seek medical assistance for a mental illness if it means losing a [potential] job? Even families who have loved ones with a mental illness don't want to tell anyone about it because of the social stigma and ramifications of revealing such information. And this is just one aspect of this discussion subject.

I was quite surprised to see that the top three countries with the highest crime rates (per 100,000 inhabitants) were Iceland (~17,000), Sweden (~13,500) and New Zealand (~10,000). Is that really the case? Is there a data error there? It would surprise me that Sweden is twice as 'dangerous' as neighbouring and relatively similar Nordic neighbour Denmark (~6,800). Is it a consequence of their small population sizes?

In any case, here is an interesting article on Iceland from BBC magazine, that gives some further insights to the safety levels in Iceland and some thoughts on what they are doing right: http://www.bbc.co.uk/news/magazine-22288564.

Flawed research and inconclusive results, but the media will grab onto in the run-up to the 2014 elections and call it "truth."