Global life expectancy increases by more than 6 years since 1990

Death rates for some causes – including drug use and liver cancer – continue to rise, per major analysis in The Lancet

However, some causes of death ran counter to these trends and have seen increased rates of death since 1990, including: liver cancer caused by hepatitis C (up by 125%), atrial fibrillation and flutter (serious disorders of heart rhythm; up by 100%), drug use disorders (up by 63%), chronic kidney disease (up by 37%), sickle cell disorders (up by 29%), diabetes (up by 9%), and pancreatic cancer (up by 7%).

Global Burden of Disease Study 2013 (GBD 2013) is freely available in The Lancet:

"Global, regional, and national age–sex specific all-cause and cause-specific mortality for 240 causes of death, 1990–2013: a systematic analysis for the Global Burden of Disease Study 2013," The Lancet (17 December 2014)

While life expectancies are increasing throughout the world, there is one notable exception: southern sub-Saharan Africa, where deaths from HIV/AIDS have erased over 5 years of life expectancy.

"The progress we are seeing against a variety of illnesses and injuries is good, even remarkable, but we can and must do even better," said lead author Dr. Christopher Murray, Professor of Global Health at the University of Washington. "The huge increase in collective action and funding given to the major infectious diseases such as diarrhoea, measles, tuberculosis, HIV/AIDS, and malaria has had a real impact.

However, this study shows that some major chronic diseases have been largely neglected but are rising in importance, particularly drug disorders, liver cirrhosis, diabetes, and chronic kidney disease."

The findings come from GBD 2013, the most comprehensive and up-to-date estimates of the number of yearly deaths due to 240 different causes in 188 countries over 23 years (1990 to 2013). The amount of data in GBD 2013 have been significantly expanded from GBD 2010 to include both more data from certain countries (China, Russia, Turkey), and additional data on conditions such as cancers and HIV/AIDS. 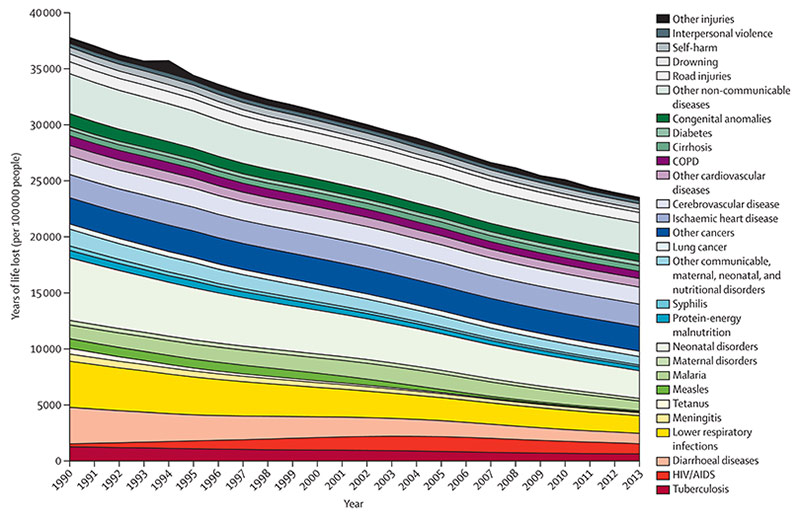 How competition can benefit research

Writing in a linked Comment, Dr. Igor Rudan and Dr. Kit Yee Chan of the Centre for Population Health Sciences and Global Health Academy at the University of Edinburgh Medical School in the UK called for continuing competition between research groups to improve science.

Estimates of the causes of the global burden of disease, disability, and death are important because they guide investment decisions that, in turn, save lives across the world.  Historically, the responsibility for those estimates rested largely with WHO and its academic partners. Although WHO's team of experts have been doing fine technical work for many years, its monopoly in this field had removed incentives to invest more time and resources in continuous improvement. The emergence of the Institute for Health Metrics and Evaluation, generously supported by the Bill & Melinda Gates Foundation, has changed the science of global health metrics in a similar way to Celera Genomics' competition with the Human Genome Project. …

The competition between WHO and the GBD has benefited the entire global health community, leading to converging estimates of the global causes of death that everyone can trust.