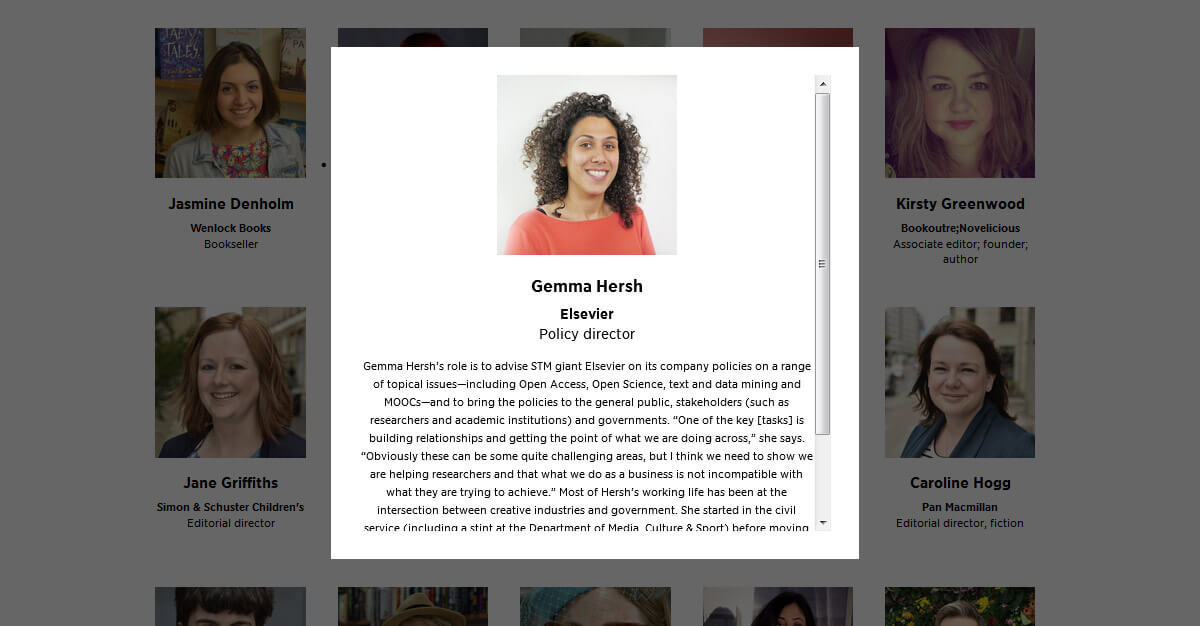 At the Frankfurt Book Fair this week, The Bookseller industry trade magazine will celebrate its list of Rising Stars in the publishing industry. Among them is Elsevier’s Policy Director, Gemma Hersh, noted for her work in developing policies for open access, open data, and text and data mining, as well as her role in communicating these policies to researchers, librarians, policymakers and the public.

Initially published in August, The Bookseller’s Rising Stars list represents “the best and brightest of the next generation of leaders” who are well equipped to handle changes in the industry and beyond.

“It was a surprise – but a nice one,” said Gemma of the phone call that notified her of the recognition. “The Bookseller often focusses on trade publishing, you don’t always see academic publishing or content and technology companies like ours featured. So it was great to see.”

As the Rising Star profile notes, much of Gemma’s working life has been spent at the intersection of arts and government, with a career that started in the civil service and included a role at Number 10 (The UK Prime Minister’s office) and the Department of Media, Culture & Sport, before working for the Association of UK Interactive Entertainment (Ukie), the trade body for the gaming industry. Those interests in the creative arts are reflected in her hobbies:

I enjoy a good book, a trip to the theatre, or watching a good boxset. And I’m a total news junkie.

From there came the Publishers Association and her role at Elsevier followed. “I always felt the most affinity with the publishing industry, out of all the creative industries I’ve had the opportunity to work in,” she said. “It’s simply the one that’s the best fit with me.”

“Telling a story you can truly believe in”

Overall, Gemma, says, what really interests her is being in an industry where there’s a story to tell.

It’s important to me to be telling a story you can truly believe in. The thing that jumps out at me right now is the scale of the business and the potential of what technology now allows. This has been a digital business for nearly 20 years, and things are changing again. It’s no longer just about moving online, but about what you can do with information once its digital. That’s a great thing to be involved with.

In crafting those stories and developing and evolving policies, Gemma collaborates with various teams within Elsevier and participates in various industry groups. “Just within the company, we’ll talk to Legal, to Journals, to Research Applications to ensure we are moving things in the right business direction,” she said. Elsevier is very big on consensus, Gemma explained, which can take time, but ultimately produces a better outcome.

It’s a process that requires a lot of drive and focus, but Gemma said she wouldn’t have it any other way: “The position Elsevier has in the industry – and the fact that we’re often the first to do new things – means we will always be held to a higher standard,” she said. “But that additional attention is the product of being the first to try new things – and it’s more interesting for me to be working in new areas than to be following someone else’s lead.”