Linguists have long studied how people recognize different accents, but a new spin on intonation studies led PhD candidate Steven Gilbers to dig into his music production expertise and develop some innovative methodologies. Now he’s calling on academia to be open to the changes needed to take the field into a more interdisciplinary future.

Steven is working towards his PhD in applied linguistics at the University of Groningen in the Netherlands. He studies the different accents and regional dialects of African American English in hip hop music, looking at how the way it’s spoken and rapped on the east coast of the United States is different from the west coast.
As a big hip hop fan, he said this research brings his two passions together:

What makes it so incredibly interesting for me is that I carry out research in the context of hip hop culture and music. A lot of my research isn't just linguistics, be that phonetics, phonology, sociolinguistics or the social aspects of language, but also how it relates to the culture and music of
hip hop. There are elements in my research that are more musicological in nature than linguistic at the intersection of those two fields.

Getting closer to the research

Studying about 6,000 kilometers away from New York City, Steven felt his next step ought to be geographical, so in 2017, he applied for a grant from the Fulbright Scholar Program. The program gives early career researchers the chance to travel to the US to continue their work, learning in a new context and culture and benefiting from new expertise. Elsevier supports the program
to promote the exchange and transfer of information and knowledge while empowering early career researchers.

Steven left the University of Groningen for six months to research how the African American English spoken and performed in music on the east coast of the USA is different to that on the west coast. He travelled to the US from September 2017 to April 2018, studying at NYU in New York for four months,
then at UCLA in Los Angeles, California, for two months.

Visiting both coasts was a vital part of Steven’s project – he wanted to know how well people could distinguish between black English speakers from the east and west coast based only on their speech, without any context. What are the signals in somebody’s speech that the listener can use to determine
whether that person is from the east coast or west coast?

What he has seen so far is that a lot of listeners seem to be focused on prosody – the intonation of speech – as opposed to focusing on the way certain vowels are pronounced, for example. This reflects the findings of a previous study he carried out for his PhD, which compared intonation in African
American English speakers from the east and west coast and how that is related to the way rappers flow.

Given how relevant the US is to Steven’s PhD project, spending time there was an obvious choice; the Fulbright Scholar Program not only supported his work with a grant but opened the door to a whole network of people, as he explained:

Getting serious about innovation

It’s not just his Fulbright credentials that earn Steven attention in the field; working with the relatively new topic of hip hop linguistics, he has been forced to pioneer new methods and start to build up a toolkit of methodologies that others can use.

Being intrinsically interested in what he’s studying shapes Steven’s approach to research. His projects usually develop from his own curiosity – he might be wondering how Tupac’s accent changed when he moved from the east to the west coast, for example. That thought would linger for a while and then
he would come up with a hypothesis and work out how to operationalize the question. At that point, he would start digging into the literature, which can take him on an unusual journey.

Because the hip hop linguistics field is so young, a lot of topics haven’t been discussed in the literature yet, so this stage can be quite difficult. I find my sources in all kinds of places, from scholarly article databases and repositories to interviews with artists and biographies of rappers. I’m
sort of figuring it out as I go.

The trick, he says, is to work out how to merge all these different sources in a way that he can translate the different terminologies, mixing and matching everything to make sense of the problem he’s dealing with.

When it’s time to start developing methodologies for the research, Steven brings in his experience as a music producer and a musician, applying the tools he used to create music to the research process. It’s an approach the hip hop community has embraced.

Rappers are big nerds at times. Hip hop artists are often really eager to discuss what makes their music so amazing, to talk about the intricacies of the craft, of writing the lyrics, of recording something. There was this great interview with Eminem where he shows Anderson Cooper how to bend words to get them to rhyme with “orange.” What he’s discussing in that interview is very useful for a linguist studying rap – I can translate it and apply it to what I’m studying.

Take his study on how intonation – rhythms and melodies – in speech varies between US regions. He found that the flows and speech of east coast rappers are more monotone and rhythmically strict, compared to the more diverse pitch and rhythms of west coast rappers. But he needed numbers to run statistical
analyses for the research; how could he quantify this? There were no existing methodologies he could use, so he had to dig into his music expertise and use a tool that’s been around since the 1980s.

MIDI is the protocol that allows electronic instruments to communicate with a computer – you send binary code and you end up with notes and timing. I figured out if I recreate those rhythms of the rappers in MIDI, then I can export that binary code and analyze the timing information. All of a sudden,
I had this very robust measure of rhythmical timing in rap. You wouldn't come up with that if you didn't have experience with making music.

Connecting with the community to promote innovation 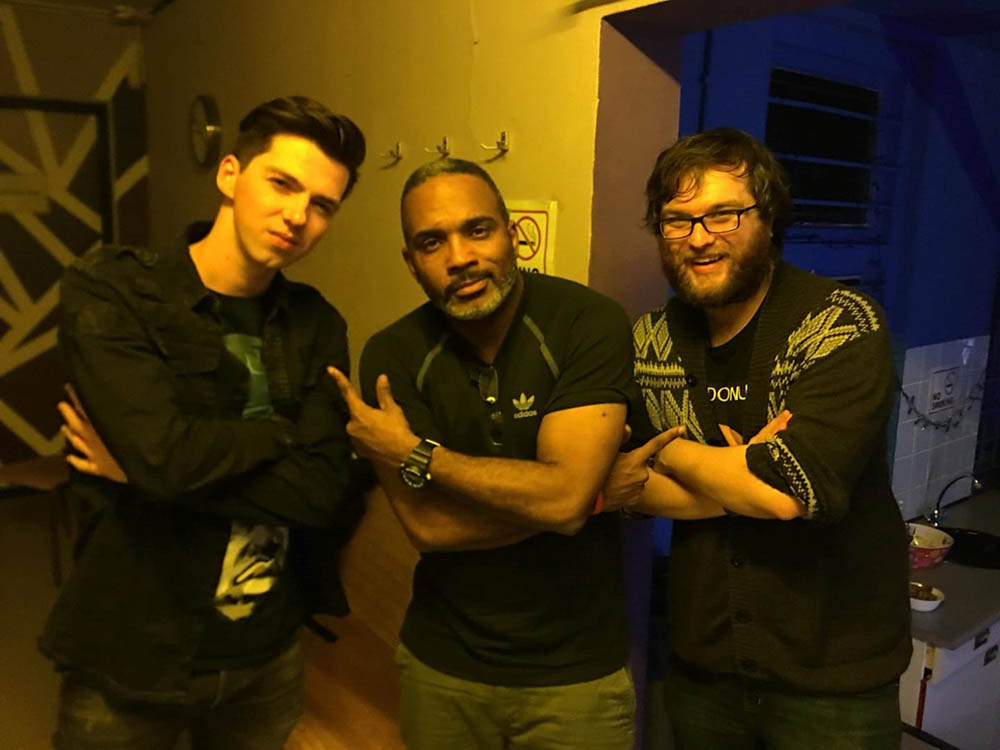 He’s not alone; according to Steven, most of his peers run into the same issues. So armed with his newly-created methods, he has a responsibility to share them with other researchers, which he does by publishing and attending conferences. In the summer of 2018, he presented the intonation analysis methodology at a conference in Auckland, New Zealand, and a couple of months later he received a message on Twitter from someone who was trying to replicate his study for Singapore rappers. She had been at his talk.

Presenting his work at conferences has also supported Steven’s efforts to communicate about his research with the public: he met Zach Diaz, who is working on a PhD on hip hop musicology at the University of Bristol, at a conference in Cambridge, and they now co-host the podcast Kick Knowledge. Recording through Skype, they interview people all over the world, including a couple of artists they love, like Large Professor, the producer of Nas’s first record, Illmatic, which is Steven’s favorite album.

When we interview artists, sometimes we talk a little bit about our own research and ask their opinions on it. That's another way of sharing the research with the artists and with fans of hip hop music. What I've found is that a lot of people are really surprised and very interested because they wouldn't have imagined that there are universities funding this type of research. That makes it a lot of fun.

Progress is inevitable, he says, but he’s concerned that the pace won’t be fast enough. The traditional approach to publishing new methods, for example, can hold up the process – it can take months to get a paper through peer review and published in a journal, by which time someone else might have needed the method.

This resistance to change, as he sees it, isn’t peculiar to academia – it happens in music and society more broadly. People may say that they’re looking for innovation, new methodologies, new approaches and interdisciplinary work, but when it comes down to it, they can be hesitant to accept the change that’s needed. Steven says it’s important to practice what you preach:

There's no reason for research to be an ivory tower thing. There's great value in the existing structure of journals and articles, but there's also a wealth of information outside of that, and there are so many tools we can use. It makes the research more fun, more interesting.

Innovation is so important for research, so when people try to innovate methods, give them a chance. I think research would go twice as fast if people were more open to innovation in a real way.

Rappers provide interesting research matter – for example, Eminem is known for ‘bending’ words to rhyme them. From his Infinite album:

My thesis will smash a stereo to pieces
My a capella releases classic masterpieces through telekinesis
It eases you mentally, gently, sentimentally, instrumentally
With entity, dementedly meant to be infinite

Steven Gilbers co-hosts the Kick Knowledge podcast, about hip hop research, to make it more accessible to a wider audience. His co-host is Zach Diaz, a PhD candidate at the university of Bristol, studying hip hop musicology.

Steven Gilbers (@Steven_Gilbers) is an applied linguistics PhD candidate at the University of Groningen. He is also a Fulbright scholar (NYU and UCLA) and a lecturer on an undergraduate course on English phonology and phonetics. Alongside his academic work, he is a rapper, composer and producer of hip hop music influenced by a wide array of genres. He is also a spoken word artist on themes ranging from the financial crisis to police brutality and has performed at SPOKEN XL at Paradiso in Amsterdam.

After a few accidents, Lucy Goodchild van Hilten discovered that she’s a much better writer than a scientist. Following an MSc in the History of Science, Medicine and Technology at Imperial College London, she became Assistant Editor of Microbiology Today. A stint in the press office at Imperial saw her stories on the front pages, and she moved to Amsterdam to work at Elsevier as Senior Marketing Communications Manager for Life Sciences. She’s now a freelance writer at TellLucy. Tweet her @LucyGoodchild.