Mice given a drug commonly used in patients to fight systemic fungal infections more often succumb to what would otherwise be a mild case of the flu. The evidence reported today in Cell Reports, published by Elsevier's Cell Press, shows that the drug called Amphotericin B, which has an estimated $330 million in sales around the world each year, can render a protein important for antiviral defense ineffective in both cells and mice.

The findings suggest that patients receiving the antifungal therapy may be functionally immunocompromised and more vulnerable to influenza and other viral infections, the researchers said. 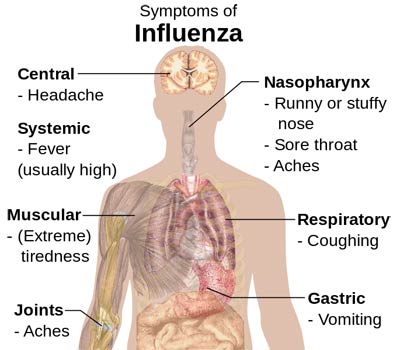 "Given these results in cells and mice, it may be worthwhile to consider that patients receiving, or who may receive, Amphotericin B-based therapies be appropriately vaccinated against influenza virus. Also, clinical consideration may be given to close monitoring of patients receiving Amphotericin B-based therapies for any symptoms suggestive of flu so that they might be considered for the early administration of an antiflu therapy."

The researchers showed that Amphotericin-B prevents the antiviral protein in cells known as IFITM3 from fending off influenza A virus.

"When we treated lung cancer cells with the antifungal drug, we saw the antiviral protection from IFITM3 pretty much disappear," explained Dr. Christopher Chin, co-first author, also from UMMS.

When researchers in Paul Kellam's group at the Wellcome Trust Sanger Institute exposed mice treated with Amphotericin-B to influenza A virus, the animals became very ill and lost more than 25 percent of their body weight. Those symptoms looked very similar to those in animals completely lacking the protective IFITM3 protein. Mice that had not been treated with Amphotericin-B experienced only a moderate illness and recovered fully, as expected. In effect, treatment with Amphotericin-B converted a mild illness for the mice into a life-threatening one.

[pullquote align="right"]Sometimes a very useful drug can have unforeseen effects, and the more we can learn about such things, the better care we can provide. — Abraham Brass, MD, PhD[/pullquote]

"Sometimes a very useful drug can have unforeseen effects, and the more we can learn about such things, the better care we can provide," Dr. Brass said.

The new study should prompt further clinical research. For instance, he added, studies could be designed to monitor both the number and the severity of flu infections in patients receiving Amphotericin B-based therapies.