Fracking isn’t just splitting rock – it’s splitting opinion. One of the concerns raised by the public has been about the millions of gallons of fracking fluid required during the process, and its potential to contaminate groundwater and drinking water sources.

Two new studies, published in Trends in Environmental Analytical Chemistry and Science of the Total Environment, identify the major organic compounds companies are adding to fracking fluid. The science is still slightly behind the public’s lead, say the researchers, but the new findings will help the authorities test groundwater and drinking water for contamination, and in the future, set levels for regulation.

Fracking: the process and the problem

Hydraulic fracturing, or fracking, is a process used to release oil and natural gas from underground shale rock. It works by injecting fracking fluid – water with chemicals added – at high pressure into wells to create cracks in the rock. When the pressure is released, hydrocarbons seep out and can be recovered. An effective method for extracting oil and gas from the ground, fracking has proven popular with energy companies, and advocates who say it will bolster the economy and support energy independence. Resistance from much of the general public, however, has led many local and national governments to reconsider whether to allow it.

One of the concerns is water contamination. Fracking fluid comes back out the surface water, and there is a risk it can contaminate the surface water and ultimately groundwater if it is not properly disposed. Fracking companies add chemicals to fracking fluid – compounds like biocides, which are potentially harmful if they leak into the groundwater. The new study discusses these organic constituents, providing a way to detect potential contamination in the water system. 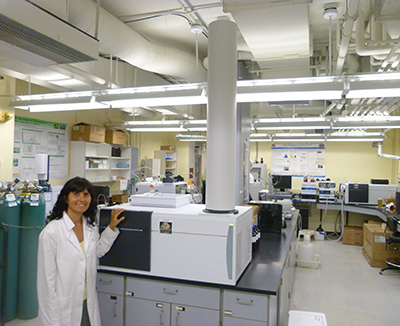 Lead author Dr. Imma Ferrer, Chief Analyst for the Center for Environmental Mass Spectrometry at the University of Colorado Boulder, explained the situation:

A few years ago, we started thinking that this could be a significant environmental water problem. In some cases, the fluid has leaked from pipes and into groundwater. Before we can assess the environmental impact of the fluid, we have to know what to look for. If we find out what’s in it, we  can check if the groundwater is contaminated and also treat the flowback water to make it safe.

Public awareness is ahead of the science, researchers say

It’s common for scientific research and advances to happen before the public is aware of the details, and sometimes even about the problem that led to the research. This case is different – according to the researchers, the public has been aware of the potential risk of fracking fluid contaminating the water supply for several years, and now the science is catching up.

“I think the involvement of big oil and gas companies, and the potential environmental impacts of the process, have put fracking in the public eye,” explained Dr. Ferrer. “People have been aware of it for five years or more, and now that it’s becoming increasingly common – and controversial – more research is going into different aspects of fracking.”

Dr. Ferrer believes this increasing focus on potential water contamination from fluid will lead to more attention and regulation in the future. “Companies will need to start specifying exactly what they’re adding to the fracking fluids they use,” she said. “Now that we know what to look for, we will be able to test surrounding groundwater and drinking water for contamination.”

Previous studies have examined fracking fluid for content, including salt and radioactive elements that come from the rock formations. This new research focuses on organic compounds – the bigger molecules that companies add the fluid. The researchers used two main combined techniques to identify these organic compounds: liquid chromatography and mass spectrometry.

The results reveal about 25 percent of the organic compounds the researchers believe to be present in fracking fluid. This includes surfactants – molecules that are commonly found in soaps – and biocides – potentially harmful compounds that kill microbes in the fluid and the well casing.

[pullquote align="right"]“We’ve identified the compounds that are necessary to test for contamination in groundwater and drinking water." — Lead author Imma Ferrar, [/pullquote]

“We haven’t found everything, but we think these are the most important organic compounds,” Dr. Ferrer said. “We’ve identified the compounds that are necessary to test for contamination in groundwater and drinking water.

“It’s really exciting because I realized there had been a lot of research done on inorganic compounds, but the organic ones had been left a little bit aside. We now have sophisticated analytical techniques we can use to investigate this relatively new area, and this is really our chance to use these tools to identify as many compounds as we can.”

Elsevier has made these articles freely available for 90 days, until July 7, 2015:

After a few accidents, Lucy Goodchild van Hilten discovered that she’s a much better writer than a scientist. Following an MSc in the History  of Science, Medicine and Technology at Imperial College London, she became Assistant Editor of Microbiology Today. A stint in the press office at Imperial saw her stories on the front pages, and she moved to Amsterdam to work at Elsevier as Senior Marketing  Communications Manager for Life Sciences.