Researchers have shown for the first time in an animal that is more closely related to humans that it is possible to make new bone from stem-cell-like induced pluripotent stem cells (iPSCs) made from an individual animal's own skin cells.

The study in monkeys reported today in the journal Cell Reports, published by Elsevier's Cell Press, also shows that there is some risk that those iPSCs could seed tumors, but that unfortunate outcome appears to be less likely than studies in immune-compromised mice would suggest. 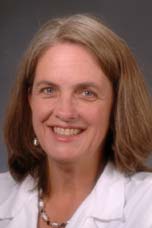 Dr. Cynthia Dunbar, head of the Laboratory of Molecular Hematopoiesis in the Hematology Branch at the National Heart, Lung, and Blood Institute, explains:

We have been able to design an animal model for testing of pluripotent stem cell therapies using the rhesus macaque, a small monkey that is readily available and has been validated as being closely related physiologically to humans. We have used this model to demonstrate that tumor formation of a type called a 'teratoma' from undifferentiated autologous iPSCs does occur; however, tumor formation is very slow and requires large numbers of iPSCs given under very hospitable conditions.

We have also shown that new bone can be produced from autologous iPSCs, as a model for their possible clinical application.

Autologous refers to the fact that the iPSCs capable of producing any tissue type — in this case bone — were derived from the very individual that later received them. That means that use of these cells in tissue repair would not require long-term or possibly toxic immune suppression drugs to prevent rejection.

The researchers first used a standard recipe to reprogram skin cells taken from rhesus macaques. They then coaxed those cells to form first pluripotent stem cells and then cells that have the potential to act more specifically as bone progenitors. Those progenitor cells were then seeded onto ceramic scaffolds that are already in use by reconstructive surgeons attempting to fill in or rebuild bone. And, it worked; the monkeys grew new bone.

Importantly, the researchers report that no teratoma structures developed in monkeys that had received the bone "stem cells." In other experiments, undifferentiated iPSCs did form teratomas in a dose-dependent manner.

The researchers say that therapies based on this approach could be particularly beneficial for people with large congenital bone defects or other traumatic injuries. Although bone replacement is an unlikely "first in human" use for stem cell therapies given that the condition it treats is not life threatening, the findings in a primate are an essential step on the path toward regenerative clinical medicine.

"A large animal preclinical model for the development of pluripotent or other high-risk/high-reward generative cell therapies is absolutely required to address issues of tissue integration or homing, risk of tumor formation, and immunogenicity," Dunbar said. "The testing of human-derived cells in vitro or in profoundly immunodeficient mice simply cannot model these crucial preclinical safety and efficiency issues."

The NIH team is now working with collaborators on differentiation of the macaque iPSCs into liver, heart, and white blood cells for eventual clinical trials in hepatitis C, heart failure, and chronic granulomatous disease, respectively.[divider]

Cell Reports is an open access journal, and the article is freely available on Cell Press website: 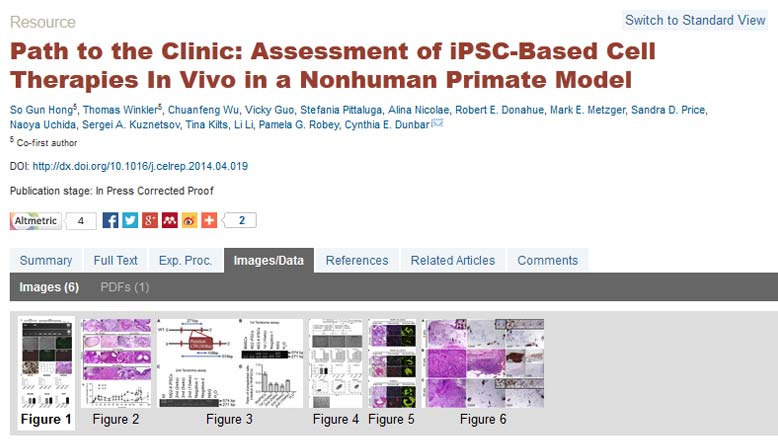 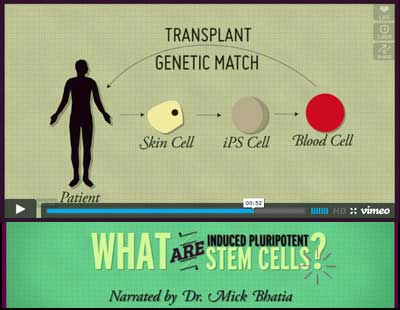 Their project was created with funding from the Stem Cell Network. This one — "What are induced pluripotent stem cells?" — is narrated by Dr. Mick Bhatia, Director and Senior Scientist at the McMaster Cancer and Stem Cell Biology Research Institute in Hamilton, Ontario, and Canada Research Chair in Human Stem Cell Biology.