Fasting may protect against immune-related effects of chemotherapy and aging

Study suggests that fasting may benefit cancer patients, the elderly and people with immune defects

While chemotherapy can save lives, it can also cause many side effects, including the depletion of immune cells. Also, even in the absence of chemotherapy, normal aging takes a heavy toll on the immune system, leading to immune deficiencies and a higher risk of developing leukemia and a variety of malignancies with age. 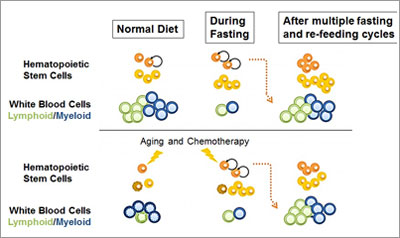 Now researchers reporting today in the journal Cell Stem Cell, published by Elsevier's Cell Press, have found that a simple dietary intervention — periodic fasting — may combat both chemotherapy-induced and aging-related changes in immune cell function by replenishing stem cells in the blood. The findings suggest that fasting may provide benefits for cancer patients, the elderly, and people with various immune defects.

It's estimated that more than one-fifth of cancer-related deaths are hastened, or even caused, by toxic effects of chemotherapy rather than the cancer itself. These toxicities can reduce the overall effectiveness of anticancer treatments by limiting the dosage and frequency of chemotherapeutic interventions that are tolerable to patients. Currently there are no interventions to lessen the side effects that chemotherapy has on the immune system or to prevent the immune cell dysfunction that occurs with aging.

Previous work by Dr. Valter Longo, Professor of Gerontology/Alzheimer's Research/Cancer Research, Biological Sciences at the University of Southern California, and his colleagues revealed that temporary nutrient restriction could increase stem cells' resistance to certain stressors. In their latest work, they tested whether fasting could have protective effects for immune cells such as white blood cells. Dr. Longo explains:

We show that prolonged fasting periods cause a major reduction in white blood cell number followed by its replenishment after refeeding. We discovered that this effect, which may have evolved to reduce energy expenditure during periods of starvation, is able to switch stem cells to a mode able to not only regenerate immune cells and reverse the immunosuppression caused by chemotherapy, but also rejuvenate the immune system of old mice.

The researchers found that protection against white blood cell loss also occurred in human patients who fasted for a single 72-hour period prior to platinum-based chemotherapy as part of a phase 1 clinical trial.

With additional experiments, the investigators discovered that fasting provides its protective effects by reducing levels of insulin-like growth factor-1 (IGF-1), a protein with key roles in growth and aging. Therefore, fasting or treatments that target the IGF-1 pathway might provide similar benefits for cancer patients, the elderly, and people with immune defects. "We and others are currently testing the effect of fasting-mimicking diets on the protection of patients against chemotherapy's side effects, and we're also testing the role of multiple cycles of a fasting-mimicking diet on the immune system in generally healthy middle-aged and elderly subjects," said Dr. Longo.