European Commission to announce winners of €1B research awards

Update: The winners have been announced. Read about them here. [divider] On Monday, the long selection process for one of the more ambitious research funding projects of the digital age will reach its apotheosis when the winners of the Future and Emerging Technologies (FET) Flagships initiative are announced. Neelie Kroes, VP of the European Commission and High Commissioner for the digital agenda for Europe, will announce the winners at a press conference in Brussels.

From a shortlist of six multinational research consortia, two have been chosen by a panel of experts, including leading scientists, professors, Nobel Prize winners and industrialists. These two winners will benefit from up to €1 billion of EU funding each. 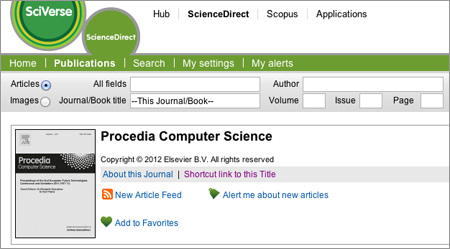 The six FET flagships pilots competing for this coveted prize formally presented themselves earlier at the 2nd European Future Technologies Conference and Exhibition, where they were introduced by Kroes.

Elsevier collaborated with the European Commission to publish the scientific proceedings of this meeting in Procedia Computer Science. Both the video and scientific papers are freely available on Elsevier’s Science Direct, enabling researchers and the public to explore the scientific vision of each of the proposals in detail.

Here are the contenders in no particular order:

For more information about the FET Flagships and related initiatives, visit the website of the European Community Research and Development Information Service (CORDIS) and  the Europe's science and technology initiative for 2020.

On Monday, you can watch the press conference where the winners will be announced officially, streamed live by EbS, and find a report here on Elsevier Connect. [note color="#f1f9fc" position="center" width=800 margin=10]

Here are the websites of the contenders' projects:

Here are some related links:

As a Senior Publisher for Elsevier Computer Science, Sweitze Roffel focuses on on artificial and computational intelligence and theory. He holds and engineering degree in chemistry from the University of Groningen. He joined Elsevier in 2004 and is based in Amsterdam.