A particle physicist, a disruptive technologies expert and a publishing veteran write about the challenges and opportunities for women in science

For Women’s History Month, Elsevier is presenting the research and perspectives on women in various aspects of science. Here, three women in distinct roles at Elsevier — Eleonora Presani, Anita de Waard and Anne Kitson — write about the challenges and opportunities for women in science today.

Before Dr. Eleonora Presani (@HEPPublisher) joined Elsevier in 2012, she was a particle physicist at CERN, on a research team that worked on a device to detect anti-matter in space that was placed aboard the International Space Station. Faced with the uncertainty of research-funding in a highly competitive field, the native of Trieste, Italy, decided to pursue a related interest: science communications. As a publisher, she is responsible for 14 academic journals in Nuclear and High Energy Physics, including Physics Letters B, Nuclear Physics A, Nuclear Physics B, Nuclear Instruments and Methods and Physics of the Dark Universe. Her role is to organize and improve the editorial processes, appoint editors and attend international conferences.

Research science is a tough field for women and men. It's competitive, many have to work day and night, and it involves much travel and life disruption. That makes it hard for anyone to balance work and life. And research science is so fast-moving and dynamic that taking time off for family can set one back irretrievably. While it’s possible to find a compromise and succeed in science and still have a family, it is not always easy.

At the same time, there are many great scientists – women and men – who pursued their dreams and work hard in science outside of the academic track and are very happy with their choice. I am. So those seeking an optimal work-life balance might consider scientific fields outside academia — including applied research such as corporate research and development, serving as analysts and consultants, or working in publishing — which tend to offer more flexibility than universities or other pure research positions.

On a separate note, because there are fewer women in science, it’s easier for women to stand out, which has advantages – particularly being noticed and remembered. And I would encourage women to take any opportunity to be noticed by standing up and speaking out in any setting. Be confident. Or if, as a young scientist, you don’t feel confident – pretend you are!

All that said, to address the gender gap in science, I would suggest having more women on conference panels or hiring and promotion committees. In addition, men and women in these positions – or those planning conference speakers and panelists – could ensure woman candidates are considered. No question, many men are happy to consider women, but sometimes it takes a deliberate effort to effect change.

Anita de Waard (@anitawaard) is VP of Research Data Collaborations at Elsevier. With a background in experimental physics, she joined Elsevier as publisher in physics and neurology in 1988, taking on the role of Principal Researcher for Disruptive Technologies in the Labs group in 1997 – a role she held until this year. Her main focus is the development of innovative product concepts, with a focus on establishing collaborations between Elsevier and academic groups in information and computer science. In 2003, Anita founded and ran the Reed Elsevier Data Standards Group. Her interests include the application of Semantic Web technologies for scientific communication, and the development of a new, semantic form for the scientific article. She is a PhD candidate in linguistics at the University of Utrecht.

Men, in my experience, have tended to support rather than hinder me. Perhaps it’s a form of rooting for the underdog. But it’s not paternalistic – I sense that men like having women around.

In a field dominated by men, women can stand out, which has advantages – people remember you, which opens doors. Certainly the minority in any room can feel a bit intimidated to stand up and speak up, which can deter many women from doing so. Hence, they get ignored, or don’t seem dynamic. Women in science should speak up in any and every setting – it'll give other women in the room more confidence to do the same.

Regarding potential causes of the gender gap, I’ve found that while many grade-school girls like and excel in math and science, upon hitting puberty, girls – and boys as well – can revert to gender stereotypes. It’s biological. So some girls may back away from math and science then, while boys move ahead. Having role models is important and could be focused most effectively on girls at the “age of choice” – 13,14,15 – when kids are beginning to self-select who they are. Also, exposing teen women to young, vibrant “cool” women scientists can inspire them.

Young women should view the gender gap in science as an exceptional opportunity, not a barrier. If there's a shortage of women, and men tend to root for them, then the field is richly fallow for a career path.

Anne Kitson is Executive VP of Health and Medical Sciences for Elsevier. With a background in biochemistry and neuroscience, she joined Elsevier in 1997 after working for Oxford University Press and Blackwell Publishing. Before taking on her current role, she was Senior VP for Life Sciences journals and previously Publishing Director for Materials Science and Engineering. She has a master’s degree from Oxford University and lives in Oxford. 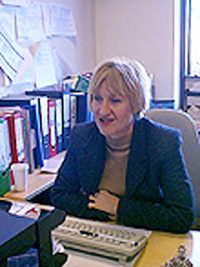 Clearly there are too few women in science, especially past PhD and into post-doc level positions, but fortunately – I hope – we’re moving beyond “that's the way it is” to unacceptable. While discrimination is frowned upon, and I’ve faced no barriers myself, a glass ceiling does sometimes remain at senior positions. Women in science are in transition, and in my view, Europe and China seem to be ahead of the curve.

In the UK, for example, which is facing a shortage of engineers — some 30 percent to 40 percent of senior engineers are set to retire this decade — the country is desperate to attract new talent and is encouraging more women to pursue engineering. The general trend in Europe seems to show that women and men in STEM fields usually earn the same pay in equivalent positions, but this still needs to be monitored.

As for the issue with work-life balance, we’re seeing much more support in research science for people with children; parents sometimes take their young infants to conferences now.

As the barriers come down, we’ll have a true meritocracy.