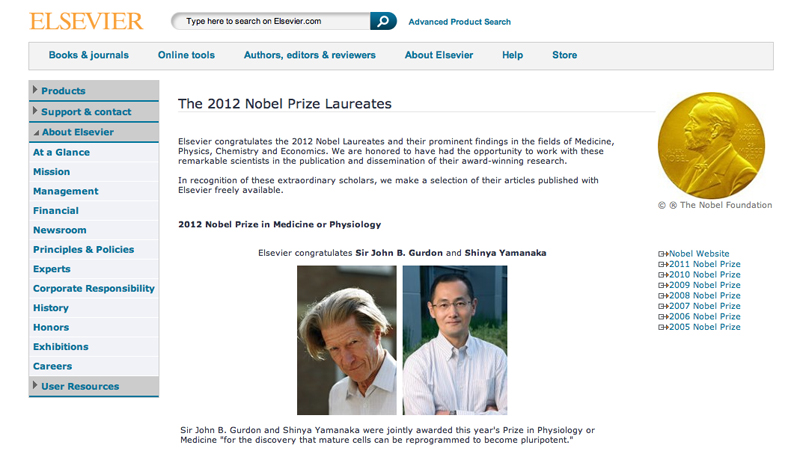 This year's Nobel laureates were honored for research that covered such diverse subjects as how ordinary cells can be reprogrammed into stem cells, providing hope for disease treatments, to matching theory, a concept in economics that looks at how people and businesses find each other in pursuits such as marriage to job hunting.

All eight Nobel scientists have connections with Elsevier, publishing journal articles and book chapters  and serving as journal editors or members of editorial boards. Previous laureates with Elsevier connections included Alexander Fleming for his discovery of penicillin and Linus Pauling, who was honored with the chemistry and peace prizes.

Today, Elsevier launched a Nobel tribute website to honor their achievements and provide free access to some of the research they published with Elsevier. They will be honored at the Nobel Prize Award Ceremonies December 10 in Stockholm.[divider]

Dr. John Gurdon and Dr. Shinya Yamanaka share the award in physiology or medicine for discovering that mature, specialized cells can be reprogrammed into immature cells capable of developing into all tissues of the body. Their key individual research findings into so-called stem cells were separated by 50 years.

Gurdon and Yamanaka's work set the stage for the promising but the still-distant hope of producing cures and treatments for a variety of ailments by growing new tissue that originated from the patient's own body.

In 1962 Gurdon was the first to clone an animal from non-embryonic tissue, in this case a frog.  He removed the nucleus of an intestinal cell from an adult frog and inserted it into a frog egg cell, whose own nucleus had been removed. Once in the egg, the DNA from the mature intestinal cell no longer produced more intestinal cells like itself, but instead operated as a developing egg.

How this could happen remained a mystery until 2006. That's when Yamanaka showed that four proteins known as transcription factors were capable of turning a mature cell into a stem cell. The research led to the possibility that stem-cell research could proceed without destroying human embryos.

Yamanaka's crucial 2006 study was published in Elsevier's journal Cell, as were a series of his follow-up reports. Gurdon, of the University of Cambridge in England, has published in Cell, Current Biology, Development Biology and Mechanisms of Development. Yamanaka, a professor at Kyota University in Japan, is an editorial board member of Cell and also has published extensively in Elsevier journals, including Cell, Current Biology, Genomics and Neuroscience Letters. Dr. Yamanaka also contributed to the Handbook of Stem Cells.[divider]

David J. Wineland, PhDSerge Haroche and David Wineland share the physics award for devising ways to study the strange world of quantum physics, a realm in which reality often defies logic, as in the ability of one particle to be in two places at the same time, or for it to behave as a particle sometimes and as a wave at other times. It is a world so fragile that mere observation can destroy the quantum particles under study.

Their research has allowed for the creation of spectacularly accurate clocks and holds the promise for a new generation of supercomputers based on quantum physics. Some predict those computers could bring change as revolutionary as those wrought by the classical computer over the last fifty years.
Working separately, each scientist came up with a different method for probing the quantum world. Haroche used photons, or light particles, while Wineland trapped ions and then cooled them using lasers.

Haroche, a professor at the College de France, and the Ecole Normale Superieure, has published in Optics Communications and the Journal of Luminescence. Wineland, physicist at the National Institute of Standards and Technology and the University of Colorado, has published in Chaos, Solitons & Fractals, and Physics Letters A.[divider]

Robert Lefkowitz and Brian Kobilka were awarded the Nobel in chemistry for research that looked at how the body communicates with itself, specifically how chemical messengers floating in the bloodstream are able to trigger tissues and organs to respond.

Their research confirmed the existence of receptors on the cell membrane, which can detect the presence of a chemical messenger and then trigger cells to respond.

This discovery launched a wave of new prescription medications that specifically target these receptors, known as G-protein-coupled receptors (GPCRs). The medications include beta blockers for blood pressure, anti-allergy medications and acid-reflux drugs.

In an interview in The New York Times, Lefkowitz cited the example of adrenaline — the chemical messenger that triggers the body's fight-or-flight response — and how it gets the body's cells to act: "If you have something like adrenaline, it sticks in there, turns the key, changes the shape of the receptor, and now the receptor having  changed shape, is able to tickle the G protein."

Lefkowitz, who is professor at Duke University Medical Center, in Durham, North Carolina, and the Howard Hughes Medical Institute, is an Advisory Board Member for the journal Life Science. He has published extensively in Elsevier journals including Biochemical and Biophysical Research Communications, Life Sciences, Biochemical Pharmacology, Trends in Pharmacological Sciences,  Biochimica et Biophysica Acta (BBA), Journal of Molecular and Cellular Cardiology, and Cell.

Lloyd S. Shapley, PhD[/caption]Alvin Roth and Lloyd Shapley share the economics prize for their work in matching theory and how it affects various markets, including job hunting, and efficient systems for matching students with colleges and organ donors with those in need.

While most economics uses price as a means for allocating resources, the researchers work focused on markets where no prices existed.

Starting in the early 1960s, Shapley used cooperative game theory to derive methods which guaranteed stable matching, focusing on marriage and how partners find each other.

Roth built on Shapley's theoretical results so that it could be practically applied. He developed models that would more fairly help determine which colleges and medical schools that students would attend, and for matching appropriate kidneys with the right patients.

Shapley, a professor emeritus at University of California, Los Angeles, has been published in Games and Economic Behavior , the Journal of Economic Theory and the Journal of Mathematical Economics.[divider]

Len Maniace is an Executive Editor for Global Internal Communications at Elsevier. He worked 32 years as a journalist, mostly with Gannett in New York (The Journal News), reporting on science, medical, environmental, health-policy and government news, as well as serving as assistant city editor. He later covered breaking news in New York City for theNew York Post. Outside of work, he leads an environmental sustainability program for a volunteer, nonprofit group in his New York City neighborhood of Jackson Heights, Queens. He is married and has two sons.