Ron Mobed talked about the government’s role in balancing applied and basic research, and the publisher’s role in ensuring reproducibility of results

The role of scientific research and its impact on America’s health system is one of the most hotly debated topics in the United States among all social sectors. While medical advances in the 21st century have been extraordinary, and new discoveries and treatments are heralded almost daily, there are still many challenges. How do we balance the need to invest in exploration, which can be extremely costly, against a return on investment? Should more of an effort be made to finding cures for rare diseases? If so, where will the money come from? Is there still a case to be made for supporting basic research in an age of government cutbacks, or should taxpayer money be used soley for practical solutions?  How can technology help to cut costs and improve patient care?

These were among the compelling topics debated at the Research!America’s 2015 National Health Research Forum, September 10, where more than 300 thought leaders in research, policy and government affairs gathered to discuss the rapidly evolving landscape of modern medical research. Among them was Elsevier CEO Ron Mobed, who one of five experts on a panel moderated by NPR science correspondent Richard Harris about the evolving role of science research and its impact on the nation’s health system. Mobed was joined by Gary Gibbons, Director of the National Heart, Lung and Blood Institute; Anil Jina, VP of Shire HGT; Sudip Parikh, VP and General Manager of Health & Analytics at Battelle; and Vincent Forlenza, CEO and President of BD, a global medical technology company.

The panelists discussed the changing relationship between researchers, industry leaders and policymakers, and their individual roles in the development of new treatments and technologies. 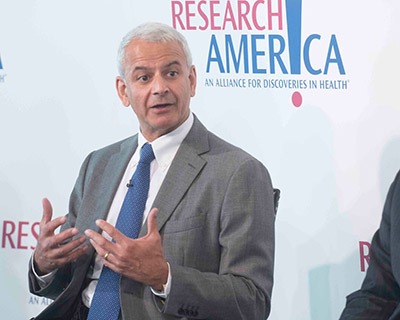 Mobed specifically discussed the government’s role in finding the right balance between funding applied medical research, which can lead to foreseeable benefits, and giving researchers the creative freedom for basic research, which can ultimately lead to groundbreaking discoveries. “There are some times when governments need to provide a framework from which, industry, commerce and other organizations can work,” he said. “In the absence of frameworks, it’s difficult to coordinate research and get results.”

Fundamental to the success of any scientific research endeavor is the issue of reproducibility – in particular, the role of scientific journals in verifying the accuracy and viability of data and providing a clear understanding of the methodologies used so they can be used for further research. As Mobed explained, Elsevier’s new journal Methods X was developed as a resource for researchers to provide an outlet for technical information that can be useful for others working in the same field as well as showcasing the technical aspects of research. Many researchers spend a significant amount of time on customizing research methods to their specific needs or setting without getting appropriate credit for this part of their work. MethodsX publishes this information in order to make it peer reviewed, searchable, citable and reproducible. “To make access to the underlying data easier for the reader,” Mobed explained, “we’ve now connected papers to 200 separate data depositories.”

Panelists also talked about the challenges and opportunities of public-private partnerships in health research and the need for further collaboration among researchers.

As often happens in open discussion, more questions were raised than answered, but the importance and timing of the event was clear as it coincided with the Senate work on the 21st Century Cures Act. Already passed by the House in July, this bill would streamline the process for medical drug and device approvals. The Food and Drug Administration’s Acting Commissioner Stephen Ostroff told forum attendees the FDA was “very comfortable with the content” of the bill during his panel discussion on the future of regulatory science.

Watch videos of the event

As VP and Head of Global Corporate Relations at Elsevier, Tom Reller (@TomReller) leads a global team of  media, social and web communicators for the world's largest provider of scientific, technical and medical (STM) information products and services. Together, they work to build on Elsevier's reputation by promoting the company's numerous contributions to the health and science communities, many of which  are brought to life in this online community and information resource: Elsevier Connect.