Electronic nose can sniff out bacteria in drinking water 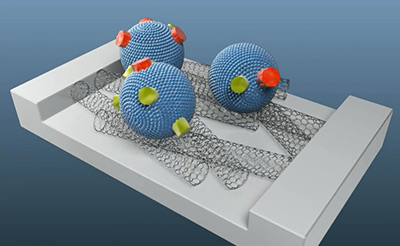 Humans can detect more than one trillion different smells, according to a study by researchers at The Rockefeller University. With such power to distinguish smells, the human nose can identify the scent of a beautiful flower, detect whether food is past its best or spot danger before it appears.

So what if we could recreate that power in a device? That’s exactly what researchers at Seoul National University have done – and the result has potential applications in healthcare, wine production and airport security.

A team of researchers led by Dr. Tai Hyun Park, a professor in the School of Chemical and Biological Engineering at Seoul National University in Korea, has developed a bioelectronic nose that mimics the human nose. The device can detect traces of bacteria in water by smelling it, without the need for complex equipment and testing.

According to their study published in Biosensors and Bioelectronics, the technology works by using the smell receptors in the human nose. The sensor is simple to use and it can detect tiny amounts of contamination in water, making it more sensitive than existing detection methods. The authors of the study say this could make the technology even more useful in the field.

There are two main problems caused by bacteria and other microbes in water: they can make the water toxic and make it smell bad. At high concentrations, bacteria can be toxic in drinking water. But at lower levels – virtually undetectable by current culturing techniques – they can cause an “off flavor,” putting people off from drinking it.

The new sensor can sniff out low levels of bacteria and other microbes by detecting the off flavor they give off.

“Water that smells bad isn’t necessarily toxic,” said Dr. Park. “Imagine you don’t do your laundry; it’s not that toxic but you don’t want to wear it because the smell is bad. With drinking water, if there’s off flavor; even if the water isn’t toxic, you don’t want to drink it. We wanted to develop a way to detect and remove this kind of contamination so people are happy to drink water.”

Traditionally, water was tested for contamination with bacteria by taking a sample and trying to grow the bacteria in the lab. When the bacteria grow, scientists can count the number of colonies and calculate the concentration of bacteria in the water. Another approach is to detect the smells directly; this is usually done using techniques that require large scientific equipment, such as gas chromatography or mass spectroscopy.

“These are good ways to detect smell molecules, but they require a large amount of work before the sample is even ready to test,” said Dr. Park. “And all of these tests need to be done in a laboratory with expensive equipment – they’re just not suitable for the field.”

Dr. Park and the team wanted to develop a more convenient, compact device for testing water that is suitable for using on-site. In addition to contamination of drinking water, bacteria and other microbes can also contaminate rivers and lakes – for example, the algal blooms in Hong Kong. Catching this kind of contamination early means it’s easier to control.

When Thomas Edison first showed his moving pictures to the public in 1891, journalists flocked to his lab to understand how the camera could replicate the way our eyes work. Audio recorders and touch-sensitive tablets had a similar effect, capturing people’s imaginations when they were first introduced. While video, audio and touch technology is familiar to us today, there is not yet an equivalent device that successfully captures information for smell or taste.

“Our eventual goal is to develop a real human nose-like bioelectronic nose,” said Dr. Park. “In the human nose, there are about 400 different olfactory receptors. If we could develop our technology to include all of these, we would have a device that could smell anything we can, at lower concentrations.

Bacteria that contaminate water give off particular smells that are associated with a handful of smell molecules. Two typical odors – earthy and musty – are caused by two different molecules: geosmin (GSM) and 2-methylisoborneol (MIB). The new nose-like device can detect these smells at very low concentrations of just 10ng per liter of water. It’s also very sensitive and can spot a particular smell in a cloud of others.

Since their concern is the bad smell, Dr. Park and his colleagues naturally thought about how the human nose works and adapted its function as a sensor element. The human nose is more complicated than receptors for two smell molecules, so to make a true smelling device, the researchers will need to scale up their efforts.

A universal code for smells

The technology has many other applications, say the researchers. A smelling device could be very useful for the smell industry: perfume, cosmetics, wine and coffee. Certain diseases, such as lung cancer, can cause patients to give off particular smells; dogs have been known to detect these, and a bioelectronic nose opens the path to diagnosis through smell. There’s also a role for security, for example in drug searches at airports.

More fundamentally though, the researchers say it could help them build something that’s never existed before: a smell classification system.

“We don’t have a system for the classification of smell yet; it all still depends on our human sensory system. With our bioelectronic device, we can systematically detect and label smells, perhaps coming up with a universal smell code we can use to communicate in the future.

Elsevier has made the following article freely available until December 7, 2015:

Biosensors & Bioelectronics is the principal international journal devoted to research, design, development and application of biosensors and bioelectronics. It is an interdisciplinary journal serving professionals with an interest in the exploitation of biological materials and designs in novel diagnostic and electronic devices including sensors, DNA chips, electronic noses, lab-on-a-chip and μ-TAS. Read more.