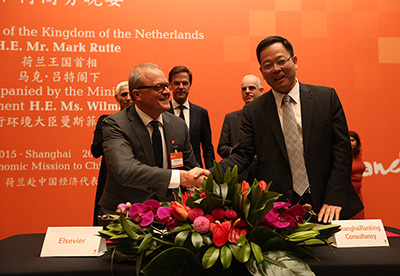 A recent economic mission to China sought to strengthen diplomatic and commercial ties between China and one of its key trade partners: the Netherlands. Dutch Prime Minister Mark Rutte was accompanied by over 70 business representatives from his country, including colleagues from Elsevier.

The Netherlands is in fact China's third-largest European trade partner; in 2014, mutual trade between the two countries totaled almost €44 billion.

This mission brought Dutch and Chinese companies together to “open doors” and sign agreements. For research and higher education, a key agreement centered on the delivery of data and analytics to the ShanghaiRanking Consultancy, whose first publication was the 2015 Best Chinese University Ranking report.

As China joins the ranks of the world’s most research-intensive nations, the ShanghaiRanking Consultancy plays a definitive role in driving research excellence by promoting the academic performance of China’s universities globally.

To further inform China’s universities of their standing on the world stage, M’hamed el Aisati, Director of Content & Analytics for Research Management at Elsevier, has been working closely with Prof. Dr. Nian Cai Liu, Chairman of the Board, and   Dr. Ying Cheng     , Managing Director of the ShanghaiRanking Consultancy, over the past year to develop analytical and data capabilities through the use of Scopus and SciVal. The data and analytical tools used for the ranking report serve to help research institutions set strategic priorities, make    investment decisions and shape research development policies.

The key role of international collaboration

For China, encouraging this type of collaboration is of central importance to its research production, which is formidable in volume and continues to increase. That’s because despite the high output, the rate at which Chinese research is read and cited by international researchers still lags  behind the world average, according to SciVal. Chinese researchers have already upped their game in seeking more international partners. If they continue to increase international collaboration, China’s research future will be bright. 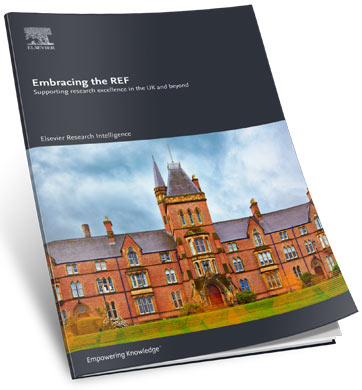 As part of Elsevier's  Research Intelligence services, the Analytical  Services team collaborates with nations around the world to prepare research assessments. They use data from Scopus – the world's largest abstract and citation database of peer-reviewed literature – along with sophisticated tools to show how institutions and nations compare.

For more information, download the 16-page Elsevier report Embracing the REF — Supporting research  excellence in the UK and beyond.

Iris Kisjes (@Kisjes) has worked at Elsevier for eight years, the past five in communications. She is currently Senior Corporate Relations Manager, based in Amsterdam. She has a keen interest in the knowledge economy, especially in relation to the valorization of science and the longevity of the higher education system.