Drones are the latest archaeological tool

Two archaeologists write about how they used drones to reveal a 1,000-year-old village in New Mexico

Dr. John Kantner of the University of North Florida and Dr. Jesse Casana of the University of Arkansas have been using drones to carry out an archaeological survey of a remote area in northwestern New Mexico. They have been studying the culture of the Ancient Puebloans, who lived in the region for more than 300 years beginning in the ninth century. Here, they write about the research they published this month in the Journal of Archaeological Science.  [divider]

Archaeologists have known since the 1970s that aerial images of infrared wavelengths can be very useful for surveying areas covered by vegetation or soil. However, this could be done only by satellites or helicopters, which are expensive and have limitations; affordable technology wasn't really available until now. The only other way to identify buried structures is by digging a large number of test pits, which is time-consuming and requires a lot of effort.

For our research, we used an unmanned aerial vehicle (UAV), or drone, to carry a thermal imaging camera that can detect archaeological features buried up to a half-meter below the surface of the ground.

We programmed our drone – the CineStar8 – to fly a precise path established by GPS, with the camera imaging the ground. Images were then collated using advanced photogrammetric methods, producing an accurate thermal map of the area. 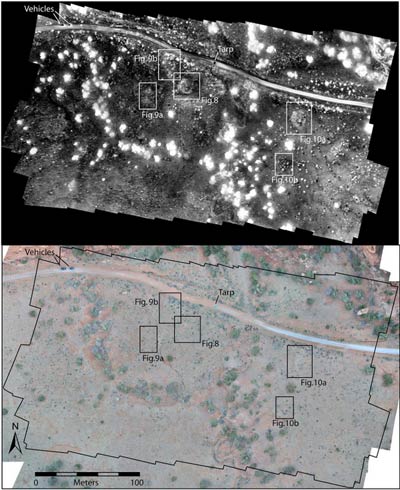 The process revealed details of a village about 1,000 years old, with structures that had never been seen before and would have taken a decade of work to be identified in the traditional way. Results showed unknown architecture and circular ceremonial structures (thought to be kivas), which are present in nearby areas, including Chaco Canyon, the monumental pilgrimage center that dominated the Puebloan world through the 11th century AD.

The precise location of buildings is important to make hypotheses on how social and political dynamics were shaped by, and interacted with, the strong religious culture of Chaco Canyon, and to shed further light on how the Ancient Puebloan people lived.

UAVs have several advantages over traditional forms of archaeological aerial imaging, particularly in their ability to cover large areas at a fixed altitude and speed under a wide range of wind and weather conditions. For aerial thermography, these capabilities are essential because there is a short window of time in which to capture imagery. To maximize archaeological visibility, thermal imagery has to be collected at a time of day when the contrast in thermal inertia is highest between the archaeological target and the background soil and ground cover. In addition, the entire area of the survey must be covered in as short a period as possible to reduce variations in thermal values due to a changing environment.

Impact of the results

Results enable the size and organization of most habitation sites to be readily mapped, and also reveal previously undocumented architectural features. Our methodology is easily replicable and produces visual data similar in quality to traditional archaeological geophysics but which can be collected very rapidly, over large areas, with minimal cost and processing.

We believe these results can have a profound impact not only on this particular area of research, but on the methodology of archaeological surveys around the world.

Elsevier has made this article freely available until August 3, 2014:

This article has received worldwide attention from the media. Here is a sample of articles: 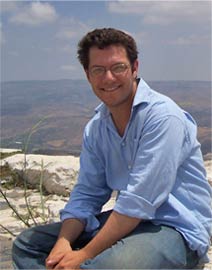 Dr. Jesse Casana is an Associate Professor of Archaeology in the Department of Anthropology and the Center for Middle East Studies at the University of Arkansas. His research investigates the history of settlement and land use along with the dynamic interactions of humans with their environment.

Dr. Casana directs a regional archaeological survey project in the upper Diyala (Sirwan) River Valley in the Kurdistan Region of Iraq, and collaborates on numerous other projects in the Middle East and North America. Much of his work, undertaken at the Center for Advanced Spatial Technologies, incorporates an emphasis on satellite and aerial remote sensing of archaeological landscapes. He currently directs the CORONA Atlas Project, using declassified, Cold War-era satellite imagery to investigate ancient landscapes at regional scales, as well as a project to develop new applications for low-altitude, UAV-based aerial imaging of archaeological sites. 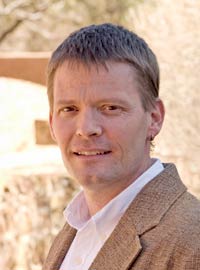 Dr. John Kantner joined the University of North Florida in August 2013 and is currently the Associate Vice President for Research and Dean of the Graduate School. He is an anthropological archaeologist investigating the respective roles of cooperative and competitive behavior in the development of sociopolitical inequality among small-scale societies.