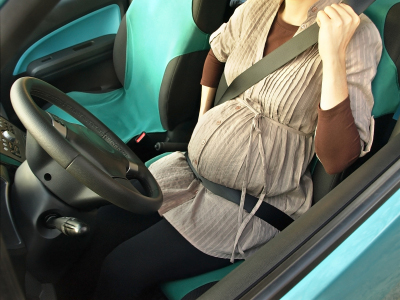 Failure to use seatbelts was associated with elevated rates of adverse pregnancy outcomes, including stillbirths, study authors found. (Photo ©iStockphoto.com/al_ter)[/caption]A new study published in the American Journal of Preventive Medicine indicates that motor vehicle crashes can be hazardous for pregnant women, especially if they are not wearing a seat belt when the accident occurs.

Trauma is a leading cause of maternal and fetal morbidity and mortality. Blunt abdominal trauma is of particular concern to a pregnant woman and her fetus since it can directly and indirectly harm fetal organs as well as shared maternal and fetal organ systems. Car crashes are responsible for most injuries requiring hospitalization during pregnancy; however, little is known about the relationship between auto accidents and specific fetal outcomes.

The study, which is the largest retrospective state-based study of its kind, looked at data for 878,546 pregnant women aged 16-46 years who gave birth to a single infant in the state of North Carolina between 2001 and 2008. Using vital records and crash reports, investigators were able to study the association among car crashes, vehicle safety features, and adverse pregnancy outcomes.

Investigators focused on four pregnancy outcomes: preterm birth, placental abruption, premature rupture of the membranes and stillbirth. They found that compared to women who were not involved in an auto accident, pregnant drivers had elevated rates of preterm birth, placental abruption, and premature rupture of the membranes after a single crash.

While previous studies had only looked at the link between one crash and adverse pregnancy outcomes, this new study also looked at women who had been involved in multiple motor vehicle collisions during their pregnancies. Following a second or subsequent crash, investigators found pregnant women had more highly elevated rates of preterm birth, placental abruption, premature rupture of the membranes and stillbirth. The investigators also found that the rates of these unfavorable outcomes increased as the number of crashes increased.

While this new study offers greater insight than existing reports, more population-based studies are necessary to increase understanding of the effect of multiple crashes, seatbelts and airbags on pregnancy outcomes.

"This study highlights the importance of crashes during pregnancy and their possible adverse effects on pregnancy outcomes. Clinicians should be aware of these effects and should advise pregnant women about the risk of being in a crash and the long-term consequences that crashes can have on their pregnancies," Dr. Vladutiu concluded. "Given the associations that were observed, a better understanding of the circumstances surrounding crashes during pregnancy is needed to develop effective strategies for prevention."

Eileen Leahy has handled media outreach for 14 years for a portfolio of Elsevier Health Sciences journals, including the American Journal of Preventive Medicine, Mayo Clinic Proceedings and The American Journal of Medicine. An experienced STM journal marketer, Eileen was responsible for the launches of numerous journals while on staff at Elsevier, most notably, theJournal of the American College of Cardiology and Gastroenterology. She continues working as an independent consultant specializing in the development and marketing of innovative online full-text publications.