Dr. Martin Blaser on The Daily Show with Jon Stewart

Martin J. Blaser, MD, a world-renowned researcher in infectious diseases, appeared onThe Daily Show with Jon Stewart this week. Dr. Blaser, who has studied the role of bacteria in human disease for over 30 years, talked about the threats associated with the overuse of antibiotics – a topic he wrote about in his book Missing Microbes: How the Overuse of Antibiotics Is Fueling Our Modern Plagues. 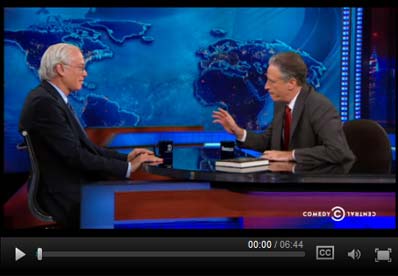 Dr. Blaser is the newest of the three editors of the forthcoming edition of Mandell, Douglas, and Bennett's Principles and Practice of Infectious Diseases, regarded as one of the top textbooks on infectious diseases.He has been responsible for reviewing a third of the new Mandell and consulting with his co-editors Jack Bennett, M.D., and Ray Dolin, MD, on their portions. Dr. Blaser contributions include overseeing sections about Microbial Pathogenesis, Anti-Infective Therapy, Bacterial Diseases, STDs, and GI/Food Poisoning. He also coauthored chapters on "Helicobacter pylori and Other Gastric Helicobacter Species," "Campylobacter jejuni and Related Species" and "Introduction to Bacteria and Bacterial Diseases."

Dr. Blaser is the director of the Human Microbiome Project at NYU Langone Medical Center. He founded the Bellevue Literary Review and has been written about in The New Yorker, Nature, The New York Times, The Washington Post and The Wall Street Journal. His 100-plus media appearances include The Today Show, Good Morning America, NPR, the BBC, The O'Reilly Factor and CNN. He lives in New York City.