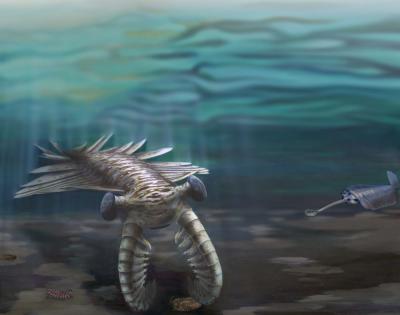 This image shows marine life during the Cambrian explosion (~520 million years ago). A giant Anomalocaris investigates a trilobite, while Opabinia looks on from the right and the "walking cactus" Diania crawls underneath. All of these creatures are related to living arthropods. (Credit: Katrina Kenny & Nobumichi Tamura)[/caption]The incredible burst of innovation in animals' body plans and habits during the Cambrian explosion, between 540 and 520 million years ago, can be explained by a reasonable uptick in evolutionary rates. The discovery, based on the first rigorous estimates of early evolutionary rates in arthropods, shows that evolution's "big bang" is compatible with natural selection as Darwin envisioned it, say researchers reporting their findings in Current Biology, a publication of Elsevier's Cell Press, today."

This simultaneous burst of life, with few or no precursors, had seemed at odds with Darwin's idea of gradual evolution through natural selection," said Dr. Mike Lee, an evolutionary biologist and Associate Professor at the University of Adelaide in Australia. "However, our results show that moderately accelerated evolution, sustained over a few tens of millions of years, could have produced this pattern. A five-fold increase in rates of evolution would compress about 100 million years' worth of change into about 20 million years—a relatively brief period in geological terms."

The researchers considered arthropods — the group including insects, spiders, and crustaceans — because they were the most diverse and successful animals during the Cambrian explosion and remain so today. Arthropods currently account for more than 80 percent of all animal species."To a first approximation, every animal species is an arthropod!" Dr. Lee said. "If we are interested in major patterns in animal evolution, arthropods are the key group to study."[caption id="attachment_27225" align="alignleft" width="400"] 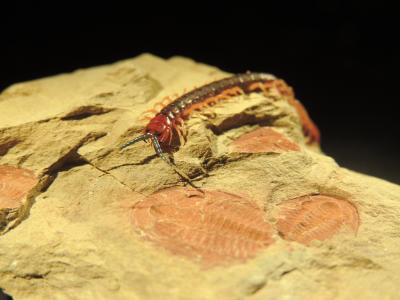 A living arthropod (centipede Cormocephalus) crawls over its 515-million-year-old relative that lived during the Cambrian explosion (trilobite Estaingia). A study of arthropods reveals that morphology and genes evolved five times faster during evolution's "big bang" compared to all subsequent periods: Fast, but still compatible with Darwin's theory. Both the centipede and trilobite are found on what is now Kangaroo Island, Australia. (Credit: Michael Lee)[/caption]With the help of the fossil record and molecular dating methods, Lee and his colleagues quantified the anatomical and genetic differences between living arthropods to infer evolutionary rates in the past. Their analysis shows that evolutionary change during the Cambrian period occurred about four to five times faster than present-day rates. They were surprised to see that genetic evolution and anatomical evolution were sped up by almost the same amount during the Cambrian.

Dr. Lee explained that those faster evolutionary rates are likely explained by game-changing innovations — predation, vision, and active swimming, for instance — that opened up a range of new possibilities for arthropods during the Cambrian. That kind of evolutionary fast-forward has also occurred when animals colonize new environments, he said. Think birds or mammals on islands, or snakes in the sea."When a lineage acquires a novel adaptation, they often undergo a burst of evolution, to fill up a newly opened range of environments and niches," Dr. Lee said.[divider]

Current Biology, Lee et al: "Rates of Phenotypic and Genomic Evolution during the Cambrian Explosion." The article is freely available until the end of September.[divider][caption id="attachment_18867" align="alignleft" width="150"]

Mary Beth O’Leary (@MaryBethPress) is Press Officer and Associate Media Relations Manager for Cell Press (@CellPressNews), based in Cambridge, Massachusetts. She began her career at Cell Press as an Senior Editorial Assistant for the journal Cell before transitioning into a role as Marketing/Publicity Coordinator. In December, she moved into her position as Press Officer for Cell Press’s 29 journals. A graduate of the College of the Holy Cross in Worcester, Massachusetts, she studied literature and art history.
comments powered by Disqus