Researchers have identified a cryptic new species of wild cat living in Brazil.

The discovery, reported in the Cell Press journal Current Biology today, is a reminder of just how little scientists still know about the natural world, even when it comes to such charismatic creatures. The findings also have important conservation implications for the cats, the researchers say.

Scientists had thought that there was a single species of housecat-sized Brazilian tigrina. However, the molecular data now show that tigrina populations in northeastern versus southern Brazil are completely separate, with no evidence of interbreeding between them. As such, they are best described as two distinct species.

"Our study highlights the need for urgent attention focused on the Brazilian northeastern tigrinas, which are virtually unknown with respect to most aspects of their biology," said Dr. Eduardo Eizirik, Associate Professor of Biosciences at Pontifícia Universidade Católica do Rio Grande do Sul in Brazil, noting that much more is known about the cats living in the southern part of the country. 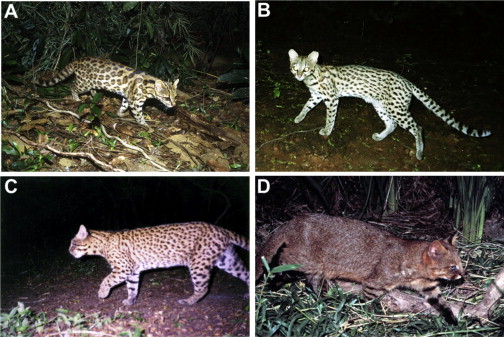 The new study by Dr. Eizirik, Dr. Tatiane Trigo of Universidade Federal do Rio Grande do Sul and their colleagues further revealed a complicated set of relationships between the tigrinas and two other species of neotropical cats. That evolutionary history includes ancient hybridization and movement of genes between the pampas cat and the northeastern tigrinas (Leopardus tigrinus).

In contrast, southern tigrinas (newly recognized as Leopardus guttulus) continue to hybridize with Geoffroy's cats, leading to extreme levels of interbreeding between the species along their contact zone. Those patterns add to evidence that hybridization can and does occur between distinct animal species.

As for the two tigrina species, the researchers suggest that they may be suited to different habitats, with the northeastern cats living primarily in savannahs, as well as dry shrub lands and forests, and the southern species living in denser and wetter Atlantic forests.

"Such distinct habitat associations provide a hint to potentially adaptive differences between these newly recognized species and may have been involved in their initial evolutionary divergence," Dr. Trigo said.

Moreover, Dr. Eizirik added, "All four species are threatened, and we need to understand as much as possible regarding their genetics, ecology and evolution to be able to design adequate conservation strategies on their behalf."[divider]

This article is freely available on the Cell Press website for two weeks, until December 11, 2013: