When science enters the realm of politics, science writers should seize the opportunity and make their stories meaningful. Here’s how

Nancy Shute, co-host of National Public Radio's Shots health blog, recently told a packed room of science writers, "I am here to speak about what happens when your sweet lamb of a science story goes political." 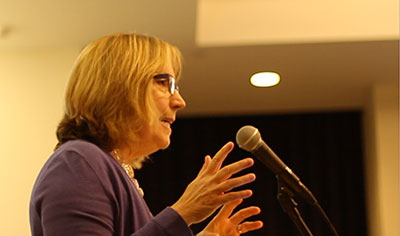 It's the best thing that can happen to a writer, she said: "It allows (you) to go beyond the immediate story and inform your readers using science. You can use people's fear of a deadly disease such as Ebola to help them understand the need for and importance of vaccines."

Shute (@nancyshute), whose coverage of Ebola has earned her the nickname "Ms. Ebola," took part in the panel Hot Button Science Writing: Diving into Controversy & Politics at the National Association of Science Writers (NASW) 2014 annual meeting in Columbus, Ohio, October 18.

Joining her on the panel were Coral Davenport (@CoralMDavenport), energy and climate policy reporter for The New York Times; and David Malakoff (@davidmalakoff), Deputy News Editor, Policy and Environment, for Science magazine. Cristine Russell (@russellcris), Senior Fellow at the Harvard Kennedy School and contributing editor for Columbia Journalism Review, was the moderator.

Russell noted that between Ebola and the 2014 mid-term elections, the rhetoric on both sides of the political spectrum was as hot as the fever induced by the Ebola virus. Politicians were calling for closing our borders and quarantines for healthcare workers. And NIH director Francis Collins said (in an interview in the Huffington post) that a vaccine for the Ebola virus would have been found if not for Congressional budget cuts. 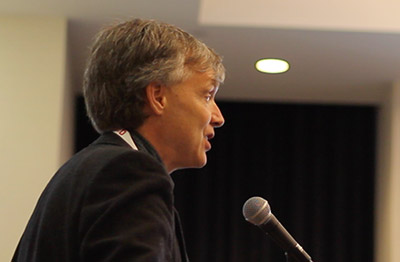 The basic message the panelists had for the writers was that when a story goes political, they had to get out of their comfort zone of writing "nice" articles about scientific research and breakthroughs and be part of the bigger picture.

"Don't become a sidebar to this or any other breaking science story," warned Russell, who noted that the main Ebola articles were not being written by science writers but by national and political reporters.

For Makaloff, science writing is about far more that what takes place in the lab – and that's a good thing:

"A journalist's dream is a story about sex, politics and money; science policy has two out of three," he said. "And if you find one that also has sex, even better."

He told the audience not to be afraid of writing about science policy: "But don't pitch it as a science policy story – pitch it as a story that involves people fighting over issues, money and politics and … will affect thousands of people's lives. If you can provide science policy information to people in an interesting way that they find relevant, you will get many clicks on your story."

[pullquote align="right"]"Don't pitch it as a science policy story – pitch it as a story that involves people fighting over issues, money and politics and … will affect thousands of people's lives"[/pullquote]

(And as we writers know, that's what gets us more assignments.)

Malakoff told the writers they could attract a bigger audience by telling science stories through people. A story about Valerie Barr, who lost her job as an National Science Foundation (NSF) Rotator (NSF Rotators are temporary academic appointees who help the agency run its grant-making programs) because of her alleged support of "radical groups" when she was in her 20s drew many clicks when it was reported in the Science Insider Blog.

Barr's story highlighted the fact that these volunteers serve at the pleasure of the NSF and have few of the protections extended to other federal workers. Not exactly exciting news. So why did this inside the beltway story about one scientist attract so many readers?

"It's an interesting story because it uses a person to tell a story about science policy," Malakoff said. "And people wanted to know what had happened to Barr."

The take home message: stories about people resonate beyond the science community and generate clicks.

When science is not (just) science

Davenport told the audience, "I'm not a science writer; I cover energy policy." She said that when she interviewed for her current position at The New York Times, she told them, "Climate change is about everything: the White House, public policy, economics and jobs." She said Obama has made climate change a priority by pushing through an agenda of Environmental Protection Agency regulations on carbon pollution from coal-fired power plants – the strongest actions ever taken by any president on climate change. They have also been described as a "war on coal."

Davenport, who has been writing about energy policy since 2006, said that this was the first time climate change has emerged as a top political issue during a campaign. "There was no mention of it in the presidential debates of 2012."

She noted that this year, climate change was hotly debated in Senate and governors' races. "Democrats are being proactive, portraying Republican candidates as being out of touch on these issues." She also noted that Democrats were going on the attack with ads paid for by billionaire Tom Steyer, a hedge-fund manager who quit his job to advocate for support of climate change policy. "All of this is a preview for the presidential election in 2016," she predicted.

Davenport stressed that she does not get into debates on science. "I use the phrase 'the established cause of human climate change' and then delve into the energy and policy issues."

Her advice to writers: use the science they know to report the bigger story that will affect the economy, politics and the world around them.

Davenport also spoke about the need for good science to support a story. "With the release of the National Climate Assessment Report, there is now real science to make arguments," she said. She noted that in 2013, the White House released the President's Climate Action Plan. "The president sees his work on climate change as part of his legacy," she said. "And that makes it a page one story for the Times."

Use the science to tell a story

But science is just part of the story, she advised, urging the journalists there to write about how proposed changes would raise people's electric bills and cost jobs.

Their message: you have to dig deeper. Science is about facts. You can't debate facts. But you can debate priorities and how proposed changes affect people.

When Shute addressed the audience, the Ebola crisis (and panic about it) was in full force. She noted that the story that gathered the most hits on NPR's website in October (2.6 million page views and counting) was the post "No, Seriously, How Contagious Is Ebola?"

It used a simple illustration to show a metric for how contagious a disease is. Another post used research analyzing international airline travel, and the data "was amazingly accurate on when Ebola would arrive in the US," Shute said.

In August he said that Ebola would come to the United States. He was right. The mistake he made was saying that we could handle it. It would not be a problem. But when a health official speaks in certainties and then is proven wrong, it destroys trust.

Shute contrasted this with the statements by former New York City Mayor Rudy Giuliani during the anthrax scare after 9/11: "Giuliani kept saying 'I don't know. We need more information. I don't know, but I am trying to find out.'" Shute said. "Saying I don't know is a powerful phrase to build trust. And it's what science writers do. We explain to our readers what is known and not known."

When writing about the unfamiliar, look for 'navigators'

During the question and answer session, one audience member said she was frustrated that when her local paper assigned her to write a story about Ebola, no one from the CDC called her back. Shute's advice: "Forget the CDC. Find someone local as it is hard to get top people during a crisis. Call your local hospital and ask them what they are preparing to do."

Many science writers in the audience expressed fears about writing about science policy. Malakoff asked one audience member "in the last five years, have you written about a topic that you were not well-versed in?" The person said yes, neurobiology. Malakoff suggested that she and other writers take the same approach to learning about science policy as they would writing about another unfamiliar field. "Look for navigators, people with an expertise who don't have any agenda, what I call honest brokers, who can help you understand the story in a broader context."

Shute's suggestion to science writers: "Ebola concerns in the United States offer a window into general issues in healthcare delivery. Use it to lead people into a larger discussion about science and broaden the dialogue. The issues raised by Ebola can lead to great stories on vaccines, on how various diseases are transmitted and ways to contain and control Ebola both here and in West Africa."

For those who want to see comments on the session, the Twitter hashtags for the session were #controversy, #SciWri14.

Watch video interviews with the panelists

How should we report on science policy? – Science magazine's David Malakoff

Ebola reporting: Where do we draw the line? – NPR's Nancy Shute

David Levine (@Dlloydlevine) is co-chairman of Science Writers in New York (SWINY) and a member the National Association of Science Writers (NASW). He served as director of media relations at the American Cancer Society and as senior director of communications at the NYC Health and Hospitals Corp. He has written for Scientific American, the Los Angeles Times, The New York Times, More magazine, and Good Housekeeping, and was a contributing editor at Physician's Weekly for 10 years. He has a BA and MA from The Johns Hopkins University.