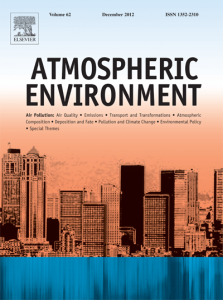 Dr. Stephens and members of his Built Environment Research Group at IIT conduct energy and air quality research within the built environment, primarily with field measurements in and around buildings. Their work continues to advance building science methods for assessing energy efficiency, indoor air quality, and environmental exposures within buildings.

Atmospheric Environment publishes papers on the consequences of natural and human-induced changes to the earth’s atmospheres, including processes involving chemistry and physics of the atmosphere as well as subjects related to human health, welfare, climate change and environmental policy. Like this report, many of its articles look at how human activity can influence the atmosphere and human health.

Dr. Stephens wrote this summary of his research for the blog of his Built Environment Research Group at IIT, which investigates problems and solutions related to energy consumption, indoor and outdoor air pollution, environmental health, and sustainability within the built environment. Elsevier Connect is publishing it with his permission.[divider]

The 3D printers were used to print small, colorful frogs.[/caption]

The development of low-cost desktop versions of three-dimensional (3D) printers has made these devices widely accessible for rapid prototyping and small-scale manufacturing in home and office settings. Many desktop 3D printers rely on heated thermoplastic extrusion and deposition — a process that has been shown to have significant aerosol emissions in other studies in industrial environments.In this work, we measured size-resolved and total ultrafine particle (UFP) concentrations resulting from the operation of a common type of these commercially available desktop 3D printers inside a commercial office space in Chicago. The printers were used to print small colorful frogs. (We each got to take home a frog of our own!) The resulting measured particle concentrations during each operation period are shown below:[caption id="attachment_26145" align="alignnone" width="800"] 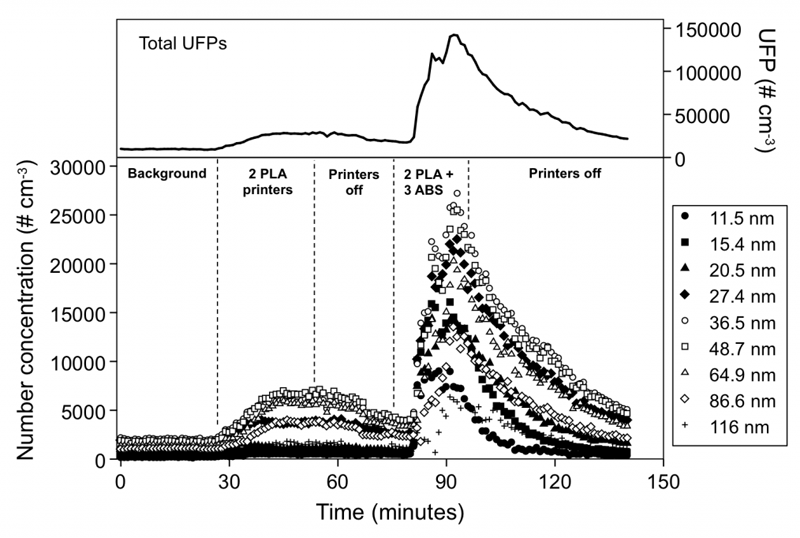 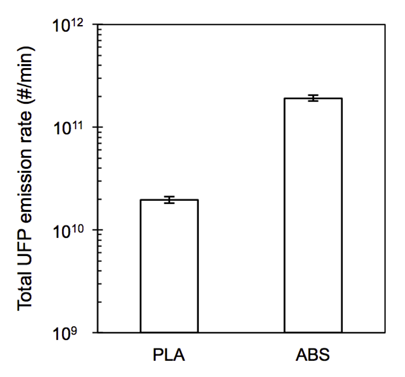 Estimates of total UFP emission rates from individual 3D printers using either PLA or ABS feedstock[/caption]From the data, we also estimated size-resolved (11.5 nm to 116 nm) and total UFP (< 100 nm) emission rates and compared them to emission rates from other desktop devices and indoor activities known to emit fine and ultrafine particles. Estimates of emission rates of total UFPs were large, ranging from ~2.0×1010 #/minute for a 3D printer utilizing a lower temperature polylactic acid (PLA) feedstock to ~1.9×1011 #/min for the same type of 3D printer utilizing a higher temperature acrylonitrile butadiene styrene (ABS) thermoplastic feedstock. (You can read about some differences in these two feedstocks here and here).

These emission rates are on about the same order as several other devices and activities known to emit UFPs, such as cooking on a gas or electric stove, burning scented candles, operating laser printers, or even burning a cigarette! (Some of you may also be thinking, “wait, laser printers emit as many small particles as a cigarette??” Yep!)

Health effects of exposure to UFPs

Human exposure to UFPs appears to be pretty important from a health perspective. These small particles deposit efficiently in both the pulmonary and alveolar regions of the lung, as well as in head airways. Deposition in head airways can also lead to translocation to the brain via the olfactory nerve.

However, we don’t know much about the composition of these particles. We have some evidence that PLA-fed 3D printers may be less harmful than ABS-fed printers not only because of differences in emission rates, but also because PLA is actually biocompatible and used in a lot of medical procedures. We also are aware of a few older studies showing toxicity of ABS fumes (both gases and particles) to rats and mice. But how these interact in our respiratory systems and any associated adverse health effects are still largely unknown.

Regardless, because most of these devices are currently sold as standalone devices without any exhaust ventilation or filtration accessories, results from this work suggest caution should be used when operating in inadequately ventilated or unfiltered indoor environments. You should probably operate these under exhaust ventilation fume hoods (like you would operate an exhaust fan in your own kitchen). Alternatively, this opens the door for fabrication of some filtration devices. Overall, we believe that more controlled experiments should be conducted to more fundamentally evaluate particle emissions from a wider range of desktop 3D printers, as we tested only one product herein.[divider] 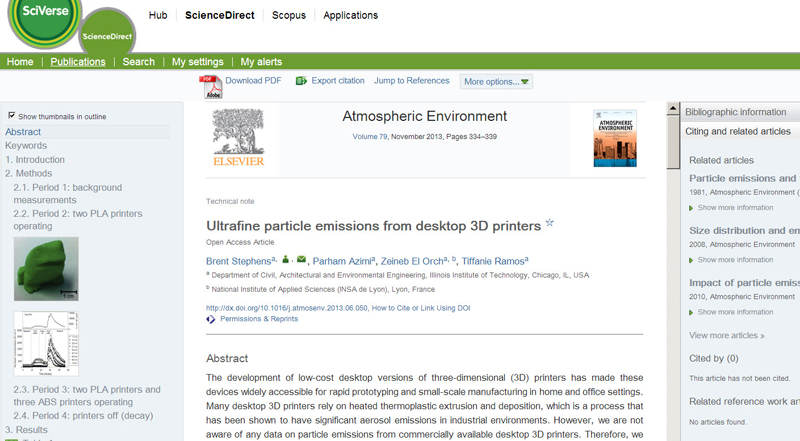 This article has been covered by various media outlets and tech websites:

We are very grateful to Built Environment Research Group members Tiffanie Ramos, Parham Azimi, and Zeineb El Orch for their help in making the measurements and writing the paper. We are also grateful for former IIT CAEE graduate student Bobby Zylstra of The 3D Printer Experience and for Julie Friedman Steele of The Metaspace for providing access to the test space.