Conference: What will it take to achieve an #AIDSFreeWorld?

Recent findings from UNAIDS showed a 33% reduction in new HIV infections between 2001 and 2012, sparking optimism that it might be possible to end the HIV/AIDS pandemic. However, despite falling rates of new infections and increasing access to antiretroviral drugs in low- and middle-income countries, 1.6 million people worldwide died from HIV in 2012, and 35.3 million continue to live with the disease. 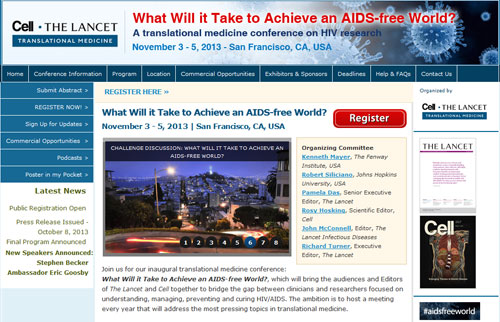 On the heels of the UNAIDs report, Cell and The Lancet — leading journals in biology and medicine — are holding a conference to address the key question: What will it take to achieve an AIDS-free world?

The conference, to be held in San Francisco November 3 to 5, is designed to bridge the gap between clinicians and researchers focused on understanding, managing, preventing and curing HIV/AIDS. The Twitter hashtag is #aidsfreeworld.

The program brings together world-renowned speakers with a broad range of expertise across the interlocking fields of HIV research and clinical practice, including Dr. Eric Goosby, head of the US President's Emergency Plan for AIDS Relief (PEPFAR); Dr. Anthony Fauci, director of the National Institute of Allergy and Infectious Diseases at the US National Institutes of Health; Dr. David Baltimore, Professor of Biology, California Institute of Technology, and recipient of the 1975 Nobel Prize for discoveries on the interaction between tumor viruses and the genetic material of the cell; Dr. Françoise Barré-Sinoussi, recipient of the 2008 Nobel Prize for Medicine for the discovery of HIV; Dr. Stephen Becker, Deputy Director in HIV at the Bill & Melinda Gates Foundation; and Timothy Brown (the "Berlin patient"), the first person to be cured of HIV.

San Francisco was one of the first places where the condition we now call AIDS was diagnosed in the early 1980s, and it continues to be a leading center of research on HIV/AIDS. California is among the US states with the highest rate of adults and adolescents living with HIV (363 per 100,000 population) and newly diagnosed with HIV (19.2 per 100,000 population), according to the US Centers for Disease Control and Prevention.

The scientific advisors for the conference are Dr. Robert Siliciano of Johns Hopkins University in Baltimore and Dr. Kenneth Mayer of Fenway Institute in Boston.

Commenting on his involvement with the conference, Dr Mayer said:

This Cell-Lancet symposium comes at a unique point in the 30-plus years of the AIDS epidemic. Recent research has demonstrated that antiretrovirals can decrease HIV transmission, but many implementation science questions remain. Other recent efforts have provided glimmers of hope for the development of safe and effective preventive vaccines and/or cures for HIV.

This meeting will provide an unprecedented opportunity to hear from the investigators and thought leaders that are leading the charge to turn the tide on the epidemic. The format will allow for cogent plenary talks and many opportunities to talk with key scientists, clinical investigators and public health officials.

'Tell us what you are going to talk about'

When asked this question, here's what some of the speakers had to say:

Session 1 - Targeting the Reservoirs & Working Towards a Cure

The experience of the Berlin patient showed the world that HIV can be cured. The oncology drug vorinostat has been shown to awaken latent HIV from latency. Work is now ongoing to develop safe and effective ways to purge HIV genomes that persistent despite therapy, and arm the immune system to destroy the last vestiges of HIV infection. Tools to eradicate established HIV infection will be a key part of reaching an AIDS-free world. — David Margolis, MD, University of North Carolina

AIDS will not be conquered until we find a way to stop the transmission of HIV. Many are working on vaccines to that end, but the pathway to success remains clouded. We have developed a mode of protection involving use of a viral vector to program muscle cells to make large amounts of monoclonal anti-HIV antibodies and we have found that they efficiently protect mice (altered to contain human immune cells) against infection by HIV. We are translating these laboratory findings to clinical evaluation. — David Baltimore, PhD, California Institute of Technology

Classical strategies to HIV vaccine design have failed and alternate approaches based on understanding the interaction of the virus with broadly neutralizing antibodies are beginning to reveal their potential. — Dennis R. Burton, PhD, The Scripps Research Institute, Ragon Institute of MGH, MIT and Harvard

There is compelling evidence that antiretroviral treatment has the potential to stop the spread of HIV. The critical and urgent importance of earlier and wider antiretroviral treatment for people with HIV infection will be described along with the substantial challenges to the use of treatment as prevention, and what we can immediately do to overcome these challenges.— Myron Cohen, MD, University of North Carolina, Chapel Hill

Antiretroviral therapy has turned HIV infection from a nearly universal fatal infection into a chronic disease marked by increased risk of a series of age-related conditions, including heart disease, bone disease and a variety of cancers. Why these conditions are happening at higher than expected rates and how these conditions might impact healthy aging is the focus of intense research. — Steven G. Deeks, MD, University of California, San Francisco

The potency of current antiretroviral drug regimens is such that almost all people who are adherent to therapy maintain long-term viral suppression.  Given the low rate of viral load rebound and drug resistance, and the breadth of regimen options available, this is likely to be case for the entire lifetimes of most people with HIV in well-resourced settings.  What then are the residual excess disease risks among people with HIV who maintain viral suppression? — Andrew Phillips, MD, University College London

View the full program on the conference website.[divider]

John McConnell (@JohnSMcConnell) has been an editor at The Lancet since 1990 and was founding Editor of The Lancet Infectious Diseases in 2001.