Call for nominations: Elsevier Foundation Awards for Women Scientists in the Developing World

This year's awards are for physics and mathematics. Nominations will be accepted through October 17.

Dr. Charon Duermeijer, Publishing Director and Head of Elsevier Physics Journals, said the international recognition these awards bring is very important for women scientists and the field as a whole. Her own PhD is in geophysics:

I'm very excited about supporting women in physics in this way. Such awards really boost someone´s career and impact in the community by helping them stand out in this male-dominated field of research. I hope we will receive great nominations for women around the globe who are passionate about physics.

Nominations are being accepted for the Elsevier Foundation Awards for Early-Career Researchers in Developing Countries.

Eligibility: Nominees should be women in physics and mathematics early in their careers (within 10 years of receiving a PhD) from the 81 scientifically lagging countries as defined by TWAS.

To submit a nomination: Nomination form and instructions

The five winning scientists will receive a cash prize of $5,000 and all-expenses paid attendance at the 2015 AAAS Annual Meeting in San Jose, California, where they will be honored in an award ceremony.

In addition, this year the Abdus Salam International Centre for Theoretical Physics (ICTP), based in Trieste, Italy, is offering each of the winners free attendance and accommodations at one of ICTP's renowned workshops and conferences.

The winners also will receive a year's access to Elsevier's ScienceDirect and Scopus, the world's largest abstract and citation database of peer-reviewed literature.

Nominations for the 2015 physics and mathematics awards will be accepted from early-career scientists (within 10 years of receiving a PhD) from the 81 scientifically lagging countries as defined by TWAS.

All nominations will be reviewed by a committee of eminent scientists representing the five regions in the discipline selected, including members of TWAS and OWSD, and chaired by OWSD President Dr. Fang Xin of China. 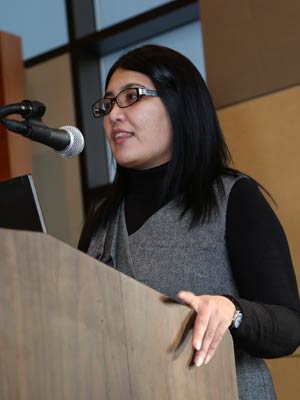 "This award will provide women physicists and mathematicians with much- needed recognition for delivering high-impactful research both regionally and internationally," said Dr. XIn. "All of our winners have served as an inspiration to their peers, and I'm sure that the five 2015 winners will build on this important tradition."

The 2014 awards, presented at the American Association for the Advancement of Science (AAAS) Annual Meeting in Chicago, honored five researchers in chemistry from Yemen, Nigeria, Uzbekistan, Jamaica, and Indonesia for their research excellence.

Receiving this award has made me honored and touched that my hard work in science has not gone unnoticed, and I think I encourage other woman scientists to do their best in all that they do.

The organizers and sponsors

The Elsevier Foundation provides grants to institutions around the world, with a focus on support for the world's libraries and for scholars in the early stages of their careers. Since its inception, the Foundation has awarded more than 80 grants worth millions of dollars to non-profit organizations working in these fields. Through gift-matching, the Foundation also supports the efforts of Elsevier employees to play a positive role in their local and global communities. The Elsevier Foundation is funded by Elsevier, a world-leading provider of scientific, technical and medical information products and services.

Organization for Women in Science for the Developing World (OWSD)

The Organization for Women in Science for the Developing World (OWSD) is an international organization affiliated with TWAS. Headed by eminent women scientists from the South, OWSD has more than 4,000 members. The central role is to promote women's access to science and technology, enhancing their greater involvement in decision-making processes for the development of their countries and in the international scientific community. Created in 1989, OWSD's overall goal is to work towards bridging the gender gap in science and technology. OWSD uses its forum to promote leadership, exchanges and networking for women scientists as well as for discussions to assist in the development of national capabilities to evolve, explore and improve strategies for increasing female participation in science.

The World Academy of Sciences (TWAS)

The World Academy of Sciences (TWAS) works to advance innovation and sustainable prosperity in the developing world through support for research, education, policy and diplomacy. TWAS was founded in 1983 by a distinguished group of scientists under the leadership of Abdus Salam, the Pakistani physicist and Nobel laureate. They believed that developing nations, by building strength in science and engineering, could build the knowledge and skill to address such challenges as hunger, disease and poverty. Today, TWAS has some 1,100 elected Fellows from 90 countries; 15 of them are Nobel laureates. The Academy is financially supported by the Italian government and other partners, and administered by the United Nations Educational, Scientific and Cultural Organization (UNESCO).