The Elsevier Foundation, TWAS and OWSD announce 2014 awards for chemistry

Each year, the Elsevier Foundation Awards for Early Career Women Scientists in the Developing World recognize talented scientists from Africa, the Middle East, Asia, Latin America and the Caribbean whose work could contribute to life-saving knowledge and therapies worldwide. The prizes rotate between the life sciences, chemistry, and physics/math disciplines. 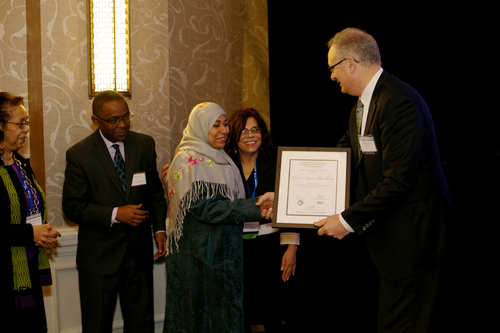 2013 Awards: Dr. Huda Omer Basaleem of Yemen accepts her award from David Ruth, Executive Director of the Elsevier Foundation, the AAAS conference in February. She was recognized for “her dedication in the fight against cancer and for the well-being of women and children in the Arab region.” She is surrounded by (left to right) Dr. Shirley Malcom, Head of Education and Human Resources for AAAS, Dr. Romain Murenzi, Executive Director of TWAS and Professor Maya de la Torre, Vice President, Latin America, OWSD. (Photo by Alison Bert)

The awards are intended to recognize research excellence, build capacity in developing countries, and inspire a new generation of women scientists. They also provide professional visibility for the winners, including exposure at a prestigious interdisciplinary conference.

The 2014 awards will focus on chemistry. The five winning scientists will receive a cash prize of $5,000, a year of complimentary access to ScienceDirect, and all-expenses paid attendance at the annual American Association for the Advancement of Science (AAAS) conference in February 2014, where the awards will be presented.

Nominations will be accepted by OWSD from April 10th through September 15, 2013.To qualify, nominees must be early-career scientists (within 10 years of graduating with a PhD degree) from the 81 scientifically-lagging countries as defined by TWAS. The nominations will be reviewed by a committee of eminent scientists from the five regions involved, including members of TWAS and OWSD, and chaired by OWSD President Fang Xin.

"Since this prize was initiated, we have been deeply impressed by the important and inspiring research that is being done by early-career women scientists in the developing world,” said Professor Fang. “The 2013 competition was a great success, and we look forward to a strong new round of nominations for some of the world’s most promising young scientists.” 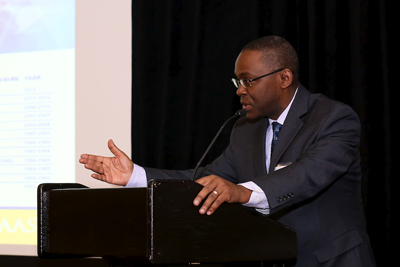 Professor Romain Murenzi, PhD, speaks at the award ceremony at the 2013 AAAS conference in Boston. He is the Executive Director of TWAS and the former Minister of Science and Technology for the government of Rwanda, where he was born. (Photo by Alison Bert)

“TWAS sees these awards for early-career women scientists as extremely important," said Professor Romain Murenzi, the Academy's executive director. “Not only do they recognize life-enhancing and life-saving research, but they send a message to younger generations of girls and women: We need you — and we need your best work — to address the great challenges that confront all people and all societies.

“We're honored to work with the Elsevier Foundation and OWSD to recognize this excellence in research."

As Executive Director of the Elsevier Foundation, David Ruth said, “It’s an honor to partner with TWAS and OWSD, given their unique insights into the conducting science in the Global South. These awards have taught us a great deal about the special challenges and dynamics faced by women scientists.”[divider] 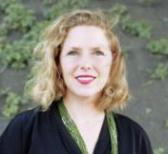 Ylann Schemm (@ylannschemm) manages Elsevier’s corporate responsibility program, which focuses on advancing women in science and developing research access in the developing world. She also oversees the Elsevier Foundation’s New Scholars program which supports projects to expand the participation of women in STEM and the Innovative Libraries in Developing Countries program with capacity-building projects in science, technology and medicine.

hope fully i will get z chance

HALLO, elsevier was my first source of study "Graduat engenieer of state in biological and agronomical science" from Chlef univesity Algeria, so thank you very muche of your contribution in my success by your amaizing articals.

I want to publish my first artical in you journal it is a summery of my thesis form as an article in english language, I know that is perhaps full of mistakes "vocabulary, or formes" but you could give me helpe for a good performance of this artical.

What about publishing a very interresting book not publiting yet but already complished inspired to my thesis also « Evaluation of the quality of yoghurt with deshydrato-frozen fruits, Analytical technics, Instruction and guide” writing in france language

pleasse, give me suggestion for that

Last question, could I win somme money, it's importante for me to accomplish my Ph.D IN Canada, I have a project about renouvable energy which concerne a prototype of transformation a domestic "menial" green wast into thermel and electric energy.

Thank you for your comment. Here are a few resources that may be able to help you in your quest to publish a paper:

Here is a list of Elsevier's journals: http://www.elsevier.com/journals/title/a. This is a link to our Language Editing Service: http://webshop.elsevier.com/languageediting/. And I also recommend Google Translate (http://translate.google.com) for basic communication. On Elsevier Connect, we post announcements from time to time about awards and scholarships for researchers, like this one here, so it's good that you are keeping your eyes open.