Findings have implications for research in education, substance abuse treatment, and dietary and lifestyle interventions 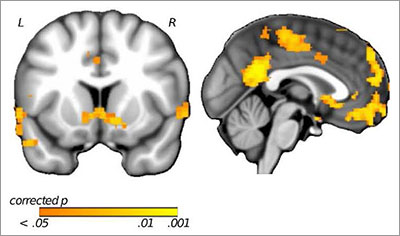 What makes people decide whether to persist or to give up on their goals in the face of setbacks?

New research published today in the Cell Press journal Neuron reveals that when people perceive themselves as having control over the setbacks they encounter, a particular part of the brain is engaged, and they're more likely to persist in their goals. But when people feel they have no control over setbacks, as when a student attributes a failed exam to unfair test questions rather than to correctable study habits, a separate part of the brain processes that feeling and determines whether or not the person persists.

Past research has provided insights about how brain responses to undesirable events help us learn to avoid the actions that lead to bad outcomes. We know less, however, about how we process undesirable events, such as setbacks, in ways that promote persistence rather than avoidance.

To investigate, researchers asked volunteers to have their brains scanned through functional magnetic resonance imaging while they played a game in which they experienced setbacks and then decided to persist or give up on a goal they were pursuing (depicted as a path). After every setback, participants had to decide whether to persist with their previously chosen path or pursue a different path. Setbacks were presented in a way that emphasized either controllable or uncontrollable factors.

We found that responses in the ventral striatum — a region previously linked to learning via trial and error — related to persisting when setbacks were viewed as controllable. We also found that responses in the ventromedial prefrontal cortex — a region previously linked with emotion regulation — related to the process of coping with negative emotions from uncontrollable setbacks in order to persist.

So when people experience controllable setbacks, they can correct their mistakes and persist, but when setbacks are uncontrollable, they may need to cope with frustration and other emotions in order to persist.

The results are also relevant to the delivery of negative performance evaluations, which can prompt students to drop classes, employees to quit jobs, or learners to quit online training programs. "Our findings suggest that institutions that wish to promote persistence must pay attention to the way they deliver performance feedback and the way people perceive such feedback," said co-author Dr. Jamil Bhanji, a postdoctoral researcher in psychology at Rutgers University.

This article is freely available for two weeks, until September 18, 2014: