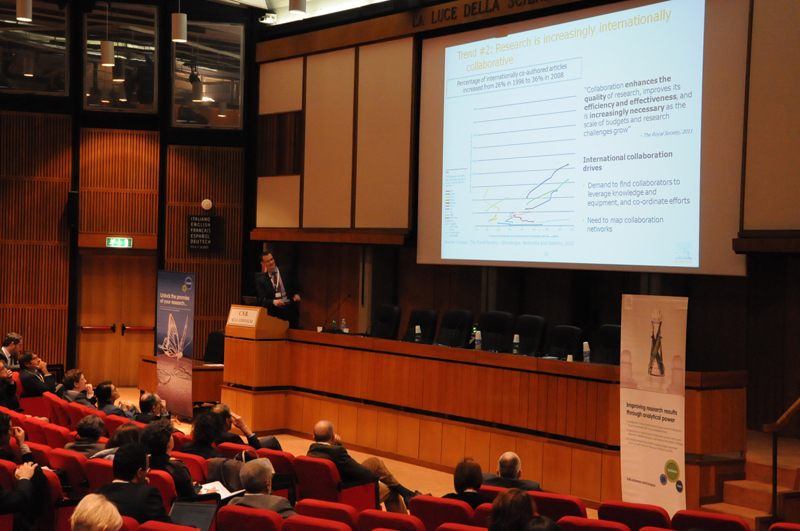 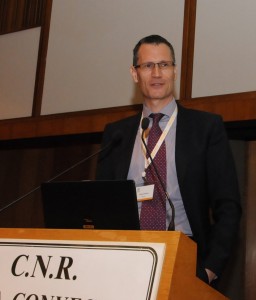 For the past few years, the media has been reporting on a “brain drain” in Italy, with academics and students worried about the economy, job opportunities and government cuts in research and development spending.

However, a recent analysis challenges the idea that the nation’s research community is experiencing a net loss of intellectual capital.The analysis was done by the SciVal Analytics team in Elsevier’s Academic and Government Markets department. Using data from Scopus, they looked at Italian researcher affiliations between 1996 and 2011.

Their conclusion: Mapping out the so-called “brain circulation” of Italy presents a rather complex picture in terms of the migration flows of researchers to and from Italy. But contrary to what is thought, most Italian researchers tend not to move away; in fact, Italian universities and research centers are attracting many foreign students.[note color="#f1f9fc" position="right" width=320 margin=10 align="alignright"]

Key findings were presented by Dr. Michiel Kolman, Senior VP of Global Academic Relations at Elsevier, at the National Research Policy Forum in Rome November 14. Organized by Elsevier in collaboration with the National Research Council of Italy, the event hosted debates and discussions with politicians, professors, senior researchers, and leaders of universities and other research institutes on how to drive research excellence and innovation at a national level.

The event was the first of a series of Research Policy Forums, developed by Elsevier to bring together policymakers, professors and senior researchers to discuss the current state of science at a country-specific level. Each forum in the series will be hosted in a different country and will create opportunities for dialogue between representatives of government and academic institutes. 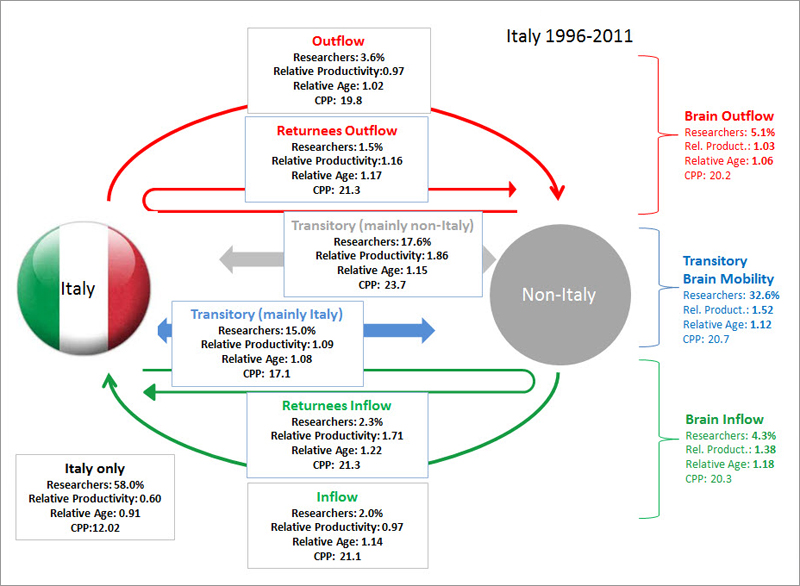 The Brain Circulation analysis was led by Alberto Zigoni, SciVal Consultant for Southern Europe, the Middle East and Africa. Projects he is leading include the largest SciVal Experts project in Europe, for the Italian Ministry of Health. He lives near Padua, Italy. Before joining Elsevier, he worked as an IT consultant in the financial and government sectors. He has an MS in computer engineering from the University of Padua.[/note]

The analysis of Italy’s brain circulation used the following categories to define the status its researchers:

Here is what the research found:

Drilling deeper into the analysis, findings highlight that the pool of “stable” researchers is marked by low productivity and scientific impact (number of papers per year and number of citations received per paper). “Visitors,” on the other hand, have the highest productivity and scientific impact, while they rank second in terms of professional seniority. “Migrants” showed a very high productivity level and the highest professional seniority among all groups. Alberto Zigoni, who led this research as SciVal Consultant for Southern Europe, the Middle East and Africa, explained how they came to their conclusions:

Looking at the two flows of migrant researchers (the 5.1% outflow and the 4.3% inflow) we saw that, although there is indeed a net outflow – or brain drain – from Italy, it is very small in size (0.8% of the whole group). Furthermore, the scientific impact measured for the two flows is almost identical, while the overall seniority of the researchers moving to Italy is even higher than that of the ones settling abroad.We concluded that the brain circulation phenomenon has a positive outcome and plays a key role in the internationalization of research, which is crucial in the globalized landscape of R&D. For this reason, we think policymakers should be encouraging brain circulation rather than worrying about it.In addition, our findings showed that Italy grew its expenditure in research from 1996 to 2010 on average by 2.3 percent per year, although in the last two years, the trend has become negative. Italy's gross domestic expenditure on research and development (GERD) has risen an average of 2.3 percent per year from 1996 to 2010, although spending has declined in the past two years. (Source: OECD Main Science and Technology Indicators 2011)

At the same time, the scientific production of Italy in the same period grew an average of 6 percent a year — almost three times faster than the overall budget growth and higher than other research-intensive countries such as the US and UK. 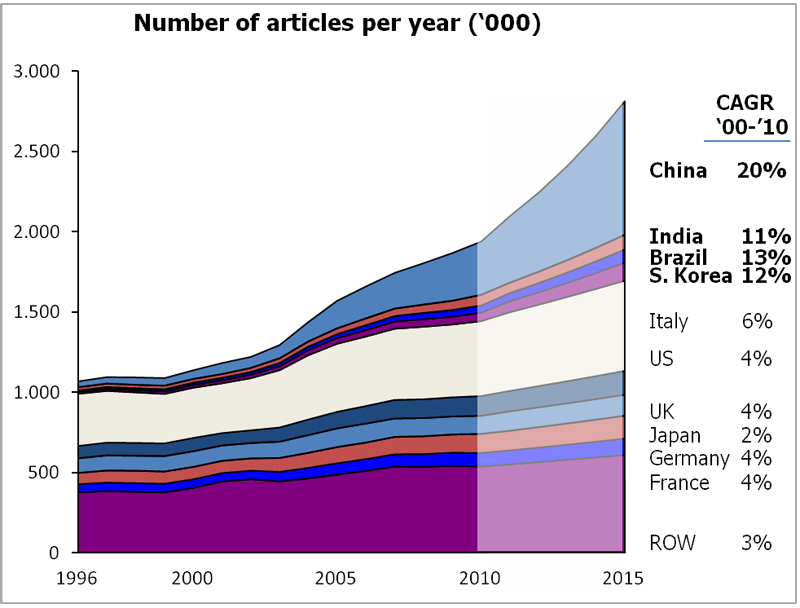 Research in Italy has also become increasing interdisciplinary, as shown by a 2011 study conducted by Elsevier. This trend can be seen on the SciVal Spotlight country map for Italy, which shows scientific production from 2007 to 2011. 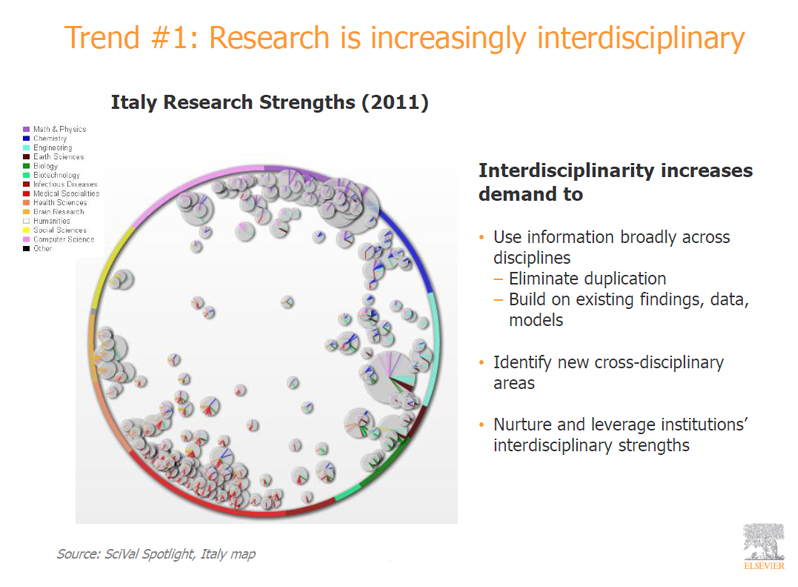 In this SciVal Spotlight country map for Italy, the bubbles represent research competencies, while their position and the different colors of the lines within them show the disciplinary mix involved.[note color="#f1f9fc" position="center" width=800 margin=10]

Dr. Luis Sanz-Menéndez, Director of the Institute of Public Goods and Policies (CSIC) in Spain and Chair of the Committee of Scientific and Technological Policy of the international Organisation for Economic Cooperation and Development (OECD), had to cancel due to a strike in Spain that affected his travelling.

Welcome speeches were given by Charles Pallandt, Managing Director of Sales & Marketing at Elsevier, and Dr. Enrico Brugnoli, Director of Research for the National Research Council of Italy in the Institute of Agro-environmental Biology and Forestry. (Dr. Brugnoli gave the welcome speech in place of  CNR President Dr. Luigi Nicolais, Professor Emeritus at the University of Naples “Federico II,” who could not come due to a strike in Italy. Also, Elena Ugolini, Undersecretary of State of the Italian Ministry of Education, University and Research, could not come due to the strike, and her speech was read by an Elsevier representative.[/note][divider]

Claudio Colaiacomo, Regional Director for Southern Europe at Elsevier, manages a team of 10 people to coordinate the marketing and sales activities on over 200 universities and research centers. He has been working for Elsevier since 2005 covering  various roles. He Lives in Rome and holds a BS and Masters of Science in Physics.

Giovanna Bartens Sibille, Customer Development Manager for Southern Europe and Israel, is responsible for regional marketing initiatives and usage development in the academic and government sectors. She is a lawyer with an executive master's degree in business administration from the Instituto de Empresa and a master's degree in economics  from Bocconi University. She has extensive work experience in public and private organizations in Europe and South America.[/note]

What I miss in this study is information relating to those graduating from university in Italy. If you look only at researchers, you are looking at the people that have already 'made it' to a certain level. How about the graduates that never manage to get a research position? How many of them do not decide to leave their country for personal reasons and instead take a job that is 'below' their capabilities? While these people do not actually leave the country, their capabilities may be under-utilised. This represents a brain-drain not only for Italy, but the whole of the scientific community.

We did not look at the population of graduates not pursuing a research career. The aim of our analysis was to somehow question the statement that the best researchers are leaving Italy and that there is a significant brain drain going on.

Anyway, yours is a very interesting suggestion and could indeed become the focus of a dedicated study: we would need, though, to integrate an external data source to get the number of graduates.