Brain and behavior are modifiable, even as we get older

Stereotypes of aging suggest that growing older is inevitably accompanied by loss of memory, a marked decline in thinking and problem solving, an inability to learn and, eventually, dementia.

A more optimistic stereotype holds that people actually become more knowledgeable as they move through life and that aggregating knowledge and experience leads to wisdom. 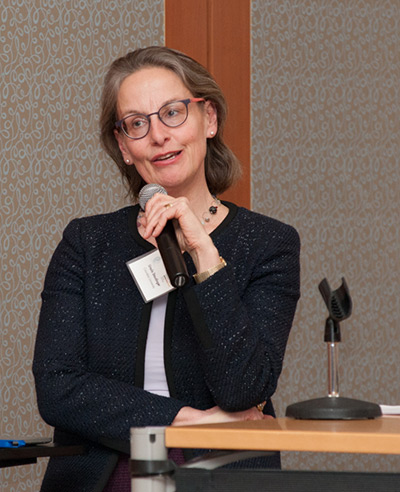 “These two views are apparent  throughout history,” said Dr. Ursula Staudinger, lifespan psychologist and Director of the Robert N. Butler Columbia Aging Center at Columbia University. “As the philosopher   Solon     said around 600 BC, ‘Even though my hair is turning silver, I’m still learning many things.’ According to the stereotype, he shouldn’t have been able to do that. We now know Solon was about 60 when he said this, which would be the equivalent of something like 100 now.”

Dr. Staudinger was one of two researchers who presented solid evidence about the brain’s capacity to learn and grow throughout life in a presentation called “Cognitive Plasticity in Adulthood,” held at the German Center for Research and Innovation in New York in January.

Dr. Staudinger made the case that “the brain is a very curious thing and needs to be stimulated. Instead of saying ‘use it or lose it,’ we need to say ‘challenge it or lose it.’”

Why some people’s brains are better able than others to meet challenges — solving problems, mastering new skills and retaining high levels of cognitive ability even into old age — was addressed by Dr. Ulman Lindenberger, Director of the Center for Lifespan Psychology at the Max Planck Institute for Human Development in Berlin.

The role of experience

If the stereotype were universally true, “how is it possible that most societies are governed by people age 50 and older?” Dr. Staudinger asked. “If you look at boards of trustees, the average age is 70, and it works quite well — members make good decisions. So how do you reconcile  that with the idea that brains only deteriorate with age?”

The answer lies in part with experience. It seems the more information we gather about a given field or domain, the more likely we are to maintain competence in that area because the brain develops strategies to do so. Dr. Staudinger pointed to a classic study by Dr. Timothy Salthouse, Professor of Psychology at the University of Virginia and Director of the Virginia Cognitive Aging Project,  demonstrating that the performance of skilled older typists is comparable to that of much younger skilled typists. The reason is that older typists compensate for age-associated changes in the speed of psychomotor performance by looking ahead in the text and anticipating upcoming strokes, rather than  simply typing what’s in front of them.

How does our cognitive ability compare with that of past generations?

Large-scale longitudinal studies suggest the social and cultural environment has “enormous power” when it comes to the unfolding of cognitive capabilities, Dr. Staudinger said. Research comparing people of the same chronological age in different historical timeframes — for example,  50-year-olds born in 1890 versus 50-year-olds born in 1940 — reveal that cognitive performance is better in those born more recently. Thus, people with the same chronological age may have different cognitive ages, depending at least in part on the historical framework they were born and lived in.

The findings hold true even for smaller differences time differences. A recent study of 90 year-olds — one group born in 1905 and another in 1915 — revealed a significant increase in cognitive performance for the group born just 10 years later. Moreover, a study conducted in the UK showed  “the first evidence for a decrease in the prevalence of dementia” over the past 20 years, and brain plasticity is likely to play a role in this regard, as well, Dr. Staudinger observed. Similarly, a study by Dr. Staudinger and her colleagues projecting into the future suggests that although  the UK population overall will be older in 2042, the trend toward improved cognitive abilities for people born later means that “even though the population will be chronologically older, it will be cognitively younger.”

How important is stimulation?

Much research shows that mental stimulation, through both work-related activities and leisure-time activities, has positive effects on cognitive aging, Dr. Staudinger said. Although having a “complex, interesting” job throughout one’s working life has been linked to aging better,  “that doesn’t mean it’s just too bad for people with jobs of low complexity,” she emphasized. Her team’s 16-year study of assembly line workers showed that those whose tasks changed during the course of the study had significantly better reactions time compared with those  who did only the same task. The study showed that “more work-task changes are associated with higher levels of cognitive functioning later in life” as well as more gray matter in areas of the brain that are relevant for learning and attention. 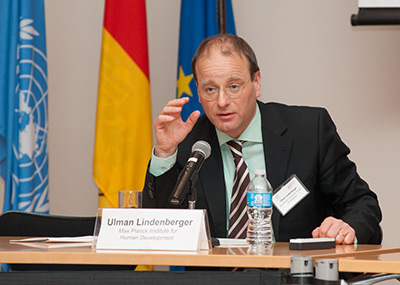 Much of Dr. Lindenberger’s research involves exploring  the mechanisms that help people maintain high levels of cognition. Given the studies Dr. Staudinger referred to and his own work showing “massive improvement” in cognitive test results in people who were 75 in 2010-13 versus those who were 75 in 1990-93, Dr. Lindenberger quipped, “You  might say that 75 is the new 55, based on the data and with just a slight exaggeration.”

Dr. Lindenberger has identified four “metamechanisms” that could underlie the brain’s ability to take advantage of education, experience, stimulation and other factors, helping people retain their cognitive abilities into old age:

1. Compensation is “any process or mechanism that occurs in response to a change in task demands,” Dr. Lindenberger said. With respect to cognitive aging, it describes the “structural or functional reorganization of the brain in response to age-induced losses.”  Although people generally think of how the brain compensates after a stroke, allowing a person to function even after part of the brain is damaged, Dr. Lindenberger explained that the analogy doesn’t necessarily hold when it comes to normal cognitive aging because aging is not a discrete event  in space and time. Therefore, he is less inclined to accept compensation as a primary mechanism for retaining cognitive abilities.

2. Selection is based on the idea that the brain of a younger adult can execute a given task in more than one way — and that some of those ways may be more vulnerable to aging than others. He gave the example of an athlete executing a high jump using either the fosbury flop or  the straddle. “The fosbury flop gets you higher, but with age, it can end up hurting your back, so eventually you just use the straddle approach. It doesn’t get you as high, but it’s less vulnerable to aging. The idea is that the brain uses different strategies to solve problems and  those that are more resilient to aging are more likely to survive.”

3. Preservation, or maintenance, essentially means that individuals differ in the rate and extent of brain changes and pathology, with some showing little or no age-related decline. “When you look at older adults who do well on a cognitive task, the way they accomplish the task  is similar to the way younger adults do the task,” Dr. Lindenberger said. “From a preservation standpoint, the best way to maintain cognitive performance is to maintain the brain implementation strategies of younger adults. Successful cognitive aging then comes down to postponing the aging  process rather than compensating for it.” Studies have shown that people who are able to do this have better connections in their brain, and that those who maintain this “youth-like processing” show fewer false memories in old age than those who don’t, according to Lindenberger.  “Whenever older adults, brain-wise, look like younger adults, they also perform better.”

4. Plasticity, or restoration, occurs in response to a “mismatch” between the demands on the brain and its apparent current capacity. “When there’s a demand on the system and the available resources are not quite sufficient to meet these demands, over time, there  seems to be a plastic response whereby the brain reorganizes to meet the demands and show a new behavior,” Dr. Lindenberger explained. Plasticity does have limits, however. It is held in check by stability mechanisms in the brain; otherwise, “there would be no reliability in brain processing  and it would be a disaster. One big hope is that through a combination of pharmacology and experience we might be able to reopen windows of plasticity in a focused way that enables brain functioning to remain high.”

In older age, it is difficult to distinguish plasticity from maintenance, Lindenberger acknowledged. But from a practical standpoint, it may not make a difference. Population studies suggest that more people are maintaining higher levels of function now than ever before, and that trend will continue  into the future. At the same time, human aging is “variable across and malleable within individuals,” said Lindenberger, and the brain’s ability to adapt and rise to challenges — through whatever mechanisms — can help stem cognitive decline.

Marilynn Larkin is an award-winning science writer and editor who develops content for  medical, scientific and consumer audiences. She was a contributing editor to The Lancet and its affiliated medical journals for more than 10 years and a regular contributor to the New York Academy of Sciences' publications  and Reuters Health's professional newsfeed. She also launched and served as editor for of Caring for the Ages, an official publication of the American Medical Directors Association.  Larkin's articles also have appeared in Consumer Reports, Vogue, Woman's Day and many other consumer publications, and she is the author of five consumer health  books.