As researchers take on multiple roles, big data innovations are helping them manage the increasing complexities and gain broad exposure for their work

Gone are the days when scholarly publishing simply meant presenting research discoveries in bound publications to inform and advance  the knowledge of academicians. Today’s forward-thinking scientific publishers use technology to help researchers be more efficient in their multiple capacities, and accelerate the discoverability of researchers’ work to provide them greater exposure. 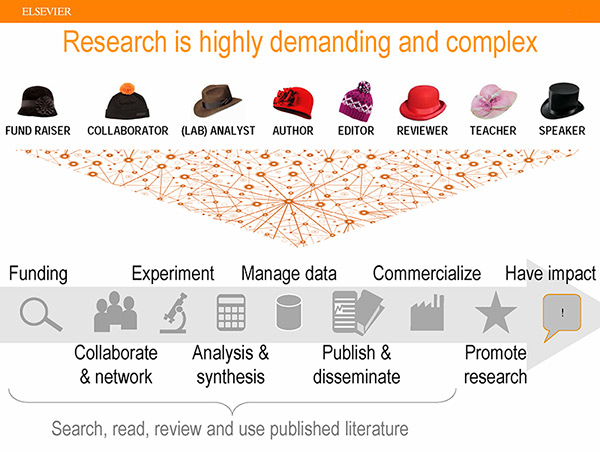 Here is a translation of the full article by Yu Dawei for Caixen.com.

From a small Dutch publishing house of over a century devoted to distributing research, to an international multimedia publishing company with more than 20,000 books and journals serving science and healthcare communities worldwide – counting among its flagship products The Lancet and Cell – Elsevier continues to advance. 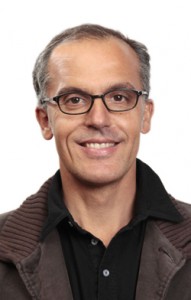 “Researchers spend an average of about 25 percent of their time searching for information and understanding the works of their peers,” said Olivier Dumon, Elsevier’s Managing  Director of Research Applications & Platforms. “Instead of just publishing scientific papers, Elsevier is now deploying big data solutions and Internet technologies to facilitate the entire research process, driving greater research efficiencies and efficacies.”

[pullquote align="right"]“The large investments poured into Chinese research and development have allowed China’s scientific output to grow at breakneck speed, and Elsevier can help raise the efficiency and productivity of Chinese researchers.”[/pullquote]

According to Dumon, the road to becoming a leading researcher is often fraught with challenges since the individual is likely to perform a variety of functions, such as searching for information relating to his developmental work, applying for research funding, purchasing equipment, putting together  a collaborative team, publishing his own research and, occasionally, filing for patents. “A researcher’s journey is long and arduous, and few really succeed in their different roles, if at all.”

Dumon’s answer to overcome these challenges is a workflow platform that efficiently and effectively helps scientists identify potential collaborators, mine the findings of similar research, develop higher-quality scholarly articles, and increase the discoverability of their research publications.

With Elsevier’s current offering of its ScienceDirect and Scopus databases as well as the Mendeley platform, all critical areas of the researcher workflow have  been comprehensively addressed, said Dumon.

Prior to joining Elsevier, Dumon headed up research and development at AT&T and eBay and discovered, first-hand, the challenges researchers faced: labor-intensive information retrieval processes, the lack of data visualization tools and an undersupply of publishing channels. When Elsevier approached  him to offer him a position that would allow him to apply his technological expertise to empower researchers, Dumon’s interest was piqued.

Facilitating the Researcher Workflow – the Power of Three

The way scientists search for content is akin to shoppers searching for merchandise, having to undergo multiple references before landing on the right information. Through predictive analytics, a researcher’s search behavior can now be analyzed to offer him the most appropriate and relevant reading  recommendations to optimize his search efforts.

And that’s what Dumon did. By applying collaborative  filtering – a type of recommendation algorithm powered by big data solutions – the click-through rate for recommended reading lists on ScienceDirect increased three-fold. Advanced data processing combined with sophisticated algorithms turn ordinary data into insightful information that  has the potential to accelerate scientific endeavors and improve scientific output.

Currently, ScienceDirect experiences an average download rate of 25 articles per second from around the world. Elsevier’s other major databank – the Scopus database of abstracts and citations – indexes over 50 million articles from more than 20,000 publications from 5,000 publishers.

Scopus is, by far, the world’s most comprehensive STM abstract and citation platform, covering articles from Elsevier and other leading publishers such as Wolters Kluwer, the Institute of Electrical Engineers, Wiley, Springer, Nature and the American Chemical Society, to name a few.

Among its 15,000 journal titles, a large number of high-quality Chinese journals are also indexed by Scopus, including Theoretical  and Applied Mechanics, Chinese  Physics Letter, and National Medical Journal of China among others.

Finally, there is Mendeley – acquired by Elsevier in 2013 – which is a free reference management tool, works as a social network platform for academics and functions as a databank for research data.

Dumon revealed that Elsevier is looking to include database citation as a legitimate form of academic evaluation.

Not only can big data analytics aid the productivity of scientists, it has the potential to also detect publishing fraud, academic article brokering and other scholarly misconduct.

Recently, Elsevier’s engineering database Ei (The Engineering Index) announced its decision to delist Biotechnology: An  Indian Journal (BIJ) over concerns of poor quality and irrelevance of article content, some of which were out of scope for the field of biotechnology. Most of the questionable articles originated from Chinese authors.

Dumon said that big data analytics can potentially detect an anomaly in any journal where there is a sudden spike in the number of articles originating from the same region. In 2014, Ei delisted 15 journal titles, three of which exhibited synonymous inappropriate publishing practices as BIJ.

“China is making astonishing scientific progress,” said Dumon. “The large investments poured into Chinese research and development has allowed China’s scientific output to grow at breakneck speed, and Elsevier can help raise the efficiency and productivity of Chinese researchers.”

In response to China’s restrictive and controlled access to foreign academic resources and information – a common complaint among researchers – Dumon said he has yet to come across any Chinese researcher who is not able to get his hands on a piece of important research as reference  for his work.

Read the story in Chinese on Caixin.com

Based in Singapore, Jason  Chan is the Director of Corporate Relations for Asia Pacific and leads all corporate, media and policy communications efforts across the region as well as acting as a central communications counsel and resource for Elsevier senior management in Asia. He is a communications practitioner of 18 years,  having worked at EMC International, Seagate Technology and Hill & Knowlton. He has a BA degree in Mass Communications from the Royal  Melbourne Institute of Technology (RMIT) in Australia and joined Elsevier in June 2013.