This spring, science writer David Levine was among nine journalists invited to meet with Israeli researchers in a trip sponsored by American Associates, Ben-Gurion University of the Negev. Here, he writes about the work of sleep experts at the university – and shares his own experience with sleep apnea.

There are a lot of jokes about snoring, but to anyone who sleeps next to a person who snores, they probably don't find it too funny. And in some cases, snoring can serve as a wakeup call that your partner suffers from obstructive sleep apnea (OSA), which causes breathing to "pause" during sleep because the airway has become narrowed or partially blocked.

[pullquote align="right"] OSA is a serious medical disorder that can cause high blood pressure,heart problems, strokes and daytime sleepiness.[/pullquote]

OSA is a serious medical disorder that left untreated can cause high blood pressure,heart problems, strokes and daytime sleepiness. People with OSA who are undergoing surgery need to let the medical team know in advance because the drugs used in anesthesia suppress breathing, which could lead to complications during and after surgery.People with untreated OSA who drink heavily or take medications that suppress breathing (such as tranquilizers, sleeping pills, narcotics and muscle relaxers) are at risk of dying in their sleep.

An estimated 50-70 million US adults have a sleep or wakefulness disorder, according to the Centers for Disease Control. The CDC notes that lack of sleep has many causes, but OSA plays an important role, and snoring is a major indicator of OSA. In a paper on the CDC website "Raising Awareness of Sleep as a Healthy Behavior," the authors note that "short sleep duration (<7 hours of sleep per night) and poor sleep quality are associated with cardiovascular morbidity and metabolic disorders such as glucose intolerance, which may lead to obesity, diabetes, heart disease, and hypertension. … Children who experience short sleep duration are more likely to become obese than those who do not."

In addition, the authors note that insufficient sleep can lead to depression, deficits in cognition, memory and learning and a reduced quality of life.

Meanwhile, the National Highway Traffic Safety Administration estimates that in the US, up to 6,000 fatal crashes each year are caused by drowsy drivers.

I’m very interested in sleep apnea because I suffer from a mild form of the disorder – meaning it won't cause me to die younger or die in my sleep, although my former girlfriend did threaten to smother me with a pillow.

Snoring can be loud. I had always heard as loud as a train whistle, but I found an article in a British newspaper about a British grandmother's snoring that was recorded at 111 decibels, which is louder than a jet plane. (Most snoring ranges between 60 and 80/90 decibels, compared to normal talking which is about 60 decibels.)

My children once recorded my snoring with a cassette recorder I bought them. They played it over and over again and laughed each time. 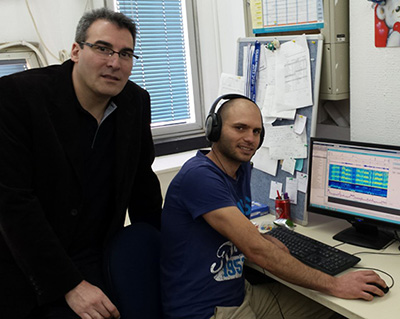 The research at Ben-Gurion University was especially interesting to me because it makes the process of getting tested much easier; patients can do the test at home instead of sleeping overnight in a sleep clinic.

Sleep experts at the Ben-Gurion University of the Negev (BGU) have developed a new approach to measure sleep duration and detect sleep disorders that is cheaper and easier alternative to polysomnography (PSG), which is the gold standard of diagnosing sleep apnea and dates back to the 1950s. Their new test uses a small device with a microphone, similar to a digital recorder, to measure breath sound analysis (BSA) and record a patient’s breathing. It does not require the use of electrodes or sensors, and lab personnel do not have to be present. Their paper in which they describe testing 150 people who spent a night in a sleep lab using BSA and traditional polysomnography sensors, received worldwide news coverage after being published February 24th in PLOS Online .

I was invited by Drs. Ariel Tarasiuk, who heads up the Sleep-Wake Disorders Unit at BGUs Soroka University Medical Center, Yaniv Zigel. PhD, head of the Biomedical Signal Processing Research Lab in BGU’s Department of Biomedical Engineering, and Eliran Dafna, who conducted the study as part of his PhD research, to their lab. Since it was daytime, there were no patients being tested, but they did show me the results of BSA tests they had conducted.

If Dr. Tarasiuk were not a sleep researcher, he could have had a great career as a comic. He told me of his training in sleep medicine in New York and said, "If you sleep well in New York City, something is probably wrong with you." He admitted to not being a good sleeper, noting it gets harder with age.  During his presentation to journalists, he had us laughing as he spoke about gender differences in men and women who snore. "When a man snores, the woman stays in bed by her man's side. If the woman snores, the man often goes to the couch – a recipe for divorce."

But he is dead serious about OSA:

If OSA were any other disease it would be called a plague. It not only affects the person's health but also leads to fatal car accidents by sleep deprived truck drivers and train engineers.

In the United States, drowsy driving is responsible for at least 100,000 car accidents, 40,000 injuries, and 1,550 deaths per year, according to the National Highway Traffic Safety Administration.

Dr. Ziegel said an estimated 800 million people worldwide have poor sleep quality, including OSA, snoring and insomnia. "It's a huge public health issue compounded by the problem that 80 percent of people are unaware they have a problem," he said.

If diagnosing sleep apnea is not difficult why don't more people get sleep tests?

Dr. Tarasiuk said that one of the main problems is it's not an easy sell:

Who wants to go spend a night in a sleep lab hooked up to wires that monitor their breathing , heart and brain waves?

It's also a laborious process. "You have to go to your primary care physician, get referred to a sleep specialist, get authorization from your insurance company and then make an appointment that could take months as there are limited number of beds available," he said. 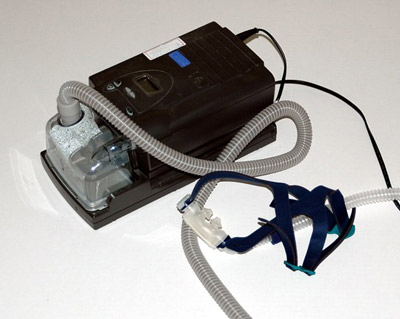 Another barrier is that the patient has to arrange a night away from the family. "And if you prescribe CPAP to a patient, you then need to determine how well they are doing with another sleep test in the lab,” Dr. Tarasiuk explained. “For many people this is too much."

Because of the many challenges, Dr. Tarasiuk and his colleagues saw the need for a test that could be done at home. "There are too many patients, not enough beds, and many people will never get tested if they have to come to a lab,” Dr. Tarasiuk said. “Any test at home will never be as accurate as spending the night in a lab with a technician watching you. But if BSA leads to more people being diagnosed and treated that is very important."

When I mentioned that there are apps on Smartphones that claim to measure your sleep quality, Dr. Zigel said no app can diagnose OSA or other sleep disorders. And although the researchers declined to comment on their reliability, it was clear that they did not think highly of them. When I showed Dr. Zigel the results of my "snore app," he said "it's just a record of noise. It could be anything."

I had a sleep test upon my return from Israel. It was to measure how well the dental device I use worked as compared to a CPAP mask. I had tried CPAP several years ago and couldn't tolerate it. Most people can't. The compliance rates are low (estimates range from 30 percent to 50 percent), and many machines end up as paperweights in closets. My sleep apnea is mild so I am able to use a mandibular advancement device, which pushes my lower jaw forward to keep my airway open. It was made for me by a dentist who specializes in this field and cost $2,300, of which insurance covered 80 percent. In appearance, it’s similar to a mouth guard people use to keep their teeth from grinding.

I took a sleep test this time to see how well my device was working. My test took place at the office of Dr.Omar Burschtin, a sleep medicine specialist who is on the faculty of the NYU School of Medicine. At his office he has a sleep lab with several rooms with beds and his staff conduct tests six nights a week. I spent half the night sleeping with the dental device and the other half with a CPAP machine. I was hooked up to wires that monitored my brain activity, eye movement, oxygen and carbon dioxide blood levels, heart rate and rhythm, breathing rate and rhythm, the flow of air through my mouth and nose, snoring, body muscle movements, and chest and belly movement. Dr. Burschtin told me I did better on the CPAP machine then the dental device, but the dental device was fine as long as I slept on my side. He recommended that I continue to use the dental device and consider getting a pillow that makes you sleep on your side.

I also asked him about the snoring apps, to which he replied: "I don't know much about them. The best snoring detector is your partner."

David Levine (@Dlloydlevine) is co-chairman of Science Writers in New York (SWINY) and a member the National Association of Science Writers (NASW). He served as director of media relations at the American Cancer Society and as senior director of communications at the NYC Health and Hospitals Corp. He has written for Scientific American, the Los Angeles Times, The New York Times, More