According to the Asia-Pacific  Economic Cooperation (APEC), member economies constantly face devastation from more than 70 percent of the world’s natural disasters, ranging from typhoons, floods and mudslides to drought and wildfires. Exacerbated by climatic changes, the frequency and intensity of such occurrences are also  on the rise. Referencing statistics from a United  Nations report, APEC cited that natural disasters affected nearly 80 million people and caused an estimated $60 billion in economic losses across the Asia-Pacific in 2014.

As host country and champion of the 2015 APEC Science Prize for Innovation, Research and Education  (ASPIRE), the Philippines recognized the urgency to accelerate development of disaster risk solutions. They chose the theme of Disaster  Risk Reduction: Understanding the Role of Climate Change and Variability. The focus was oninnovative technologies that have the potential to help APEC economies adapt to the changing climate, protect the natural environment and build resilient and sustainable societies. 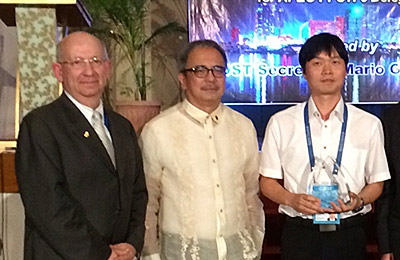 Of the 12 nominated entries for 2015, APEC members named South Korea’s Dr. Jong-Seong Kug as the winner for his work on developing weather prediction models to more accurately forecast extreme weather patterns to improve the  capacity of governments businesses and the public to mitigate disaster risks. For his winning work, Dr. Kug collaborated with researchers from other APEC economies. At the award ceremony August 17 in Manila, he said:

Understanding the rules of our earth is the only way to fight against the effects of climate change. We are making important strides in our efforts to apply new climate change models in the Asia-Pacific. The key is for the scientific community to continue to work together to take this undertaking forward  to more fully capture the benefits.

An Associate Professor  at Pohang University of Science and Technology’s  School of Environmental Science and Engineering in South Korea, Dr. Kug’s El Niño prediction model has helped the Korea Meteorological Administrationbetter understand tropical climate dynamics, and forecast and track extreme weather. His research  has also elevated the effectiveness of the APEC Climate Center, an inter-governmental seasonal prediction system operated by member economies as they respond to the majority of the world’s natural disasters. 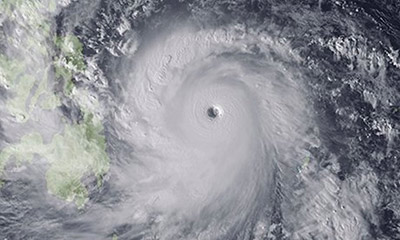 “The Pacific Rim is the epicenter of the increasingly lethal and destabilizing effects of climate change,” explained Secretary  Mario Montejo of the Philippine Department of Science and Technology, who championed the ASPIRE theme of climate change. “The severity of the typhoon season thus far — and the El Niño that is bringing historic drought to some parts of the region and flooding to others — underscore the extent of  the threat we face.

“Innovation, cultivated through cross-border research, can boost preparedness needed to protect lives and livelihoods amid the surge in turbulent weather. Dr Kug’s work is indicative of the progress being made on this front among APEC economies and that we must see more of.”

[pullquote align="right"]“Innovation, cultivated through cross-border research, can boost preparedness needed to protect lives and livelihoods amid the surge in turbulent weather." — Mario Montejo, Secretary, Philippine Department of Science and Technology.[/pullquote]

The annual ASPIRE award recognizes young scientists who have demonstrated a commitment to excellence in scientific research, as evidenced by scholarly publication, and cooperation with scientists from other APEC member economies. Both Wiley and Elsevier are sponsors of the ASPIRE prize money of $25,000.

“Scientific collaboration across the Asia-Pacific is driving the advancement of research and innovation worldwide,” said Mark  Allin, President and CEO of Wiley. “The work of young researchers like Dr. Kug is enhancing our understanding of the changing climate and bringing forward innovative solutions to help us weather climate-related disasters.”

“Dr Kug’s research has the potential to save lives and reduce the economic consequences that are today all too frequently associated with extreme weather,” said Youngsuk  “YS” Chi, Chairman of Elsevier. “We are inspired by the contribution of this year’s ASPIRE winner and his fellow nominees in the creation of knowledge that brings new hope.”

Dr. Brad Fenwick, Elsevier’s Senior VP of Government & Academic Relations for Elsevier, said the principle behind Elsevier’s support of APEC goes deeper beyond just the sponsorship of the ASPIRE prize, highlighting that  the mission of both organizations are, in fact, somewhat aligned.

“APEC aims to drive sustainable economic growth and prosperity in Asia Pacific, and Elsevier plays a part in that by empowering the academic and health communities to make better decisions and groundbreaking discoveries that advance the boundaries of knowledge and human progress,” Dr. Fenwick  said. “We aid in transforming the way the academic and medical communities conduct research, develop products, care for patients and nurture next-generation talent by creating positive impact, greater value and better outcomes from information.”

Read more about the 2015  ASPIRE nominees and past years’ winners.

Based in Singapore, Jason Chan is the Director of Corporate Relations for Asia Pacific and leads all corporate,  media and policy communications efforts across the region as well as acting as a central communications counsel and resource for Elsevier senior management in Asia. He is a communications practitioner of 18 years, having worked at EMC International, Seagate Technology and Hill & Knowlton. He has  a BA degree in Mass Communications from the Royal Melbourne  Institute of Technology (RMIT) in Australia and joined Elsevier in June 2013.