After a long walk on the beach, following the attractive scent of a female, the male black widow enters a tangled web. Now begins the long work of wooing the female. The mating ritual involves dancing on the web to transmit vibrations, delicate stroking of legs, and even wrapping the female in a silk  ‘bridal veil.’ Soon, the complex courtship display takes a destructive turn: the male begins cutting out large sections of the web, bundling it up and wrapping it with his own silk.

This male black widow is attempting to convince a potentially cannibalistic female several times his size to mate with him. Destroying large areas of her home – and her sole means of obtaining food – is not the most obvious approach. So why do males do it, and why do females put up with  it? 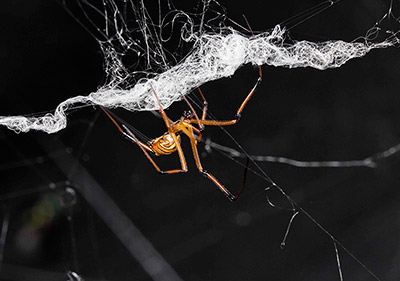 Postgraduate student Catherine Scott is describing the subject of her research: web reduction behavior in black widow spiders. Her new study, published in Animal Behaviour, shows  that by destroying parts of the female’s web, male black widows make it less attractive to rival males, decreasing competition for the female.

The western black widow spider – Latrodectus hesperus – is native to western North America. Female black widows are around 15mm long and black, with a distinctive red hourglass-shaped mark on the abdomen. The male is much smaller and a lighter tan color with a striped abdomen. Black widows build messy webs rather than  the uniform spiral-shaped webs of other species. They use these webs to communicate with pheromones; the female deposits pheromones on the silk when she’s ready to mate to attract males to the web.

“The silk pheromones that female black widows produce are like scent-based personal ads,” said Scott, lead author of the study, who did the research as a master’s student in zoology at Simon  Fraser University in Canada. “One whiff of the pheromone can tell a male about the age, mating history and even hunger level of the female. These complex chemical messages are just one part of the spiders’ complex communication system, and web reduction is a fascinating behavior that allows  a male to interfere with a female’s message.”

Competition for females is fierce: as many as 40 male suitors may arrive at a female’s web in one night. Because of this, males have developed ways to fend off the competition, such as guarding females and applying mating plugs. The new study shows for the first time in the wild that destroying  the female’s web is one such behavior, as it makes the web – and therefore the female – less attractive to other males.

The researchers let female western black widow spiders build webs in cages in the lab over the course of a week, and then took those cages to a beach on Vancouver Island where the spiders are found naturally. They removed the females from the webs, and compared the number of wild males arriving at cages  containing three kinds of webs: intact webs, webs with about half of the silk cut out and bundled up by males, and webs from which half the silk was cut with scissors and removed entirely. The aim was to see if removing half of the pheromone-laden silk is what made webs less attractive, or whether wrapping  the destroyed sections in males’ silk was also important.

The results showed that the female’s webs were highly attractive: in the first six hours, some intact webs had attracted more than 10 males. The webs that had been reduced by male spiders attracted only a third as many males as intact webs, showing that web reduction makes the web less attractive  and reduces the competition. And the webs that the researchers reduced were just as attractive as the intact webs, suggesting it’s more complex than just reducing the surface area of the web.

“Whatever the males are doing during web reduction is much more effective than simply reducing the amount of silk by half,” said Scott. “One possibility is that the female pheromone is concentrated in certain areas of the web, and males are bundling up those specific sections with  silk, which stops the pheromone from being released. The males could also be adding their own pheromones, which rival males avoid. We didn’t find evidence for a male silk pheromone in these experiments, but it’s definitely something we want to investigate further.”

In this 30-second video, the male western black widow cuts the silk threads of the female’s web, then pulls silk out of his spinnerets with his hind legs to wrap a section of the web that he has already gathered up into a ball in the middle of the frame. The video was made by co-author Dr. Sean McCann, a researcher at Thompson Rivers University in British Columbia, Canada.

She just sits back and lets it happen

Surprisingly, the females don’t seem to mind the destruction – in fact, they just sit back and let it happen. Scott and the team say the males’ behavior could protect the female from harassment, enabling her to get on with parenting.

Although they rely on their webs for capturing prey and protection from predators, as well as attracting mates, the female spiders don’t try to stop the males from destroying their webs; this could be because the behavior is helpful to the females. Each female only needs to mate once to have all  her eggs fertilized, but an intact web will keep sending out attractive pheromone signals to potential mates for another week. Web reduction could actually be saving the female from being harassed.

“Courtship in black widows is an hours-long affair, so several additional males may arrive at a web before the first male manages to copulate,” said Scott. “By reducing the web, the male is not only reducing his chances of competing with other males – he might also be doing the  female a favor. Web reduction may be giving her the opportunity to rebuild her web without pheromones and get on with reproduction, rather than wasting time and energy chasing away a parade of redundant male suitors.”

Sexual communication: it’s not that simple

Spiders have very sophisticated communication systems, which humans often don’t notice because they are so different to ours. In web-building spiders, communication is all about vibrations and pheromones. Web reduction behavior like that of the black widows occurs in several different spider species,  but it has rarely been studied. In the sierra dome spider, for example, males also use web reduction to monopolize females, but that may not be the only function of this destructive behavior. Some researchers have suggested that it could also be involved in male courtship signaling. There’s still  some way to go to truly understanding how it works and its role in communication.

“Our research reinforces the fact that animal communication is not always as simple as a female producing an attractive signal, then a male following it and finding her; it can be much more complex than that,” Scott said. “Here, the male is interfering with the signal and possibly  adding his own, aimed at other males, the female, or both. It might not just be for his own selfish reasons; he could be doing exactly what the female wants him to do by limiting harassment once she has secured a mate.”

Female spiders are very effective communicators – and behavior controllers. A recent  study in Behavioural Processes examines the communication that goes on between wolf spiders – Allocosa brasiliensis – during mating. Unlike many other species of spider, the female is smaller than the male, and it’s the female that goes in search of a mate. During  copulation, the female shakes her body, and this was thought to be a means of communication.

The researchers, from Universidad Nacional de Córdoba, Argentina, videoed 15 copulations in the lab and watched them up close. They found that by shaking, the females might be giving the males a positive signal to insert their pedipalps – the part of the spider’s anatomy that transfers sperm  – and ejaculate.

“For me, spider communication is fascinating,” Scott said. “It’s so cool to have the opportunity to study the behavior of these marvelous creatures and to start deciphering some of the conversations that are going on among individuals, shaping their love lives. We have to tune  in to a strange, sophisticated language of vibrations and chemicals to do so, and it’s a wonderful challenge.”

Read the articles in this story

Elsevier has made the followingarticles freely available until August 31, 2015:

Catherine Scott (@Cataranea)recently completed her MSc in the Grieslab at Simon Fraser University in Burnaby, BC, Canada. Her thesis was titled“Web reduction behavior and the chemical communication system of the westernblack widow, Latrodectus hesperus.” Catherinewill be joining the Andradelab at the University of Toronto Scarborough, Canada in September to workon her PhD. Catherine used to be terrified of spiders until working with themas a summer research assistant. She’s never looked back. You can read more about Catherine’s work, and herfascination with spiders, on her blog SpiderBytes.

After a few accidents, Lucy Goodchild van Hilten discovered that she’s a much better writer than a scientist. Following an MSc in the History of  Science, Medicine and Technology at Imperial College London, she became Assistant Editor of Microbiology Today. A stint in the press office at Imperial saw her stories on the front pages, and she moved to Amsterdam to work at Elsevier as Senior Marketing  Communications Manager for Life Sciences.