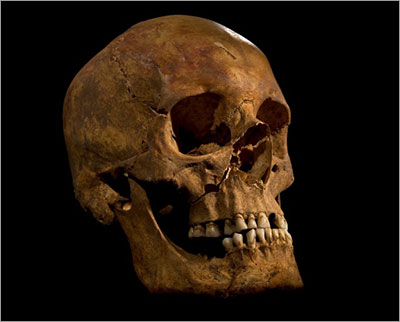 Last year, the remains of a skeleton found in a Leicester car park were confirmed to be those of the last Plantagenet king, Richard III. This discovery has opened the door for scientists to delve more deeply into his lifestyle as well as his origin and where he lived and traveled.

King Richard III was 32 when he was killed in the battle of Bosworth, the last battle of the War of the Roses, on 22 August 1485. According to later historical sources, his body was then buried in the Greyfriars monastery in Leicester, which was later destroyed by Henry VIII in 1538.

The latest discoveries, on Richard's lifestyle and diet, were detailed in an article  just published in the Journal of Archaeological Science (JAS). A large part of the research is still underway (for example, genome sequencing and osteological analysis), but recent isotope analysis attempted to outline a life history for Richard.

Researchers from the British Geological Survey and the University of Leicester analyzed various parts of the skeleton: two teeth and a small sample of the femur and a rib. Each of these parts forms at different times, thus giving us information about different periods of his life.

Co-author Dr. Angela Lamb, an isotope geochemist with the British Geological Survey, explained how material from bones and teeth can reveal information from different parts of the subject's life:

The teeth, for example, had formed during his childhood and adolescence, and their isotope composition doesn't change throughout an individual's life, while bone remodels such that the femur represents average conditions for the last 10 to 15 years, and the rib remodels faster and represents the last few years of his life.

The isotopes concur with Richard's confirmed birthplace of Northamptonshire, then suggest a move to the west of Britain by age 7 to 10. Carbon and nitrogen isotopes then confirm a high-status diet, similar to what any wealthy aristocrat would have eaten in Medieval times.

When analyzing the rib, which would reveal information about the later part of Richard's life, the team found an increased value of nitrogen isotopes, which is usually correlated with a change in dietary habits, specifically an increase in consumption of fresh-water fish and wildfowl, both common delicacies at the time. 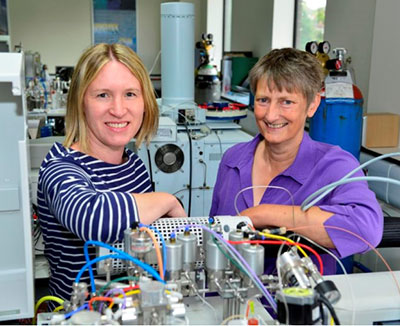 The researchers were surprised to find a significant increase in oxygen isotope during the last few years of his life. If this were an individual we knew little about, this finding could be attributed to a movement to the far southwest of England because of the changes in drinking water composition across the country. But we know from historical sources that Richard had not moved, since his movements when he was king are recorded in detail. Another explanation could be due to an increase in fluid intake, specifically wine – which we know was imported and available only to the very wealthy.

The significance of their research has implications for archaeology as well as history.

"This discovery not only tells us more about the lifestyle of a known individual," said Dr. Lamb said. "It provides a positive test for the isotope analysis technique to reconstruct a life history, which is still unusual in archaeology."

Meanwhile, history played a key role as the scientific drama unfolded. Although archaeologists usually try to study a population rather than a single individual, in the case of Richard III, we have historical documents that allow us to have much more details about him. Therefore, the archaeological hypothesis had to fit with the results from the scientific studies as well as the historical documents.

Historically, Richard III had always been a controversial figure: Shakespeare portrays him as a monstrous villain, locking in the Tower of London and subsequently killing his nephews, who became known as the Princes in the Tower.

Although there has been much interest in Richard III, including the eponymous play now staged in London with Martin Freeman, it wasn't until 2013 that science took on a key role. Screenwriter Philippa Langley of The Richard III Society wanted to somehow restore the King's memory, so she approached the Leicester City Council to request a proper archaeological search for his remains. Despite some claims that she "just felt (like she) was walking on his grave," the dig was carefully planned and implemented: First, a team from the University of Leicester researched historical documents to identify the area where the Greyfriars monastery would have been.

There was only a slim chance that Richard III's resting place would be found, due to topographical changes as a result of buildings and other more modern infrastructure. However, the value of adding to the knowledge of medieval Leicester was deemed to outweigh the risk of failure.

The remains of a church were indeed found, as well as a few skeletons buried in the ground. One of them was particularly interesting in that it showed evidence of scoliosis (a curvature in the spine) consistent with many contemporary descriptions that Richard III was a "hunchback," and some serious injuries consistent with death in battle. The body seemed to also have been placed in the grave with minimal reverence (his hands were probably tied), without a shroud or a coffin (despite common practice in medieval Leicester), and the shape of the grave suggested it had been dug hastily and not very carefully; the body seems too large for the grave itself and lies in an awkward position.

However, the only way to confirm with a sufficient degree of probability that indeed the human remains would have belonged to Richard III was to identify a descendant (through an all-female line) via historical records to provide DNA and compare it with the one found in the human remains. This was indeed done successfully.

The work is also a great example of how academics and other parties (local authorities, amateur enthusiasts) can work together to answer different questions – although as always in archaeology, the more questions are answered, the more are raised.

This article, in Elsevier's Journal of Archaeological Science, is published open access and is freely available:

This article is being featured by media worldwide. Here is a sample:

Dr. Ilaria Meliconi (@publish_advice) is the Publisher for Archaeology, Sociology and Political Science at Elsevier, looking after archaeology journals including the Journal of Archaeological Science. Before working in publishing, she studied Astronomy at the University of Bologna then obtained a D.Phil. in history of science at Oxford, specializing in 19th-century British scientific instruments and their makers. (She knows how to use a spectroscope but only if made before 1900.) She is based in Oxford, UK.

"As a former historian," she said, "I am particularly passionate about this research, which shows how enthusiastic amateurs and professionals from various disciplines can work together for the benefit of all."