The first trial to assess whether preventative treatment with HIV drugs could affect rates of HIV infection in people who inject drugs has found that daily tablets of tenofovir disoproxil fumarate (tenofovir), an antiretroviral drug, reduced HIV incidence by nearly half compared to placebo, according to new results published Online First in The Lancet.

A team of researchers led by Dr. Kachit Choopanya, the trial’s Principal Investigator, and Dr. Michael Martin, Chief of Clinical Research for the Thailand Ministry of Public Health–US CDC Collaboration, recruited over 2400 participants at 17 drug treatment clinics in Bangkok, Thailand.  Around half of the participants (1204) were assigned a daily oral dose of tenofovir, and half (1209) were assigned placebo.  All trial participants were offered monthly HIV testing and risk-reduction counselling and services, plus access to drug rehabilitation treatment. 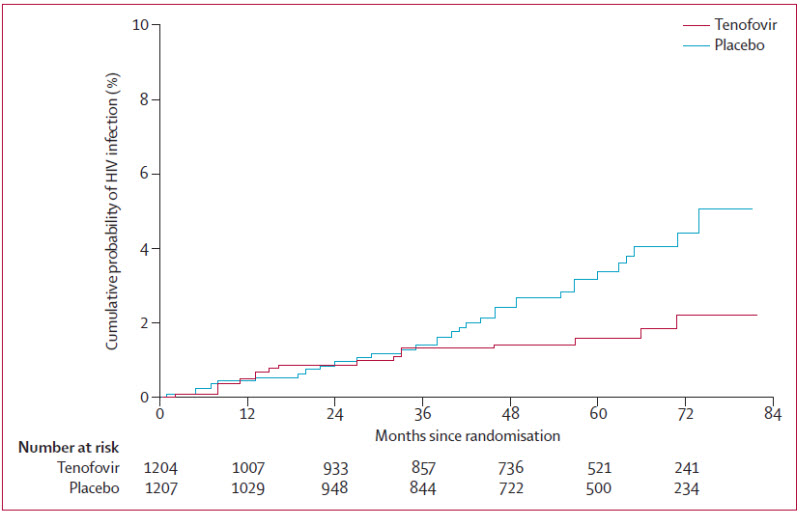 Participants were followed for an average of 4.0 years. Overall, 17 participants in the tenofovir group became infected with HIV, compared to 33 in the placebo group, indicating a reduction in HIV risk of 48.9 percent.  Further analyses of the results showed that the protective effect of the antivirals was best where participants adhered closely to the prescribing regime, reaching more than 70 percent in this subgroup.

Previous studies have established that pre-exposure prophylaxis (PrEP) effectively reduces sexual transmission of HIV in both heterosexual couples and men who have sex with men, as well as reducing mother to child transmission of HIV.  However, this is the first study to show that this approach is also effective among people who inject drugs.

According to Dr Martin: “This study completes the picture of PrEP efficacy for all major HIV risk groups – we now know that pre-exposure prophylaxis can be a potentially vital option for HIV prevention in people at very high risk for infection, whether through sexual transmission or injecting drug use.”

“Adherence was a key factor determining efficacy in our trial among people who inject drugs – as it has been in previous PrEP trials examining sexual transmission,” he added. “These results underscore the importance of helping people using pre-exposure prophylaxis achieve effective levels of adherence.”

Writing in a linked Comment, Professor Salim Karim, Director of the Centre for the AIDS Programme of Research in South Africa (CAPRISA), at the University of KwaZulu-Natal, pointed out that the reduction in HIV infections reported here may not be specifically attributable to a protective effect of the antivirals on people who become infected through injecting drugs. Some injecting drug users engage in risky sexual behavior, such as selling sex to fund their drug habit, so it is possible that the protective effect observed in this trial is at least partly attributable to the already established positive effects of PrEP on sexual transmission of HIV.

Even though questions remain about the extent to which PrEP can be effective in preventing either of the routes of transmission in this group, the overall result is that daily tenofovir does reduce HIV transmission in injecting drug users. The introduction of PrEP for HIV prevention in injecting drug users should be considered as an additional component to accompany other proven prevention strategies like needle exchange programmes, methadone programmes, promotion of safer sex and injecting practices, condoms, and HIV counselling and testing. 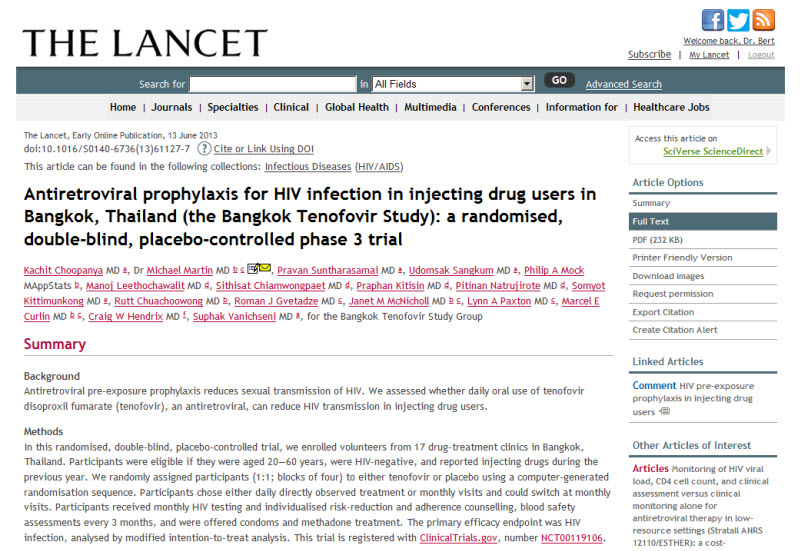