As senses wane with aging, it makes sense to enhance our foods, not just innovate their production

As the world's population ages, many people are experiencing an unexpected side effect of getting older. It's not as ravaging as the diseases that often come with aging, such as such as cancer, cardiovascular disease, dementia, diabetes, diverticulosis, hypertension, oral disease or osteoporosis. But it can accompany them – or just coincide with healthy aging.

It's called chemosensory decline. Taste and smell begin to decline around 50 years of age, with a more dramatic decline after age 70. For this reason, people may not enjoy foods and beverages as much as they did when they were younger.

In addition, about 80 percent of older people have at least one of the chronic diseases mentioned above — all influenced by food and nutrition and many exacerbated by sensory disorders, particularly chemosensory decline. That's because sensory disorders affect what people should be consuming to improve their conditions or prevent further decline.

Creating foods for the aging

Chemosensory decline in aging is well documented but not fully addressed. While the aging revolution is busy impacting people's lives by shaping individual taste preferences, food choices, nutrition and health, the food industry is playing catch-up.

Food manufacturers are actively pumping out new foods and beverages to help people live longer, healthier lives – products intended to prevent and reduce diseases, assist with weight loss and weight maintenance and make eating easier. Other than purees and supplements, alluring foods for the 50+ crowd are slowly emerging.

Culinary Nutrition: The Science and Practice of Healthy Cooking, by Jacqueline B. Marcus, is the first textbook specifically written to connect food science, nutrition and culinology. 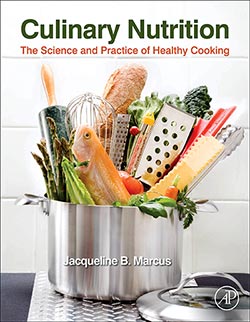 Culinary Nutrition uses real-life applications, recipes and color photographs of finished dishes to emphasize the necessity of sustainably deliverable, health-beneficial and taste-desirable products. With pedagogical elements to enhance and reinforce learning opportunities, this book explores the basics of proteins, carbohydrates, and lipids, issues of diet and disease, including weight management and food production and preparation topics.

The book is a finalist in the 4th IUFoST Global Food Industry Awards, which will be judged during the International Union of Food Science and Technology World Congress in Montreal, August 17-21. The award showcases the creative work of food innovators in the areas of packaging design, nutrition, enterprise, food safety and products.

We consume foods and beverages for countless, complex reasons that go well beyond hunger. Food memories evoke both pleasant and unpleasant thoughts, like the foods that mother lovingly prepared – or forced us to eat. The sensory signals that foods and beverages evoke cannot be understated. The elements that give food its character – its color, shape, texture and size, the sounds it makes, the aromas it emits and the tastes it provides – interact to create flavors that determine what we select and what we deny throughout our lifetime.

Paying attention to our sensory messages as we age may be more critical than we thought. Flavor enhancement has been shown to improve the sensory properties of foods and beverages, making them more acceptable to the aging. (I also address this issue in my two-part article "Targeting Aging with Nutrition" and "Foods for Aging" in The World of Food Ingredients, July/August and September, 2014)

Research demonstrates that appearance is still vital to the aging. Foods that appear very fresh, brightly colored, full flavored and seasonal are more appealing to diminishing senses since they elicit greater salivary, gastric, pancreatic and intestinal secretions which makes them easier to digest.

Likewise,presentation matters. Food should be placed in set layouts on plates with simple patterns or solid colors so that aging eyes can see food well and remember where to find it.

'All the food that's fit to 3D print'

Some food innovations seem to downplay the importance of appearance and presentation. For example, recent articles in Businessweek and the AARP Bulletin touted the benefits of using 3D printing technology to create food. Dutch printing presses are creating edible foodstuffs for people over the age of 50 with swallowing difficulties. Foods are pureed, then filled into the tank of an ink jet-like printer. The slurry is mixed to the proper consistency to formulate a reconstituted dish. The final product is marketed to look, smell and taste like the original food with "melt in your mouth" appeal.

The Businessweek article illustrated various printed food innovations (not exclusively for the aging):

Sound appealing? It's a matter of taste. A fundamental concept among nutrition and culinary professionals is:"No food is consumed unless it tastes good." Few foods look, smell and taste good without appealing sensory qualities that evoke multi-sensory responses.

Food marketers know that the sensory attributes of food are key for repeat purchases. Making healthy foods and beverages for the aging that look good and taste great are important challenges for nutrition, food science and culinary professionals. This is embodied in another fundamental concept: "No food is nutritious unless it is consumed." Sensory science helps pave the way. 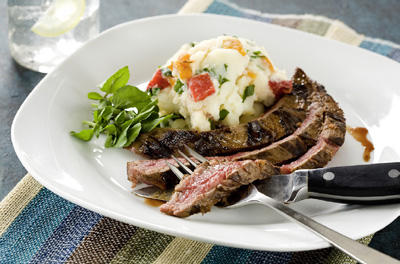 Rather than use printed foods and jeopardize the sensory enjoyment of aging people, these sensory enhancement techniques can be employed to make food more enticing:

1. Use ethnically correct foods in suitable arrangements with garnishes to complement diverse aging populations. Familiarity is appealing, comforting and safe.

2. Place portions inset layouts on plates with simple patterns and solid colors so that people who can no longer smell or taste well may still discriminate among foods.

3. Arouse hunger by covering a food tray or entrée with tented wrap or a lid. Remove the cover right before serving to release concentrated aromas; then encourage older eaters to take a big whiff. This causes saliva and gastric juices to flow which helps mastication and digestion and signals diners that there are more "good tastes" to come. This technique may be adapted by deeply inhaling food aromas right before eating.

4. Serve aromatic foods, such as freshly made cookies or chicken soup, to activate aging "smell memory" contained within the amygdala or "emotional brain" in the limbic system. Aromatic foods with pleasant memory may help soothe emotions, as demonstrated in patients with Alzheimer's disease.

6. Encourage careful chewing since digestion begins in the oral cavity where flavor molecules are released and carried by air currents for identification. Good mastication depends upon healthy dentition or proper fitting dentures. Some aging people who wear complete or palatal-covering dentures may have lower olfactory sensitivity than those who have their original teeth. Aging people tend to produce less saliva that affects how food tastes and feels. Aim for very moist foods that do not require forceful chewing. This means more braises, soups and stews and healthy sauces and dressings.

7. Combine familiar tastes with new tastes to broaden the range of foods and nutrients aging people consume. Flavor trends for the aging are skewing toward bolder, more enhanced tastes and textures. Individualize.

8. Contrast textures, sizes and shapes throughout a meal to reduce sensory fatigue or boredom. Alternating among bites of meat, vegetables and starch may also reduce sensory overload. The color and contrast among food and cutlery are also important to the aging. The shape, weight and size of flatware and the shape and size of glasses and plates may affect consumption behaviors and flavor perceptions.

10. Liberalize some diet restrictions with a few exceptions, such as renal disease, ascites, edema or coronary heart failure (CHF) that should be first reviewed by a health care provider. Strict fat and sodium restrictions may be relaxed in some situations. If people have lived a long time and their disease states are well managed through diet and medications, they may be able to relax rigid diet compliance to stimulate appetite.

Mashed potatoes are a beloved food of many aging people because they often bring memories of home. Usually laden with butter and salt, carbohydrate-filled mashed potatoes no longer fill many plates. These Garlic-Enhanced Mashed Potatoes have just enough garlic to perk up aging taste buds without offending them. Because they taste so good, less can be used—which means fewer calories, fat and sodium compared to mashed potatoes of former times. Potatoes contain protein and fiber, vitamins B6 and C, and the minerals copper, manganese and potassium. They are a nutritious side when prepared healthfully, like in this recipe:

Meals for the aging should appeal to all of the senses, not merely taste and smell. Touch and sound are other considerations in meal and menu planning.

Consider the somesthetics, or tactile sensations, of food. People who lose their sense of smell and taste may understand how familiar everyday foods are supposed to taste if they are provided with tactile cues for burn, cold, heat, movement, pain, pressure or other tangible sensations that we often take for granted.

The world's population is aging

The highest proportions of aging people reside in the US, Western Europe, Australia and Southeastern Asia.

Also consider integrating familiar sounds, including background music, jingles, even commercials that evoke pleasant food memories. Make sure the level is high enough to compensate for decreased hearing, but low enough to promote conversation and comprehension.

It is estimated that 50.9 million Americans will be hearing impaired by 2030. The World Health Organization (WHO) predicts that adult-onset hearing loss will be one of the top 10 diseases in the UK by 2030 – more than diabetes and cataracts.

On a personal note …

I'm all for innovation in nutrition, food science and the culinary arts as long as it brings us great tasting foods and beverages that inspire our consumption and contribute to our health and wellness.

I'm also a proponent of the sensory attributes of foods and beverages with their inherent flavor enhancement that we have learned to love throughout our lifetime. I'm a glutton for foods that look good and taste great and I want to dine like this for the rest of my life — and nourish my loved ones and friends similarly.

I think I'll take a pass on printable foods as long as my taste lingers. I plan to continue to bring the joys of food well prepared and presented to the aging table and celebrate the good memories and delectable experiences they evoke.

Jacqueline B. Marcus is a dietitian and culinary expert who specializes in taste and flavor enhancement throughout the lifecycle, from young eaters through the aging. She is President/Owner of Jacqueline B. Marcus and Associates Food and Nutrition Consult­ants in Highland Park, Illinois. Her latest book, Culinary Nutrition: The Science and Practice of Healthy Cooking (Elsevier, 2014), was shortlisted as a finalist for both the Gourmand World Cookbook Awards and the International Union of Food Science and Technology (IUFST) Global Food Industry Awards..

Marcus was Culinary Nutrition department chairperson of The Cooking and Hospitality Institute of Chicago (CHIC) and Kendall College School of Culinary Arts and Chairperson of Food and Culinary Professionals (FCP) and Sports, Cardiovascular and Wellness Nutrition (SCAN) of the Academy of Nutrition and Dietetics (AND). Her work has been featured in publications including Food Technology and Food & Nutrition Magazine(July/August, 2014 cover story) and Modifying Flavour in Food (Woodland Publishing, Limited, 2006). Her company's website is thefitfoodpro.com, and you can find her on Facebook, LinkedIn and Twitter.

Here, she writes about making foods appealing to the aging palate – with tips and techniques that seem to run contrary to the recent innovation of 3D printing foods – using examples from her book Culinary Nutrition.