The @UN Deputy Secretary-General writes about why toilets matter

Why do toilets matter? They matter because they prevent disease and malnutrition, helping children to survive and thrive, communities to flourish and nations to prosper. Every dollar spent on sanitation brings a five-fold return in health and productivity. That is why, community by community, town by town, country by country, we need action to provide sanitation for all.

Today, more than a third of the global population – 2.5 billion people – lacks access to this essential life-saving facility. More than 1 billion people still practice open defecation, which is one of the main causes of diarrhea. 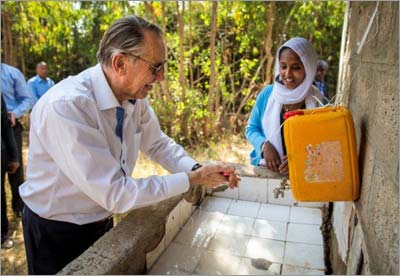 Young children are the most vulnerable. Every day, diarrhea caused by unsafe water and inadequate sanitation and hygiene kills more than 1,400 children under the age of five – one child a minute. Diarrhea is also closely linked to under-nutrition, which in turn is linked with more than half of all under-five deaths. Under-nourished children have poor immune systems and are at high risk of pneumonia, which kills more children than any other disease. Those who survive are often physically and mentally weakened.

Half of the 120 million children born each year in developing countries will live in households without access to improved sanitation. It is clear that inadequate sanitation is at the beginning of a chain reaction that goes to the heart of all our development objectives. That is why I launched a Call to Action for Sanitation last year on behalf of the UN Secretary General.

I see two priorities for action.

First, let us all commit to eliminating the practice of open defecation by 2025. We know what works. Some countries have tackled this problem within one generation; others are making significant progress. Let us learn from their experiences and get the job done, country by country.

Second, everyone should become engaged. National and local governments need to lead by making commitments on sanitation and by allocating the necessary financial and human resources. Businesses need to invest in sanitation – and to understand how this benefits them through enhanced productivity and entrepreneurial opportunity. Finally, we need civil society organizations to monitor progress on the ground, keep up the pressure and make sure no-one is left behind. 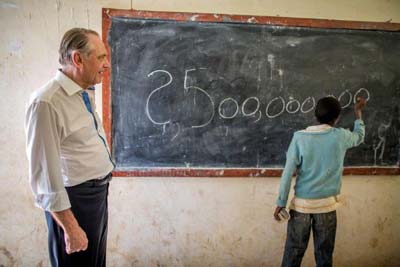 On Friday, in connection with the World Bank Spring Meeting, I will co-chair the High-Level Meeting of Ministers of Finance, Water and Sanitation as part of the Sanitation and Water For All initiative. I expect governments to outline how they plan to address this global crisis. I want to hear their progress and their commitments.

United Nations Member States are now working to finalize a new sustainable development agenda to follow the Millennium Development Goals (MDGs) adopted at the turn of this century. The MDGs have successfully mobilized action across a broad range of development areas. More girls are in school; many women have safer pregnancies and healthier babies. Diseases such as malaria, tuberculosis and HIV-AIDS are in decline, and less people are poor and hungry.

But we are way off track on sanitation.

The people of the world cannot afford the status quo. Poor sanitation costs developing countries between 0.5 percent and 7.2 percent of their Gross Domestic Product.

But sanitation is much more than economics. It is about health, dignity and progress. No woman should risk sexual abuse because she has no safe toilet. No girl should stay away from school for want of a decent facility. No baby should fall sick for lack of sanitation and hygiene.

As we look ahead to the period after the 2015 MDG deadline, we must understand that toilets matter. Let us commit to end open defecation and provide adequate sanitation for all. We must take seriously the vision and challenge of creating a life of dignity for all.[divider]

Video: 'A Call to Action on Sanitation' 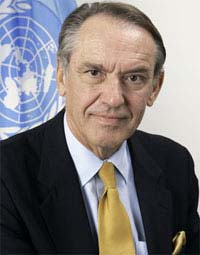 Prior to this, Eliasson served as Chair of Water Aid/Sweden and a member of the UN Secretary-General's Advocacy Group of the Millennium Development Goals.

His diplomatic career with the UN spans more than three decades, during which he has taken part in humanitarian efforts in Europe, the Middle East and Africa. Eliasson was the first UN Under-Secretary-General for Humanitarian Affairs and was involved in operations in Africa and the Balkans. He took initiatives on landmines, conflict prevention and humanitarian action. From 1980 to 1986, he was part of the UN mediation missions in the war between Iran and Iraq, headed by former Swedish Prime Minister Olof Palme.

From 1988 to 1992, he was Sweden's Ambassador to the UN in New York and also served as the Secretary-General's Personal Representative for Iran/Iraq. A veteran in the fields of diplomacy and foreign relations, Eliasson served as State Secretary for Foreign Affairs from 1994 to 2000 — a key position in formulating and implementing Swedish foreign policy.

He was Sweden's Ambassador to the US from 2000 to 2005, and served as President of the 60th session of the UN General Assembly. In 2006, he was appointed Foreign Minister of Sweden, serving in this capacity until the elections in the fall of 2006. From 2007 to 2008, he was the Special Envoy of the UN Secretary-General for Darfur.

Eliasson graduated from the Swedish Naval Academy in 1962 and earned a master's degree in Economics and Business Administration in 1965. Read more about him on the UN website.

Great article! Thanks for posting.