'SuperAmma' to the hand washing rescue

Cartoon supermom could limit infection and save lives by swaying people around the world to make a habit out of hand washing. 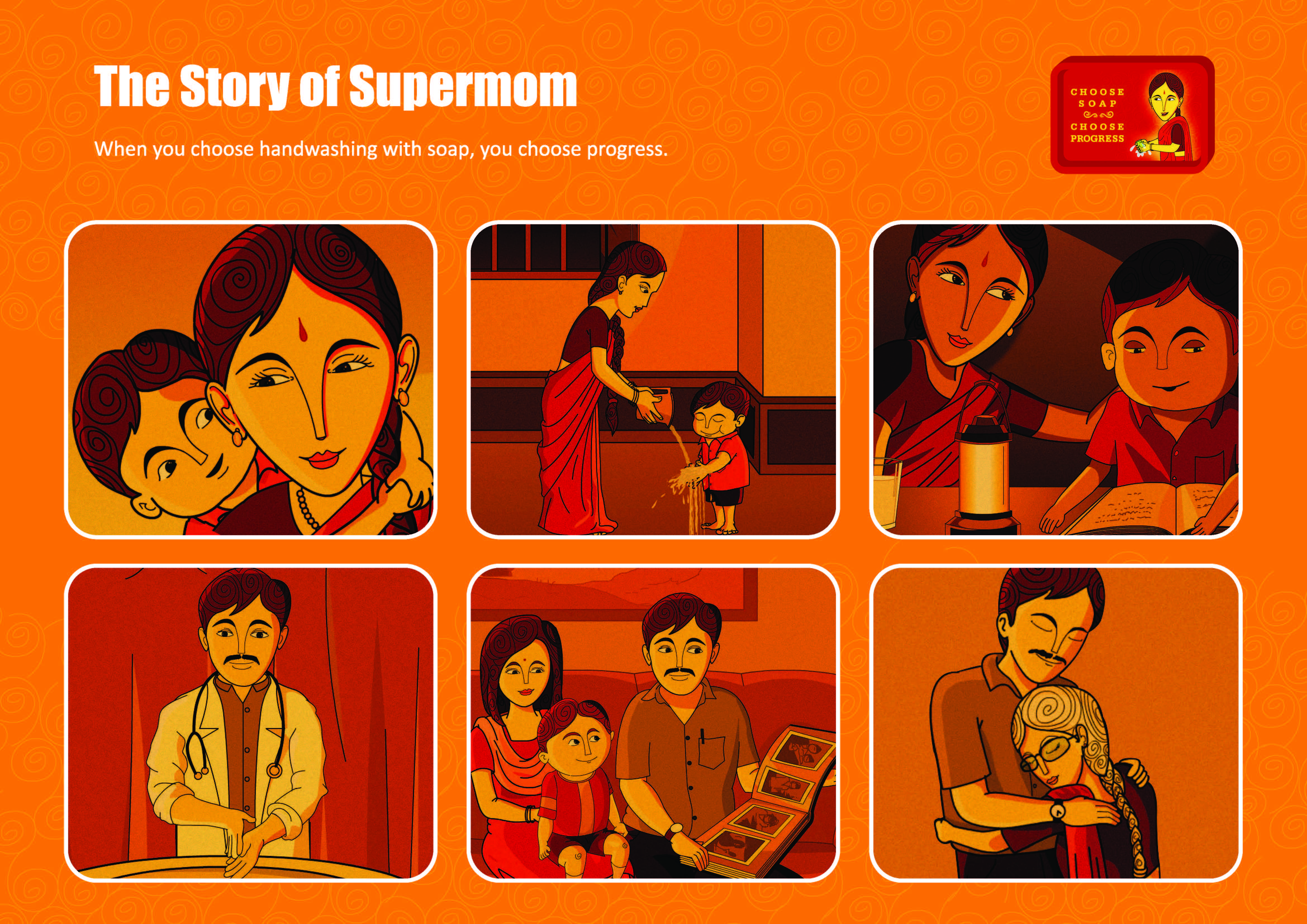 Every year, almost a million children die of diarrhea to say nothing of respiratory and other infections. Many lives could be saved if only there were a way to get people in the habit of washing their hands with soap and water, even in places in the world where those two basic resources aren't readily available in the next room. A team of researchers led by Dr. Adam Biran, reporting in The Lancet Global Health, have found a way, and her name is SuperAmma.

"SuperAmma means Super Mum; she is the central character in our campaign" said Divya Rajaraman from St John's Research Institute in Bangalore. "We see (in a film developed with the help of a creative agency) how she cares for her child, but we build in hand washing without talking at all about disease or germs. We talk about the fact that the child needs to brush his hair, needs to say his prayers, he needs to greet people politely, and wash his hands, so it's sort of snuck in there."

And, it worked. When people were shown the film along with skits in which children were offered sweets either by the wonderful, hand washing SuperAmma or a slovenly and disgusting male character, they began to wash their hands more.

In the beginning, hand washing with soap was virtually nonexistent in the 14 villages in India where the researchers focused their effort, Rajaraman says. After the trial, hand washing rose to 19 percent (a 15 percent increase) in the group that had received the intervention. Six months later, that number rose even higher to 37 percent hand washing at key times, such as before food preparation or after using the toilet. They then offered a shorter, two-day intervention to those in the control group to find a year later that 29 percent of people in both groups had made a habit out of hand washing. 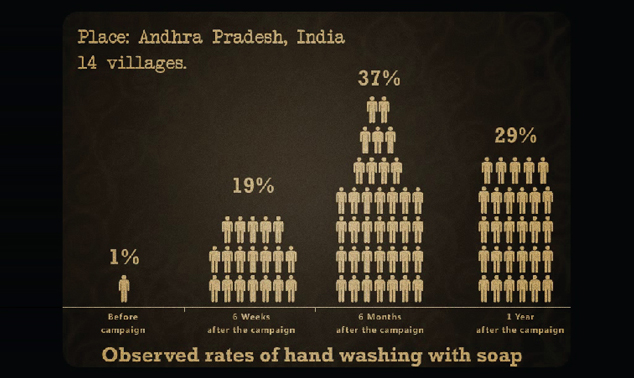 "What we've found before in a lot of health promotion campaigns is they don't really achieve behavior change and that's because often they focus on health education," explains Katie Greenland of London School of Hygiene & Tropical Medicine.

In other words, they appeal to our heads instead of our hearts. The SuperAmma campaign she and her colleagues developed focused instead on emotional drivers of behavior change: the most basic factors that influence decisions, including our motivations, our sense of disgust, and our very human desire just to fit in.

Greenland says they now hope to give their two-day intervention a try in a larger group of people. And, there's reason to think that the changes they instilled could really stick, maybe even grow.

"Much of the change we saw was in children," she said. That's important because they can develop good hand washing habits and eventually pass them on to future generations.

In a world that can sometimes seem to spin out of control, isn't it reassuring to realize that something so simple as soap, water, and a compelling story could make such a big difference for so many people? Who knows, perhaps your house could use a visit from SuperAmma as well?

A Conversation with Katie Greenland 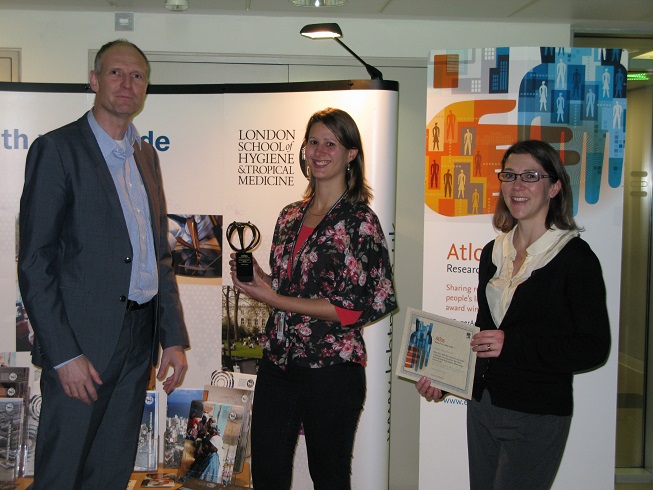 To dig a little deeper into the SuperAmma campaign, we had a few more questions for Katie Greenland, one of the authors of the research, to find out what most impressed her during the SuperAmma campaign and where the hand washing effort is headed now, both in the Indian villages where it all began and beyond.

In this podcast Nicolai Humphreys from The Lancet Global Health is joined by Katie Greenland to discuss the effect of a behaviour-change intervention on handwashing with soap in rural India.

Given all of the challenges we hear about in the news everyday – from Ebola to economic downturns - it's kind of amazing to realize just how much good can come out of something as simple as hand washing. How do you think about your work in this context?
It's true that hand washing doesn't usually make the headlines! It's easy to overlook the potential contribution that such a seemingly mundane practice can make to public health. I actually find the simplicity of hand washing to be part of its draw: it doesn't require any fancy technology or systems-level intervention, and it gives people a chance to do something towards preventing illness, and even death, in their family.

Even if hand washing is simple in principle and even in practice, I gather it isn't so simple to inspire people to wash their hands. How did you approach this problem in a way that's different from most public health campaigns?
Hygiene promotion interventions are often unsuccessful at changing behavior or initial change is not sustained. A key reason for this is because many campaigns focus on educating people about germs and illness, but in reality people are generally driven to wash their hands for other reasons, such as when they are visibly dirty or sticky. Recognizing that hygiene behavior is determined by many factors, we decided to steer away from germs and disease and focused the SuperAmma messages on emotional drivers of behavior. We engaged with people using the motives of 'disgust' at dirty hands and at people who do not wash them and 'nurture' to insert hand washing into the nurturing mother-child relationship.

Did anything that you observed in the SuperAmma trial really surprise you?
We were surprised – and delighted – to see that the intervention effect was still apparent 12 months later as sustaining levels of behavior change is a challenge for a lot of programs. We modified the initial four-day intervention so it could be delivered over two days and were also pleased to observe that it was possible to achieve a similar effect with a scaled-down version of the intervention.

What is the status of the SuperAmma campaign in the communities where you did the work?
Our recently published process evaluation (Rajaraman et al., BMC Public Health) shows that the intervention was memorable and acceptable to the community. For example, we saw high attendance at community events and good recall of campaign messages, and the campaign song and SuperAmma character received very positive feedback from children and adults alike. Although the campaign was intended as a short duration intervention and is no longer running, we hope that the intervention is still a part of people's lives and are pleased that the government and other NGOs have shown interest in taking SuperAmma to other communities.

How do you hope this campaign will be put to use, either directly or as inspiration for other efforts?
This campaign was a proof-of-concept trial, to demonstrate what could be achieved through the creative use of non-health messages. The materials and methods we used are freely available at www.superamma.org as a resource for others working on behavior change in similar settings. We hope people will take these, use them, adapt them and evaluate and share their results so we can continue to learn and improve our approaches. We are already using our experiences from this to work on a similar intervention in sub-Saharan Africa.

What for you is the simplest, take-home lesson from SuperAmma that we would all do well to learn and apply?
Behavior change is an essential part of almost every public health program. Simple, emotive messages can be a more powerful way to change behavior than lecturing about health benefits.

Is there anything else you'd like to say?
This trial would have not been the success it was without the input of a wide range of hand-working people, particularly our local researcher collaborators. We also benefited from working with an excellent local creative agency, Centre of Gravity, who developed the intervention and thus played a critical role in the success of the trial.

Katie talks about the SuperAmma campaign which uses nurture and disgust tactics to get people in rural India washing their hands. She also tells us what receiving the Elsevier Atlas means to the project team.

About The Lancet Global Health

The Lancet Global Health features high-quality original research and commentary on a range of topics as they pertain to low- and middle-income countries, including reproductive health, child and adolescent health, and disease.

What did the Editor of The Lancet Global Health, Zoë Mullan, have to say about the research?

"Handwashing with soap is known to prevent pneumonia and diarrhoea – two of the world's biggest killers of children. The question is, how do you instill the habit in people with no bathrooms in their homes and where open defecation in the surrounding fields is the norm? The SuperAmma study by Adam Biran and colleagues took a novel approach to this vital question. Their multicomponent intervention played on emotional drivers of behavior such as disgust, nurture, affiliation, and status; handwashing frequency improved six-fold after 6 months. The study shows that, by "pushing the right buttons", people can be persuaded to change long-standing unhealthy habits. More of these tailor-made, innovative interventions are needed in global health."

All of the SuperAmma campaign materials are freely available for use or inspiration online at www.superamma.org