Viruses in a sample can be concentrated using simple magnets

Each month the Elsevier Atlas Award recognizes research that could significantly impact people's lives  around the world.

The Ebola virus has ravaged communities across West Africa, killing more than 11,000 people since March 2014. A highly pathogenic virus, Ebola has no cure and treatment is challenging.

Several public health measures were put in place at the start of the epidemic, including isolation and quarantine. But for these measures to work, people need to be diagnosed early and accurately. A new Ebola test described in Biosensors and Bioelectronics could offer doctors the solution they need.

Knowing who is infected with the Ebola virus is fundamental to its control, so healthcare workers need suitable Ebola tests to use in the field. Currently, two tests are available for the virus: one is based on the polymerase chain reaction (PCR) and requires complex, expensive equipment. The other, called the colloidal gold strip test, uses antibodies attached to gold nanoparticles to identify viruses in a sample. However, it is not very sensitive and often gives inaccurate results.

In epidemics like this one, resources are under pressure, making it difficult to test people using expensive equipment. This gives researchers a challenge: to come up with a new test for the Ebola virus that can be used easily in the field, without putting any additional strain on resources.

Professor Xiyun Yan and her colleagues from the Chinese Academy of Sciences have met this challenge, by developing a new test that uses magnetic nanoparticles to detect the Ebola virus in a blood sample.

Nanozymes are tiny molecules that act like enzymes and are magnetic. By priming them to recognize the Ebola virus, Prof. Yan and her colleagues could effectively attach viruses to these tiny magnets in a sample, then concentrate them using a simple magnet.

“Nanozymes are exciting particles that have many uses,” said Prof. Yan. “We found that by replacing the gold nanoparticles in the colloidal gold strip test with our magnetic nanozymes, we could not only detect the virus in a sample but also concentrate it, making the result much clearer and easier to read.”

In fact, the approach is so successful the test is easy to read with the naked eye. It is able to detect molecules on the surface of the Ebola virus at concentrations as low as 1 nanogram per milliliter, making it 100 times more sensitive than the colloidal gold strip test.

“This is a most timely and useful contribution to the field,” commented Professor Anthony P. F. Turner, Editor-In-Chief of Biosensors & Bioelectronics. “Rapid diagnostics such as this are at their best when there is an immediate action that needs to be taken. The case of Ebola must be one of the most urgent such needs that can be envisaged.”

The test is now being trialed in the field, and the researchers are awaiting the first results.

“We’re very excited that our test is being used in West Africa,” said Prof. Yan. “We look forward to seeing the initial results and hope it will make a real difference to people affected by the epidemic.”

Following the publication, Dr. Yan and her colleagues have also been contacted by a number of companies to develop the test for different viruses, including influenza and HIV. One company has produced a pocket-sized machine that instantly analyzes the test strip’s display to produce a number reflecting the amount of the virus in the sample. The researchers hope this will help make the test even more useful for doctors.

A conversation with Dr. Xiyun Yan 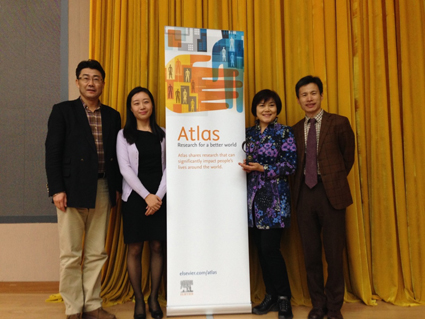 We talked to author Dr. Xiyun Yan, a professor at the Chinese Academy of Sciences, to find out what’s special about the new Ebola test, and what’s next for the technology.

In this podcast Dr. Xiyun Yan talks about a new Ebola test based on a nanozyme strip.

What led you to develop this test for Ebola?
In West Africa, diagnosing Ebola infections is the only way to stop the virus from spreading. With PCR and ELISA, the technology people normally use is hi-tech, and you need fancy equipment. But in these poor areas, it’s better to have easier, faster, more economical, local tests. There are different methods of diagnosis – PCR and ELISA. With both PCR and ELISA there are many steps, and these need equipment. But with the nanostrip you get a signal immediately; it can be detected with the naked eye.

What is the advantage of the nanozyme strip?
The nanostrip has two characteristics. The first is that it’s magnetic – you don’t need a centrifuge, it just targets the Ebola virus and using magnets you can enrich the virus. And secondly, the nanozyme can act as an enzyme to give stronger signaling. The advantage is it’s a cheaper, easy, faster, local test. This method overcomes the previous problem of the lower sensitivity of the traditional strip. In this case, we use nanozymes, which give a very strong signal – it’s 100 times stronger than that of the traditional strip. It’s a technological revolution.

How does the nanozyme strip work?
In the traditional strip, people use gold. Now we use nanozymes instead. It’s based on our discovery of magnetic nanoparticles with enzyme activity. This discovery is very important; we published it in Nature Nanotechnology in 2007. The nanostrip is one of the applications based on this discovery. We use the nanozyme instead of an enzyme, because the nanozyme catalysis activity is equal to that of a natural enzyme.
The preparation of an enzyme is expensive, but the nanozyme is stable and cheaper and you can use it like an enzyme. It’s also very easy to store – you don’t need to keep it in the refrigerator, you can just store it at room temperature for as long as a year and it will still have a very high level of activity. That’s the advantage of the nanozyme strip, especially in West Africa. 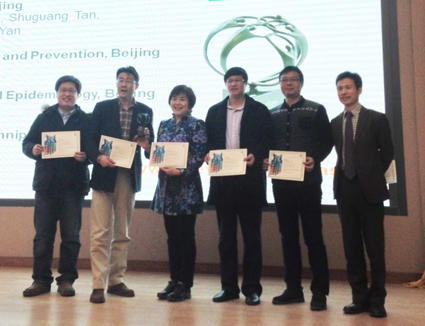 What are you working on to develop the test further?
Since this paper was published, we have received a lot of emails and letters from everywhere – from America and Canada – from companies that would all like to collaborate with us with this nanostrip. For instance, there is a company that wants to test for HIV. So now we’ve got a lot of collaborators to test the real virus in patients. Now we also have a collaboration with a hospital to test the Ebola virus technology – it’s a new platform, which will be useful for many different applications. The good thing is one company has a patent out, and now they’re doing the pre-clinical trials. They plan to get it into clinical trials next year.

Can you tell us about the machine one of the companies is making?
For this nanostrip, they are making a machine – it makes it very easy to get the test results. The machine is very simple; because the strips are very sensitive, you can see positive or negative results with the naked eye and you don’t really need a machine. For the Ebola virus, that’s ok because doctors just want fast feedback. But the company wants to use the test for many other things – they want a number: how many Ebola viruses are there in the sample? How many flu viruses? How many HIV viruses? We want to provide that number. So the company made a small pocket sized machine. You get the strip, you put it in the machine, and the machine immediately gives you a number – 10, 8 or 20 – that tells you how many viruses are there. The doctor thinks if you want a precise diagnosis, it’s better to have not only positive or negative but to get the number. And also now it’s already ongoing in pre-clinical trials for HIV, influenza and Hepatitis B testing.

About Biosensors and Bioelectronics